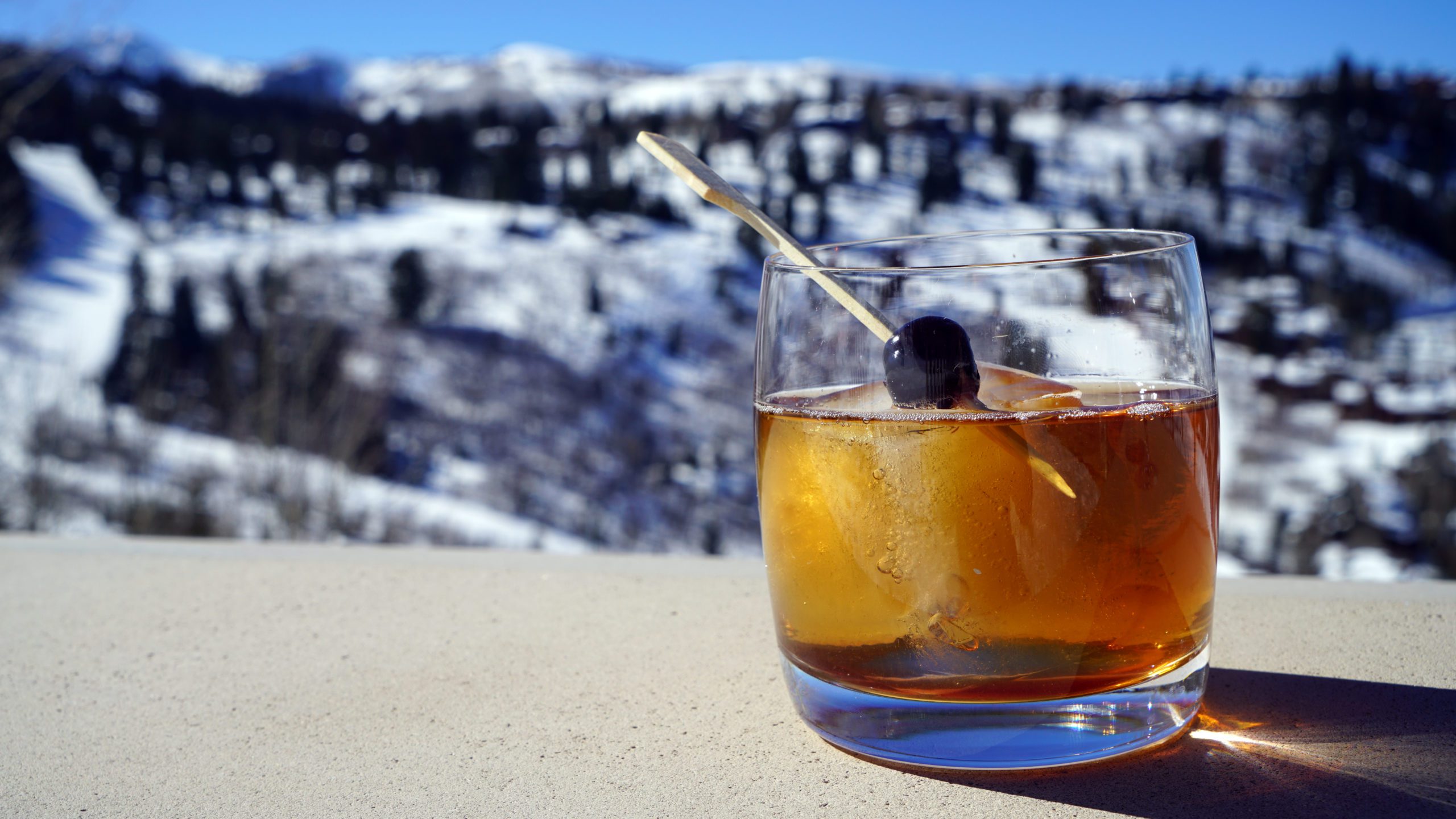 “Alcohol may be man’s worst enemy, but the Bible says love your enemy.”
Frank Sinatra

He was a wise man, that Frank Sinatra. And a well-travelled one too. On and off planes. In and out of hotels. And definitely, to and from bars. The last time the late, great crooner graced Salt Lake City was in 1991 and the bar scene here has definitely grown since. We teamed up with Expedia.com to raise our glasses to Old Blue Eyes and go bar hoppin’ to some of the coolest hotel bars in the area—be they a step off the elevator or a few doors down the street—these bars are gathering places for travelers and locals alike.

A STEP OFF THE ELEVATOR

Let’s start with The Vault located on the first floor of the Kimpton Hotel Monaco in the heart of downtown Salt Lake City. Kimpton Hotel Monaco has more than 200 rooms and is across the street from the Capitol Theater, steps from the Salt Lake Convention Center and just around the corner from the brand new Eccles Theater. The hotel hosts business travelers and families on vacation. (You might even see a wagging tail in the lobby as the Monaco is pet friendly.)

The Vault, Monaco’s bar, has been described as a sophisticated-meets-playful hidden treasure. The bar boasts cutting-edge craft cocktails with a culinary flare. Sitting next to Bambara, the hotel’s critically acclaimed and locally loved restaurant, one might notice fun cocktail concoctions that seem to come straight from the kitchen. Executive Sous Chef Brian Kenney and Lead Bartender Andrew Abeyta have developed a friendship from being separated by a swinging door. “Having the bar is super nice,” says Kenney. “Andrew gets to use all our kitchen ingredients and we get to play with all their great alcohol.” You might find wine in the entree sauces or Togarashi pepper seasoning the drinks.

So be it after a long day at the convention center or after a soul-moving night of entertainment—slide up to the bar and unlock your tastebuds at The Vault. On the right night, you may even hear the dancing notes from a street busker outside serenading the skyscrapers.

If you are more interested in a mountain experience, take a short drive up Parley’s Canyon, swing around the roundabout just beyond Park City‘s Main Street, then go up the side of the mountain by funicular—you will find yourself sitting at the St. Regis Bar located at the St. Regis Deer Valley.

The bar speaks of modern mountain elegance with a familiar vibe. It’s only been open since 2009, but has an atmosphere of having been here forever. Whether you are traveling for work or for pleasure, General Manager Chris Okamura stresses the resorts’ attention to making every guest feel like this is their home away from home. “We truly believe in bringing people into the St. Regis family.” In short order, bartender Brett Peretti welcomes new guests on a first-name basis.

The bar sits just off of the Deer Valley Ski Resort. Guests can even ski up to the bar’s outdoor terrace for some slope-side satisfaction—complete with table-side service, two giant bonfires, and a stunning view of the Deer Hollow and Deer Valley ski runs. The bar is open year round, so whether you’re a snow bunny hitting the slopes with the family or on a summer corporate retreat—come eat, drink and enjoy life at 7,452 feet (not incidentally the name of the bar’s fantastic bloody Mary). Besides your mature tastebuds won’t be disappointed. The St. Regis bar has over 800 selections of wine, is the highest seller of High West Whiskey in the world and carries 6 different local breweries from all over the Salt Lake area.

After a heavy day of skiing the best powder in North America, kick off your ski boots for après ski at The Cliff Lodge’s Aerie Lounge. The second you step off the elevator on the 16th floor of the tower, you will be greeted with a floor-to-ceiling 180 degree view of the north facing Baldy and Hidden Peak trails of Snowbird ski resort. The stunning view leaves no doubt that you’re in the high alpine. Bartender, Gary Jones, understands the silky white draw of the Wasatch Mountains. “I’m addicted to skiing the mountains and the snow’s in my blood. Just driving up the canyon will put me in a good mood. I ski. I shower. I go to work.”

The Aerie Lounge is casual in an up-scale setting. It’s ski attire right after the lifts close, but as twilight turns into night, the bar becomes a swanky lounge. Hang out in one of several relaxing oversized chairs or chat up a mixture of local ski bums and world travelers while you enjoy live music and sip a version of High West Rendezvous Rye sold only at the Aerie Lounge. Nope, you can’t get it anywhere else in the entire world.

The bar is open 365 days of the year, has the second largest wine menu in the state (second to J&G Grill up at the St. Regis) and has fun specials during the week, such as Martini Monday or Whiskey Wednesday. But truly, you can’t beat the view or ambiance and if you’re not staying onsite—it’s a great place to come to wait out the “red dragon.” (The nine-mile long stop-and-go traffic down the canyon after last chair.)

A STEP DOWN THE STREET

Okay, you are staying in Salt Lake City and maybe your hotel doesn’t have a bar, but you’re not ready to call it a night. Stop in at Squatters Brew pub, a local favorite for some appetizing pub food and some locally brewed beer. Squatters has been around for 28 years and is Salt Lake’s original brew pub. It definitely feels local with an urban downtown vibe in an old warehouse. You’ll look directly into a brewing room from the downstairs bar.

Throughout the year, you will find seasonal beer options that sometimes are only offered for a week or two. Brewmaster Jason Stock says the great thing about working at the downtown Squatters location is being the test kitchen for the entire company.  “I get to be creative with flavor profiles which is the fun part. I didn’t think I’d ever make a strawberry rhubarb beer.” (A popular drink that fleetingly graced the menu last year.) “Beer is diverse. If you don’t like beer, you haven’t tried the right one.” Stock’s favorite beer’s include the Off Duty IPA and the Hoppy Pilsner—and if you look closely on the Hop Rising, you might see his face smiling back at you.

Squatters is all about high-quality malt, and fresh hops, making any beer you choose off the menu a gold medal. If you aren’t a beer person, they’ve created some very enticing beer cocktails. Bartender Jessica Means, loves her beers: “Beer to me is my best friend.” But she also knows how to make a killer beer cocktail. Don’t worry they don’t taste like beer, but they do use the flavors from the beer to enhance the cocktails and add a hint of carbonation.

Off Duty IPA, Hoppy Pilsner or the Full Suspension IPA

It’s not New York and it’s not L.A., but the Red Door will have you feeling like you just stepped into a night club on the coast. Owner, manager and bartender Louise Hannig has lived all over and wanted to bring a little bit of posh night life to Salt Lake City. She has been doing the bar scene for 30 years. She says she “got through school working the night life” and couldn’t think of living life any other way. You’ll find her behind the bar four nights a week. Hannig doesn’t like to be called a mixologist. Barkeep’s better, but we just call her the liquid chef.

Hannig makes her own wine, simple syrup, and Luxardo cherries. “I’d never done it. So I thought why not? After hours are meant for experimenting,” which is how a favorite drink called the Wrath came to be a staple on the menu. It’s made with Jalepeno Tequila, simple syrup, cilantro, orange liquor and tequila. And she won’t hold you to any expectation of drinks. In fact, she extenders her mantra of individuality to her customers and will never judge nor expect anyone who sits at her bar to drink a certain way or to like a certain thing—regardless of trends. “Whatever you want to mix with whatever you want to mix with is what you want to mix. If it’s your preference, then it’s gonna be good for you.”

The Red Door is chill and laid-back, but with an upscale atmosphere. It hosts a mixture of business travelers and regulars. Being situated across the street from the Salt Palace Convention Center in the theatre district, Red Door is perfect for a quick after-event drink. It caters to a mature crowd. “It’s not a meat market,” Hannig assures. “You can be by yourself, as a couple or with friends.” There is live music on Saturdays and a DJ Thursday and Fridays. You might hear a local jazz band or members of the Utah Symphony.

So pass through the Red Door and forget you are in Salt Lake for a moment. “A night out is a step away from reality for just a moment.” A mischievous smile appears on Hannig’s face. “Get a little crazy, but not too crazy.”