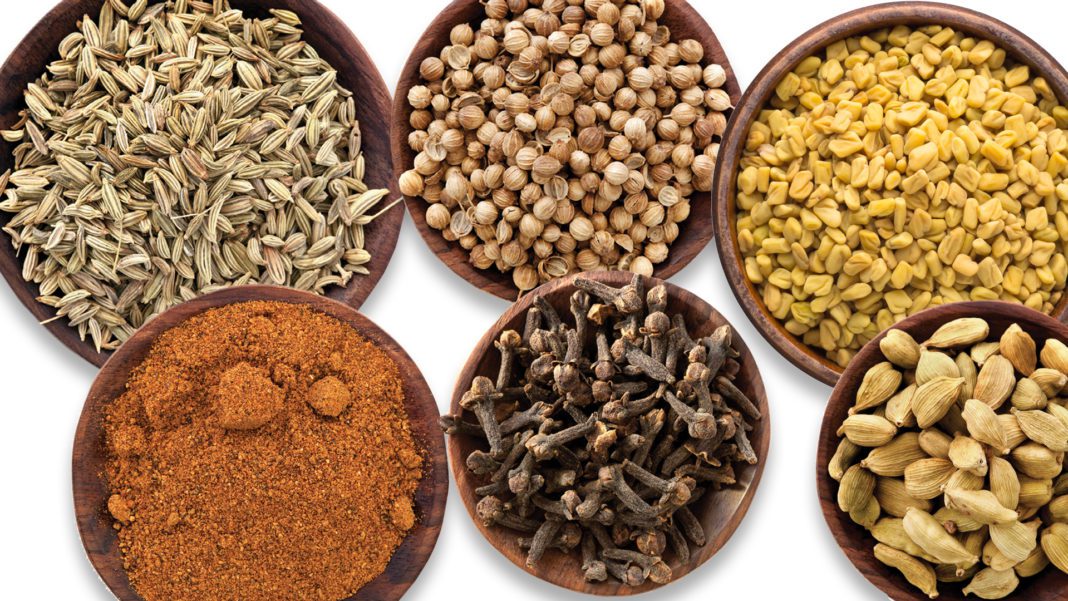 6 Indian Spices to Add to Your Cabinet

If you open a typical spice cabinet in the U.S., you’ll find a handful of small plastic bottles. Prominent up front will be granulated garlic, some dried basil, chile powder, sage left over from Thanksgiving one year, rosemary, cilantro, cumin—possibly cinnamon and nutmeg for baking. Open a spice cabinet in India, and it’s an entire world of spices and herbs and potions—secret family blends, medicinal vials and packets of seeds. The cost of these Indian spices are breathtaking compared to America’s. Chefs who travel have been known to carry theirs in a locked case. The flavors they create, evocative of all things exotic about India, can be incorporated into anyone’s kitchen. Here’s a rundown of favorites and ways to use them.

Not really seeds, but a fruit pod of the plant that resembles parsley. They’re quite fragrant, bitter when eaten raw and spicy (i.e. hot). They’re used in breads, specifically parathas, and in dishes with green beans or lentils.

These are used medicinally, especially for mouth pain. Used in savory and sweet foods, they are an important part of the dry “master blend” called garam masala. Indian chefs cook them in oil to release their oils, along with peppercorns, cinnamon and cardamom. This mixture shows up in curries and simple rice pilafs.

This spice is found in nearly every Indian kitchen. The round seeds (from the coriander plant) are roasted in a dry pan over high heat until they pop and move in the pan. They’re then ground and used often with chicken and fish dishes; the citrus flavor complements both. Try it in chicken tikka masala.

Both the green and black varieties are used for cooking. These sweet, slightly perfumey pods (green) are often found in desserts such as pudding. The pods are cracked to release their seeds, which are then crushed to release their oils. Black cardamom is used more judiciously. Only the seeds are cooked, often with meats, as the smoky flavor complements braised or char-grilled meat. Try them with lamb.

The dried, orange, weblike covering of the nutmeg seed, it’s delicious dropped into a curry, giving a flavor you’d know as familiar but would probably never guess. Simply chop some and add to rice a few minutes before it’s ready. Use it in pickling fruits and vegetables as well. As for the nutmeg itself, keep them whole and grate them as needed into curries and in baked goods, or to top the lassi—a sweet yogurt drink refreshing in summer with mangoes.

For curry fans, this is your spice. With its earthy flavor and aroma, these tiny seeds elevate the Madras curry blend to its proper place among royalty in the spice cabinet. You can’t eat Indian pickles without tasting this seed, too, along with its mate, the mustard seed. When you leave an Indian restaurant, often there is a bowl of seeds by the door to spoon out and chew as a digestif. The leaves of the fenugreek plant are what gives butter chicken its slightly fennel flavor.

Jeremy Pughhttps://www.saltlakemagazine.com/
Jeremy Pugh is Salt Lake magazine's Editor. He covers culture, history, the outdoors and whatever needs a look. Jeremy is also the author of the book "100 Things to Do in Salt Lake City Before You Die" and the co-author of the history, culture and urban legend guidebook "Secret Salt Lake."
Previous article
It’s Not Too Late to See Stunning Perseid Meteor Shower
Next article
Utah Arts Festival Is Back in Action