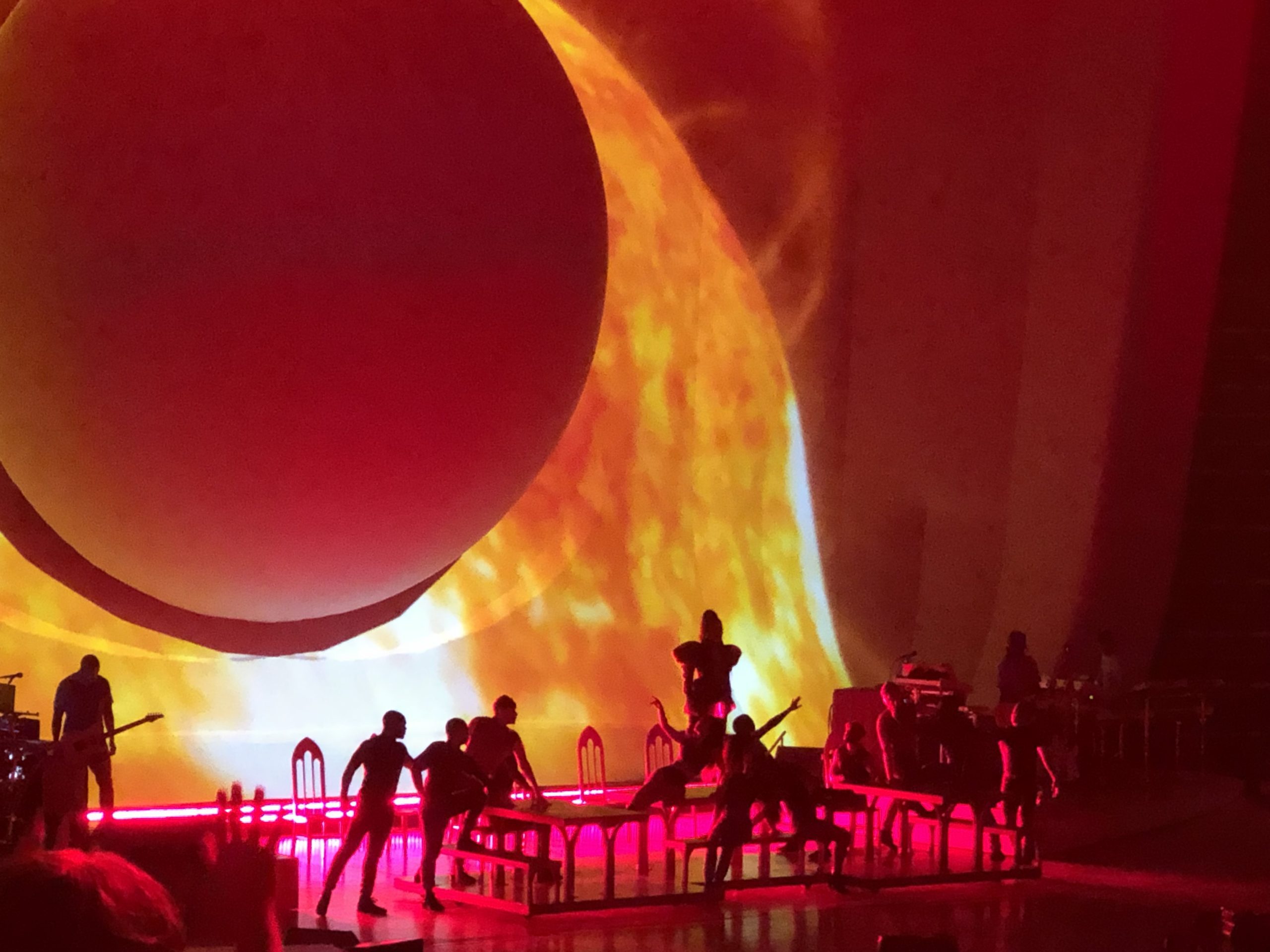 Outside Vivint Smart Home Arena, the massive crowd of Arianators seemed to be split into two camps: those hyperventilating from excitement, and those in a panic because they didn’t know about the show’s clear bag policy and had to figure out what to do about their purses. Hype and security were high, and understandably so: one of music’s biggest popstars and gun control activists, Ariana Grande, was headlining.

Neither the vigilance nor the rain clouds dampened the frenzy one bit, though, as opener Social House noted; “SLC, your energy is crazy!” The hip hop duo already had everyone jumping and lighting up their phones to their hit, “Magic in the Hamptons.” While still new to the scene and with a first yet album yet to drop, they are credited for writing and producing songs for Grande, as well as Meghan Trainor and Jennifer Lopez.

Normani is of course a former Fifth Harmony member, but as her intro made clear, she was an emerging soloist in her own right. Fiercely, she tossed her hair and gyrated in a nude, glittery bodysuit. Her slightly less sparkly backup dancers kept pace with her, and during interims, took front and center stage with alternating solo dance numbers. Wrapping up this show of girl power and solidarity was an all-girl band. Along with performing her own songs, “Dancing with a Stranger” and “Waves” and doing an ethereal cover of Rihanna’s “Diamonds,” she blessed fans with a surprise medley of hits from her past life, beginning with “Work from Home,” transitioning to “We Found Love,” and rounding things out with the ode to powerful women everywhere, “BO$$.”

Perhaps it was the impossibly high pumps; more likely, it was the indelible stage presence: when the petite Grande emerged from a hole in the middle of the stage to the backdrop of “raindrops (an angel cried),” the entire stadium immediately filled with high-pitched screams that left my ear drums ringing until the next morning. She and her dancers were splayed around a long, rectangular table, Last Supper-style. Appropriately, she was at the center, singing “God is a Woman.”

The almost three-hour set that followed was replete with hits mostly from her last two albums, Sweetener and thank u, next: produced and released within a year of each other following the mass shooting at her 2016 concert in Manchester, England. She has stated in interviews that the albums were written in large part to process the traumatic events of that summer. To have that knowledge in mind while watching her perform these songs for the 50th time – this was the last show of the first leg of her tour – was in itself moving. “Breathing” is one of the songs she had written for her fans in light of the shooting, and as one of her more sonically-understated songs, it got a resounding sing-along.

Grande showed all sides of her persona; playing seductive during “Bad Idea” and “Into You,” and perky during “sweetener” and “NASA.” Without her collaborators Nicki Minaj and The Weeknd, respectively, she still treated us with “Side to Side” and “Love Me Harder.” She boasted about her riches in “7 rings” with a personalized touch chilling behind her: a lowrider graffitied “Salt Lake.” Throughout, she stunned with her trademark whistling high notes. Could there have been more personalization, say, in the form of audience interaction and banter? Perhaps. But for a musician to have been doing the same act for so many nights, to simply have had her level of energy was remarkable.

The stage and light show was a feast: an orb partially protruded from the projector, while another orb eventually descended entirely from the ceiling. Depending on the song, projections of the galaxies or Grande’s dancing filled the screen, as well as the U-shaped catwalk that took up the floor of the arena. Hearkening its music video, the dancers toted umbrellas in front of a backdrop of blue skies and puffy white clouds during “No Tears Left to Cry.”

“This is our 50th show,” Grande announced, when she came back for her encore. “And this is our final show of the first leg of the tour, which is amazing. I’m so grateful.” Loud-pitched screaming followed as she thanked her band, dancers, and her openers. In a seemingly unplanned moment, she admitted through nervous laughter, “I didn’t think…I didn’t know if we would make it this far, so I thank you guys for your love and your energy. It’s truly inspired me.” With that, she wrapped up the night with “thank u, next.” Instead of emulating the song’s Mean Girls-themed video, she and her dancers sauntered around the catwalk, pride flags in hand. Confetti rained from the ceiling – and it was personalized with album art. It was a joyful way to end a show that covered so many triumphant and tumultuous moments of Grande’s past few years. When the show let out, the traffic was understandably crazy and a fan had vomited on the ground (perhaps as a residual effect from the excitement), but the skies had cleared.

See all of our music coverage here.

Charissa Chehttps://saltlakemagazine.com
Charissa Che was born and raised in NYC and has been a journalist for over 12 years in news and arts and entertainment. She is a music contributor for Salt Lake Magazine. Additionally, she holds a Ph.D. candidate in Writing & Rhetoric at the University of Utah. She prides herself on following the best cat accounts on Instagram. Calicos preferred.
Previous article
Best of the Beehive – Sugar House
Next article
Best of the Beehive – West of SLC