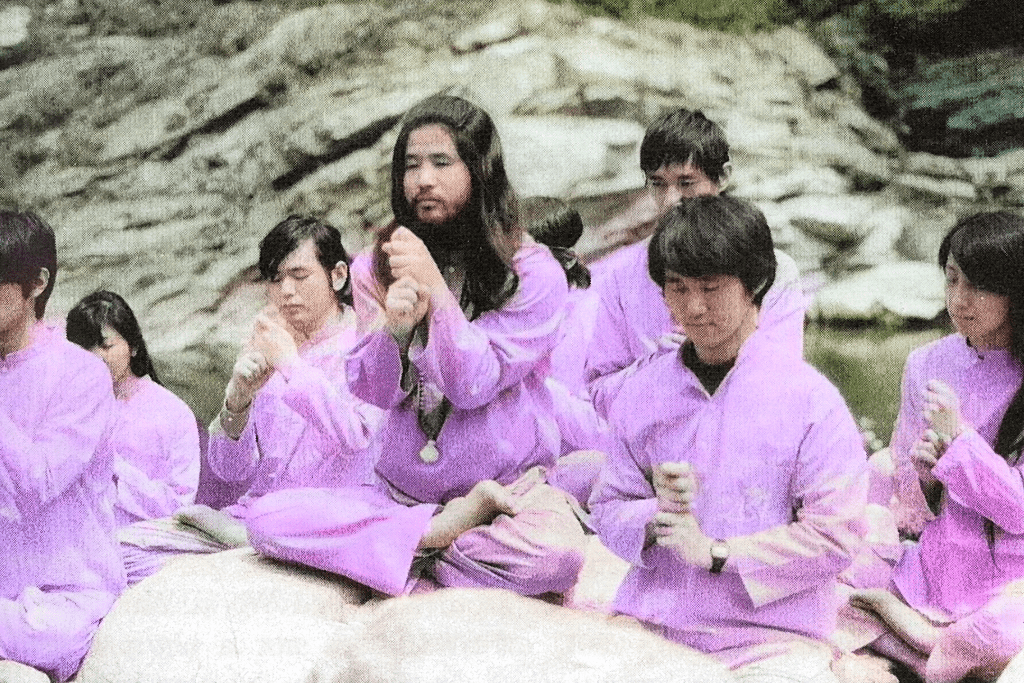 1995 was tough on Japan. Already in the midst of a “lost decade” of economic stagnation, that January the country experienced a devastating earthquake, near Kobe, that killed more than 6000 people. Then, in March, the Tokyo subway was the target of a domestic terror attack, in which members of the apocalyptic cult Aum Shinrikyo released sarin gas, a deadly nerve agent, on three train lines converging on Kasumigaseki, the seat of the national government. Though the casualties of the attack (13 killed, about 1000 injured) were a fraction of those caused by the earthquake, its psychological effects and legal ramifications had their own aftershocks. Unlike an earthquake, however, the Aum attack seems to have been entirely predictable, as shown by the new documentary AUM: The Cult at the End of the World, co-directed by Ben Braun and Chiaki Yanagimoto, and based on the book of the same name, by journalists David E. Kaplan and Andrew Marshall. Both writers contribute interviews to the film, though Marshall, a longtime resident of Tokyo, and Japanese journalist Shoko Egawa provide the most extensive commentary.

On the first day of 1995 both Marshall and Egawa were alarmed by a report that traces of sarin had been discovered in the small town of Kamikuishiki, at the base of Mount Fuji. If the event was strange, it nevertheless tracked to troubling reports both journalists had heard about Aum’s years-long presence in the town. Notoriously bad neighbors, the cult had occupied several abandoned factory buildings, which came to emit noxious fumes along with the group’s persistent chanting. It was later discovered that Aum’s so-called scientific wing was producing massive amounts of chemical weapons in these warehouses.

Through various informants, including former Aum members, their victims, and Fumihiro Joyu, the cult’s spokesperson until its breakup, Braun and Yanagimoto track the group’s history to its foundations, in the mid-1980s, when Asahara (born Chizuo Matsumoto) was leading a spiritually informed yoga practice. In 1987 he founded Aum Shinrikyo, eventually declaring himself fully enlightened, and giving himself ever grander titles as he gained substantial positive media attention. Through savvy information and marketing techniques, including manga and anime, the group had attracted 3000 followers by 1989, many of them young Japanese who, the film argues, were seeking spiritual education and fulfillment as Japan’s booming ‘80s economic success quickly cooled. They were, it’s said, deeply pessimistic about their future and had little faith in the guidance of their parents’ generation.

While the story of Aum’s rise, its crisis and denouement, including the day of the gas attack, are dramatically narrated and recreated through interviews and ample, often disturbing, contemporary video, a viewer may be left with some questions about the goals of this otherwise well-constructed documentary. A central intent, the directors told their audience at the premiere, was to inform, using a strong narrative that puts viewers in the moment of the events. The film accomplishes this quite well.

Yet, one wonders, if the subject had been someone else’s national tragedy, say, 9/11, if an American audience would welcome a similarly affect-forward recreation of the event, including amateur video, images of shock and pain and devastation. (Braun, whose elementary school sat in the shadow of the twin towers on September 11th, explained that the trauma of that event drew him to the Aum story.) Is that the documentary one would want, or one that followed questions (admittedly complex and likely never fully answerable) of responsibility, legal, moral, and cultural, a film that was even more interested in the why than the horrifying what, in more assiduously exploring the how-did-we-get-here and the how-do-we-keep-this-from-happening-again?

In AUM, substantial blame is laid at the feet of the Japanese police for not investigating the cult more aggressively in the years before the gas attack, and the media for amplifying Asahara’s fame during the same period. Yet no representatives of either institution are questioned in the film about these accusations, even as Egawa wonders if they (the media) have learned their lesson. Braun and Yanagimoto admitted that they’d interviewed investigators, but made a “creative decision” to follow, instead, the story of those who experienced the attack directly. That decision, while nicely serving the directors’ aims, seems rather cynical, ultimately, a market-oriented calculation that privileges “strong narrative” and spectacle, while coordinating poorly with the film’s wan closing gesture. Intended to argue for this almost 30-year-old story’s current relevance, Marshall is asked to make the case that Asahara’s charismatic command over his followers was similar to the influence more recent, anti-democratic politicians and their media apologists wield over their supporters.

Perhaps…and? Should we be even more worried (as AUM’s ominous electronic soundtrack rises in the background)?

Finally, while the film does provide some concise, even convincing arguments about the social ills that may have contributed to the success of Aum’s recruitment and control of young people and scientific professionals, there’s still too little interest in analysis here to really decenter the narrative of horror and get at some substantive and truly relevant considerations of the failures of Japanese culture and society, as well as those of the West with which Japan is deeply entangled.

Michael Mejiahttp://www.saltlakemagazine.com
Novelist and University of Utah professor Michael Mejia is a veteran crew member of such Hollywood classics as Carnasaur, Love, Cheat, and Steal, and The Day My Parents Ran Away.
Previous article
Slamdance 2023: New Religion
Next article
Sundance 2023 Review: ‘Animalia’