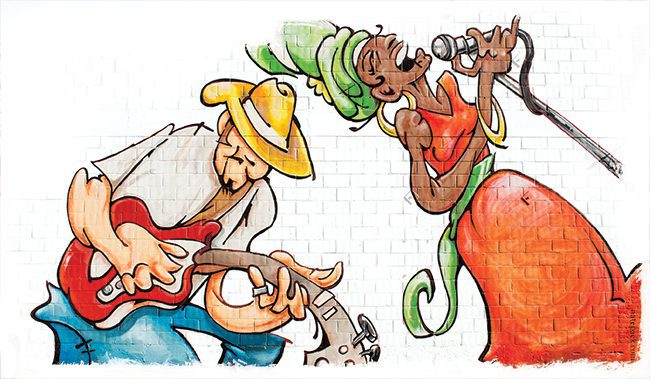 Best of the Beehive 2016: Arts and Entertainment

As part of Provo Pride’s ongoing community outreach efforts, every Friday night is gay night at City Limits Tavern, one of the only bars in town. Every other week, gay night is a drag show hosted by Provo’s own Divine Sister Misters—a group of queens from Provo— with music by Miss DJ Bad Kitty and custom drinks inspired by the performers.

There was a time that video stores were king, but now Blockbuster has gone bankrupt and digital downloads and on-demand movies rule. Except, that is, at  Salt Lake Film Society’s Tower Theater, which still has a robust video rental selection. Indies, foreign films and mainstream titles are all available to rent. Even better—Tower has a staff whose recommendations you can trust.

Utah Museum of Fine Art has closed for remodeling, but the art hasn’t stopped. Until the building re-opens next year, monthly lectures and community art projects pack the calendar, including  family-friendly third-Saturday art projects at the Sorensen Center and backpacks full of gear for kids to explore the Spiral Jetty available for check-out at the downtown City Library.

There’s a park you may have never known existed, just east of Trolley Square, tucked away next to homes in the middle of a block. Gilgal Garden—the brainchild of a religious zealot who worked as a stonecutter—features a dozen fascinating sculptures, including stacks of giant books, a stone archway, a self-sculpture of the artist in plaid (brick) pants, a sphinx with the head of Mormon founder Joseph Smith and 70 engraved stones. Take our word for it: It’s easier to see than explain.

Whether you watched Carl Sagan’s Cosmos, or the later Neil DeGrasse Tyson version, admit it, you’re kind of into space. The Salt Lake Astronomical Society can help you foster that interest with its Star Parties. They’ll lend you a telescope and patiently explain what you’re looking at. Some star parties are open to the public, but membership to the society has privileges, like private parties, organized trips to national parks to look to the heavens and learning how to build your own telescope. slas.us

King’s English, the Salt Lake bookstore that looks and feels like it belongs in a Nora Ephron-penned romantic comedy, has been a local favorite and alternative to big box stores for years. Their book signings, with lines that snake out the door and into the 15th and 15th neighborhood, feature authors both locally and internationally known.

Everyone knows about Geeks Who Drink and their weekly trivia nights at your favorite bar, but there’s a lesser-known trivia outfit in town. On the third Thursday of each month The Leonardo plays host with trivia questions curated by City Library employees — science, pop culture, current events, art history and a mystery subject test competitors’ smarts.

The Musicians of the Utah Symphony After Dark leave their day job at Abravanel Hall to bring classical music to the masses by booking shows at local bars and restaurants, resulting in a front row symphonic experience—completely breaking down the fourth wall and making the music, and the musicians, approachable.

The Avenues Community Choir was started in 2014 by residents who wanted to bring the east bench community together. They started by recruiting in the community newsletter, at the Avenues Street Fair and other neighborhood events. Now the members perform an annual concert at Libby Gardner Hall on the campus of the U. of U., to a standing-room-only crowd. This year’s concert will be held on December 20.

Club Jam in Salt Lake’s Marmalade District, takes on Mormonism at the weekly Sunday church-themed karaoke and the bi-annual General Conference-themed party.  Featuring missionary costumes and scantily clad men spray painted gold to look like the angel Moroni, there’s little doubt that these partiers are not of the state’s largest religion, and not just because they’re at a gay bar.

First a fire nearly burned the The Garage On Beck down. Then formerly benign neighbor Tesoro Refinery decided it would evict the road house out by buying the land. The bar’s landlord politely replied, “Hell no!” Annoyed, Tesoro took away much of the land the bar uses for parking. That only triggered an upswell of community support and creative parking. Worry not: Those delicious deep-fried funeral potatoes aren’t going anywhere soon.

If you’re unfamiliar with Haworth’s work, you’re probably living under a patio stone in South Jordan. Seriously, you’ve got to get out more. Besides her works in museums around the world, including the Utah Museum of Fine Arts, any local slob can see her mural “SLC Pepper” any time on the wall opposite The Rose Establishment coffee shop on 400 West.

SLC Pepper is, of course, a localized riff on the The Beatles’ Sgt. Pepper’s Lonely Hearts Club Band album cover that Haworth helped create back in the olden days of rock. Unlike Paul McCartney, however, Haworth remains relevant—earlier this year, she exhibited at the renowned Art Paris: Art Fair in the Grand Palais. Not bad for a SLC tagger.

Yet, Haworth commits most of her time as an educator and mentor to fellow artists and kids at The Leonardo museum. She recently received the Mayor’s Artist Achievement Award and a key to the city for her achievements, which seems way too little—especially after Haworth learned the key doesn’t fit any locks.