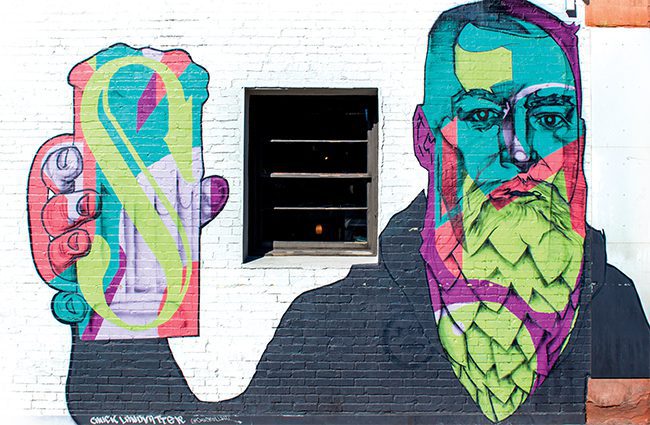 Best of the Beehive 2016: Food and Dining

Those whose tastebuds have been accustomed to Canada Dry will be flabbergasted by the jump from bland to bold when they first sip Garwood’s Ginger Beer. The fireworks in your mouth come from a small-batch blending of fresh citrus and organic ginger, sweetened with organic cane sugar and crafted by Thomas Garwood right here in the city of Salt.

Ever walk into a Vietnamese restaurant and have a hard time deciding between banh mi (pronounced buhn•mee, not bon•mee, by the way) or pho? Well, at Oh Mai, the S12 brisket banh mi is basically pho in sandwich form. To get a Vietnamese French-dip-esque experience, order the optional side of pho broth for dipping.

Put on your walking shoes, take the Frontrunner up to Union Station and spend the day noshing and sipping along Historic 25th Street. Pig & a Jelly Jar, Rooster’s Brewing Co., Rovali’s Ristorante Italiano, Shin Sei, Tona Sushi, Zucca Trattoria, Thai Curry Kitchen, Hearth and too many others to mention, plus you can take a short detour over to Sonora Grill, one of the best Mexican kitchens in the state. Waddle back to the station or give it up and book a room—that way, you can finish your food tour in the morning.

Go to visitogden.com for more information.

Best Place for a Wings Spread

R&R BBQ has quickly become the premier place in Salt Lake to get southern-style barbecue. The menu is filled with smoked staples such as ribs, briskets and pulled pork. But they also have chicken wings, which are smoked then fried. The two-part process is what makes these wings so wonderful.

Naked Fish serves great ramen, but until recently, it was only available during lunchtime. Those in the know can now have the unctuous, silky soup bowl for Sunday supper. And it’s about time they made it available beyond the lunch hour. The ramen at Naked Fish is garnished with nearly 10 toppings, which certainly add up to a proper dinner.

Few foods are discussed as heatedly as chili. Beans or no beans, tomatoes or no tomatoes, pork or beef. Turkey? Maybe. Tofu? Never. There’s no arguing about the chili at East Liberty Taphouse—a thick stew of deep-flavored elk meat, seasoned and colored by brick-red chili powder so it’s aromatic, complexly flavored and just spicy enough to keep things interesting. Comes with housemade “fritos” and should  be ordered with an ice-cold beer. You can make that happen.

You order a glass of house wine because it’s usually the cheapest on the list. And, you get what you pay for, right? But Fred Moessinger and Aimee Sterling, owners of BTG Wine Bar and adjoining Caffe Molise, set out to redefine house wine. With the help of Francis Fecteau of Libation Inc., they traveled to Sonoma and collaborated with celebrated winemaker and palate Morgan Twain-Peterson of Bedrock Wines (San Francisco Chronicle’s Winemaker of the Year and son of Joel Peterson, one of Sonoma’s Zinfandel pioneers) on blending their house wine. The result, Caffe Molise Rosso, is one of the best wines on the menu.

Last year, rumors were everywhere about the “updates” coming to Shallow Shaft in Alta—new owners were planning to revamp the rustic dining room, re-do the ski boot-friendly stairs, renovate and add a little chic and shine to the old lodge feel. We’re pleased to report that nothing happened.

HSL stands for Handle Salt Lake. It’s Briar Handly’s restaurant in the erstwhile Vinto space. Vinto is now only open in Park City. In other words, though we loved Vinto, our neighbors up the hill got the short end of that stick. Chef Briar is one of the recognized kitchen talents in this state—two-time James Beard finalist, one of the Best Chefs in America, winner of all kinds of cooking competitions and awards—and his latest venture, a spin-off of Handle in Park City, is poised to be one of the best restaurants in Salt Lake City.

Downtown has a buzzing bar scene these days thanks to the cocktail corridor — between 200 and 300 South where Bar X, Copper Common and Under Current are all within walking distance. But for those who would rather have a reprieve from the downtown crowd, there’s The Ruin in Sugar House.

Restaurateurs work hard and consider themselves lucky if they get one day off out of seven. On Randall Curtis’ day off, he’s still in the kitchen, but not cooking for the customers at his restaurant, Harbor Seafood & Steak. On Monday nights, Curtis delivers dinner to homeless women at The Road Home. “I try to have enough food for 200 women,” he says. “And I usually serve around 150, but some come in and eat after I leave.”

After doing this for a year and finding it rewarding—“It’s changed my whole outlook,” he says—Curtis invited other restaurants to join him. Ali Sabbeh of Mazza and Matt Caputo of Caputo’s Market & Deli donated dinners, and recently Curtis filed for a 501c3 called Stone Soup, “a charity made for the restaurant industry and people who work in restaurants.”

Salt Lake Magazine
Previous article
Best of the Beehive 2016: Wasatch Faults
Next article
A World Without the Trib