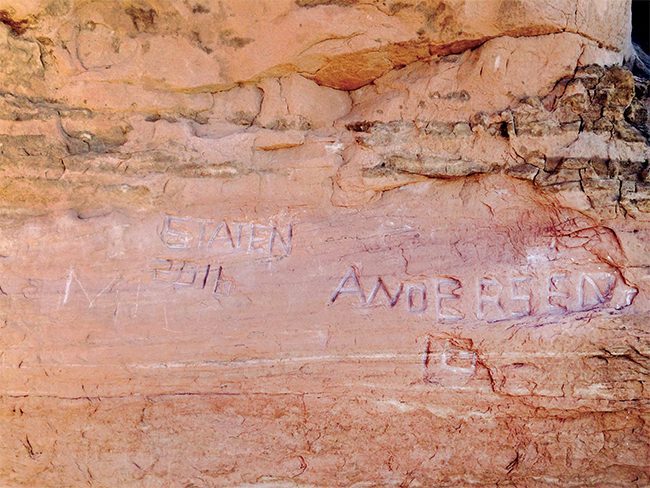 Best of the Beehive 2016: Wasatch Faults

Arches N.P.’s iconic Delicate Arch has seen better eons, thanks to knuckleheads who carved six-foot-tall words into its sandstone so deep that park officials doubt they can restore it. Rangers are sharing the images of a recent “tidal wave of graffiti” on social media in an effort to shame and punish vandals. If you see vandalism, call the rangers! 435-719-2100.

Spokeswoman Maria O’Mara acknowledged that the U of U gave an honary degree to a woman who was a leader in groups whose anti-LGBTQ campaigns around the world “does not reflect the values” of the U. How could that possibly happen? “Those organizations were removed from an online biography because they were not part of the honorary degree committee’s deliberations.”

Worst Response to the Zika Virus

Just when we thought anything would be better than watching the Trib waste away after being sold down the river by its absentee owners in a renegotiation with the Deseret News, word comes that Paul Huntsman will buy the paper. Having devout Mormons (even more devout businessmen) run the Trib might mean survival, but at what cost?

Most Devious Attempt to Pollute

As coal use declines in the U.S., Utah coal barons came up with a plan to divert coal-field restoration money into a port in Oakland, California, that would ship Utah coal to China. Unfortunately, even China is cutting coal use. Maybe the Legislature should follow China’s lead and invest the dough in solar- and wind-power equipment manufacturing.

Dems young and old stood hours in a snow squall to vote in the primary caucuses (overwhelmingly for Bernie)—most for the first time. Lessons: 1. People do care about their vote. 2. The powers that be don’t care about peoples’ votes. 3. Who’da thought Utah has a boat-load of progressives?

Most Darling Example of Political Innocence

At the Avenues caucuses, Salt Lake magazine witnessed one excited first-time Democratic voter put himself forward to lead his caucus at the county level—then voted for his opponent because he believed, somehow, it would be uncool to vote for himself. He lost.

How Rumor Sausage is Made

A rumor swept the foodie community that irascible artisan butcher Frody Volgger had passed over the River Jordan (the metaphorical one, not our westside ditch). But when fans showed up at Salt & Smoke with plans to convert the well-aged carcass into salumi for the wake—they met Frody himself in his apron, armed with a summer sausage, shouting “I’m not dead!” His resurrection was reluctantly accepted.

Salt Lake Magazine
Previous article
Best of The Beehive: Giveaway One
Next article
Grown in Utah