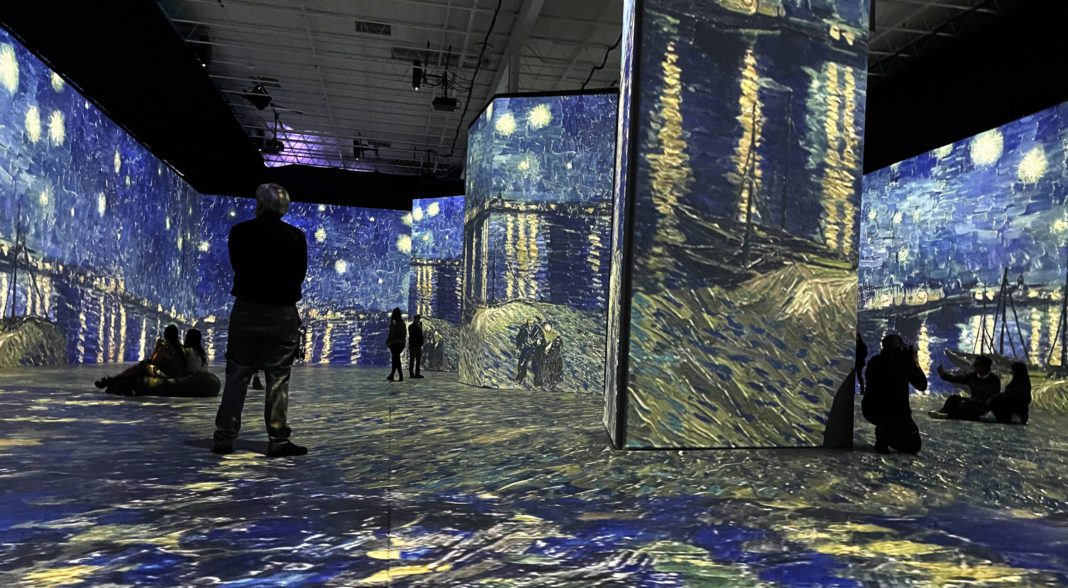 Beyond Van Gogh defies the definition of a typical museum exhibit. While not directly interactive, it is immersive and captivating. After traveling the country for months, the exhibit has arrived in Salt Lake City this week at Atmosphere Studios.

Don’t let the warehouse-like exterior and unassuming lobby deter you—the Beyond Van Gogh exhibit delivers on its promises. The self-guided tour begins with a mirrored and neon-lit entryway, illuminated with one of Vincent Van Gogh’s more famous lines setting the tone: “I dream my painting and I paint my dream.” Indeed, there is a dreamlike quality to the experience.

The hallway takes guests to a gallery with lit panels of text and empty golden frames suspended from the ceiling. It’s the most traditional museum-like portion of the exhibit. The panels and frames guide guests through a zig-zag pathway and narration of Van Gogh’s life, punctuated by quotes from the artist, pulled from his letters to his brother and friends.

One of the final panels gives gratitude to Van Gogh’s younger brother Theo, who was a near constant source of love and support for Vincent, and credits him with much of the later renown Vincent and his work received. The exhibit should also mention the person who proliferated Van Gogh’s work after both brothers had died, leaving her a single mother with an apartment full of paintings: ​​Jo van Gogh-Bonger, Theo’s widow. She’s since become “The Woman Who Made Vincent Van Gogh.”

The true heart of the Van Gogh exhibit is a large room with a row of pillars at its center. Every surface, from the walls, pillars and floor, is a moving canvas. Soft orchestral music accompanies the animation with near seamless transition from artwork to artwork. A woman’s voice reads lines from the artist’s correspondence, selected with purpose. Splashed across one of Van Gogh’s dreamy nightscapes (“Starry Night Over The Rhone”), golden letters blaze, “It often seems to me that the night is much more alive and richly colored than the day.”

Such is the detail of the projections that one can see depth in the brush strokes, as if you could reach out and feel the texture of the paint. One of the most stunning moments of the display arrives with quotes about the love between the brothers, as branches of Van Gogh’s “Almond Blossom” form on the walls and flowers bloom one by one. At the culmination of the painting, white petals rain down, gliding gently across every surface of the room.

The exhibit features over 300 of Van Gogh’s most iconic masterpieces, including “The Starry Night”, “Sunflowers” and “Café Terrace at Night.” You’re meant to linger, standing, or lounged back in one of the provided bean bag chairs. Guests snapped endless photos and seemed, overall, transfixed by the moving representation of Van Gogh’s work, but one attendee, unimpressed, compared it to a Windows screensaver.

Co-creator of the exhibit Mathieu St-Arnaud said Beyond Van Gogh allows people to “step inside the paintings to meet Vincent.” If you would like to “meet Vincent,” the exhibit is open Sunday 10 a.m.-8 p.m., closed Monday and Tuesday, and open Wednesday-Saturday 10 a.m.-9 p.m., at Atmosphere Studios (326 W. 700 South, SLC). Tickets are available on the Beyond Van Gogh website and will cost you about $35 each.

Christie Porterhttps://christieporter.com/
Christie Porter is the managing editor of Salt Lake Magazine. She has worked as a journalist for nearly a decade, writing about everything under the sun, but she really loves writing about nerdy things and the weird stuff. She recently published her first comic book short this year.
Previous article
Utah Pride Center Celebrates National Coming Out Day With Road Rally
Next article
Review: ‘Four Women Talking About the Man Under the Sheet’ at Salt Lake Acting Company