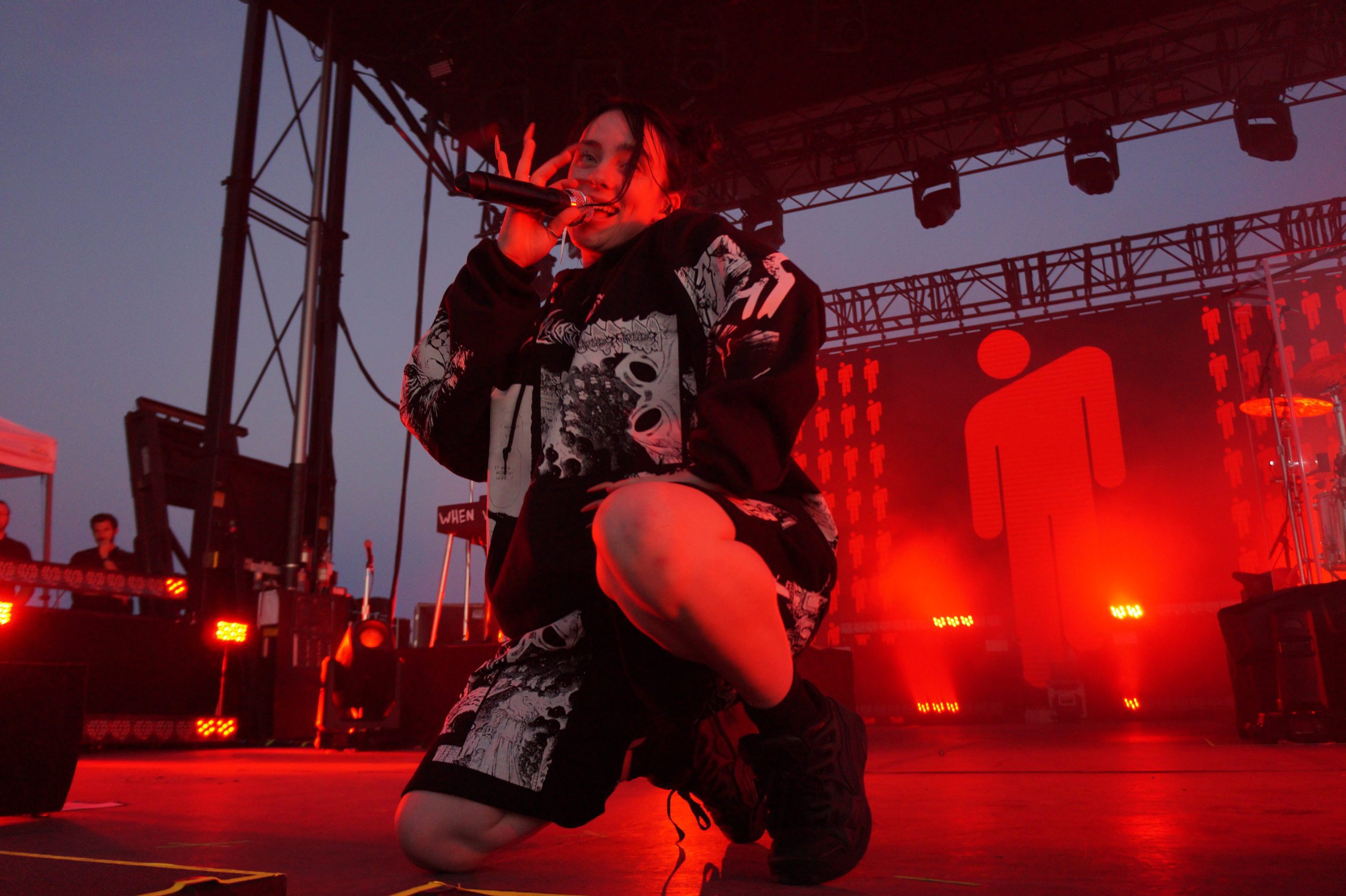 Y’all have lungs!” An exasperated Billie Eilish reminded us. “F*ck!” Her set had just started at the Saltair, yet both the heat and hype were so high that the largely teen audience was already going unconscious. During opener Denzel Curry’s appearance, at least three people had passed out and were pulled out from the barricade. To stave off future fainters, a plentitude of security personnel in neon yellow shirts chucked water bottles into the throng, and intermittently hosed them down. Elsewhere, more security was stationed along the stairs, eyeing out potential victims. Eilish was successfully able to get everyone to take a few breaths, and a few steps back.

The chaos was unprecedented, even for a show at the Saltair – and understandably so. At only 17 years old, Eilish has been selling out shows at every step of her world tour, to the point that organizers had to switch from their original venues to larger ones in order to fit the overwhelming demand. The Saltair was among these venues (it was originally slated for the Complex).

After a not-too-long break after Curry, some black and white Takashi Murakami-inspired figures started flickering onscreen. A little girl is helplessly lost in a dark cemetery while gnashing fangs approach and spiders swarm. Finneas O’Connell, Eilish’s brother, producer, and a musician in his own right, came out first; then the drummer; then, like a cannonball, Eilish. “bad guy,” one of her biggest hits, was her leading song – a seductive, synthy, and when played live, super dancy number in which she establishes her reckless prowess (i.e. she’s the “might-seduce-your-dad type”).

The murmurs about her stage presence are absolutely accurate: she is indisputably a shot of caffeinated youth: angsty, thoughtful, sad, and optimistic from one moment to the next. At times, she stood on the speakers and kicked angrily at the air; at others, she kneeled at the edge of the stage, pensive, only to wind up and start zipping around again. And whether it was during the letter to a lover who had rejected her (“wish you were gay”), a diss to a fellow artist who “copped her manner” (“copycat”), or the painfully heart-on-your-sleeve message to a love interest gone astray (“i love you”), her devoted fans were fully along for the ride. All around, there were people rocking pigtail buns, dyed indigo hair, and merch featuring her blohsh logo.

The pairing of Curry and Eilish may have seemed a bit incoherent, seeing as one was a rapper that dabbled in experimental, jazz-infused hip hop, and the other was a pop artist whose fan base was largely teenage girls, but as it turns out, the reason they were touring together was actually rather sentimental.

“Three years ago, I stood in the blazing sun, in the dirt, to see Denzel,” Eilish told us near the end of her set. “And, you know, three years later, this is where I’m at, and he’s on this tour with me. And that’s f*cking crazy. Basically, I just wanna say it’s completely surreal to me that I was such a fan of his, and I’m still a fan of his, but now it’s like…I don’t know…anyway.” She tapers off; goes silent for a bit. Endearingly, she looks back up and adds, “Thank you to Denzel; he’s fire.”

The more produced and upbeat songs naturally stood out more than the slower ones – see, mostly: “you should see me in a crown” and closer, “bury a friend”; Eilish somehow managed to sound just as good live as she does in her recordings, all while bopping around the stage. The only exception was “Ocean Eyes,” the lush, soaring love song that placed her on the map some three years ago.

It’s rare to see an act that connects so deeply with her fans. Perhaps it’s because they’re about the same age, share the same lingo (that someone is “fire”), and the same challenges of their generation. At one point, she got everyone to turn on their phones’ flashlights and wave them to a slow song. A few songs later, and in one awe-inspiring moment, it went dark after she tells everyone to try to live in the moment and put away their phones. This was the kind of influence a professor could not enforce, not nearly as effectively.

Suffice it to say that it will be exciting not only to see where Eilish’s career goes, but also to see her and her fans “grow up” together over time.

To see more photos from the show (including shots of an impromptu meet and greet from Curry), go here.

Charissa Chehttps://saltlakemagazine.com
Charissa Che was born and raised in NYC and has been a journalist for over 12 years in news and arts and entertainment. She is a music contributor for Salt Lake Magazine. Additionally, she holds a Ph.D. candidate in Writing & Rhetoric at the University of Utah. She prides herself on following the best cat accounts on Instagram. Calicos preferred.
Previous article
Kiss My Shrimp & Grits – Hearth & Hill
Next article
How to Play Summer Concert Bingo