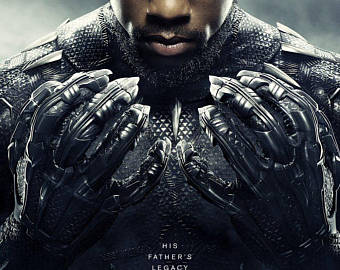 Black Panther: A perfectly timed discussion in the age of Trump

After hearing for years that their movies are formulaic and punctuated with endless one-liners to hide weak villains chasing the same Infinity MacGuffins, Marvel responded by changing the game: “Ant-Man” became a heist film; “Thor: Ragnarok,” a cosmic buddy comedy; and now “Black Panther” is a politically loaded social commentary while introducing new characters, a fictional country, and the best villain this side of Loki.

Additionally, it expands on a comic book character introduced in 1966, but who only debuted in the Marvel Cinematic Universe in 2016. Super hero Black Panther is named T’Challa (Chadwick Boseman), who now rules over the African nation of Wakanda as King since his father’s death in “Captain America: Civil War.” But T’Challa faces a civil war of his own when outsider Erik Killmonger (Michael B. Jordan) challenges him for the throne.

And what a throne. Rich in culture and prosperous from futuristic wizardry fueled by Vibranium — an alien metal deposited there by way of an ancient meteorite — Wakanda is also the world’s best kept secret; literally hidden behind a hi-tech cloak of invisibility, the ultimate in isolationism.

But Killmonger not only has a very personal score to settle, having also been left to fend for himself in America, he’s experienced firsthand the treatment people of his color face every day; surely Wakanda could capitalize on their hi-tech weaponry to command a global influence. If such outreach comes with a touch of genocide, so be it — it’s not like the world doesn’t deserve it.

But “Black Panther” forgets to be an entertaining super-hero flick while broaching racism, nationalism, and tribalism, to mention only a few of the -isms in its 140 minutes. It’s potent but also pretty dense; heavy on exposition and character development, and light on much of the expected whiz-bang action sequences and thrills of the genre.

But to make such a grand statement, ya gotta break some barriers, and the film’s largely black cast certainly does that, with their performances being the best part of a film loaded with great parts: from the score to the costumes, from the effects to the dialogue, largely void of one-liners… to say nothing of seeing an African country unspoiled by the evils of colonialism.

Although not a perfect film or typical super-hero flick, “Black Panther” certainly changes the game once again.

Richard Bonaducehttp://www.saltlakemagazine.com
Rich Bonaduce was born and raised in Pennsylvania but has lived in Utah now for half his life. In addition to being a regular contributor as a Film Critic for Salt Lake Magazine, he is also the Film Critic and Entertainment reporter for FOX13’s weekly morning show Good Day Utah. He’s also a drummer in local band “Mojave Rose,” and is much shorter than he appears on television. You've been warned.
Previous article
2018 Dining Awards: Salt Lake magazine names Best Restaurants in Utah
Next article
Theater Review: i at PTC