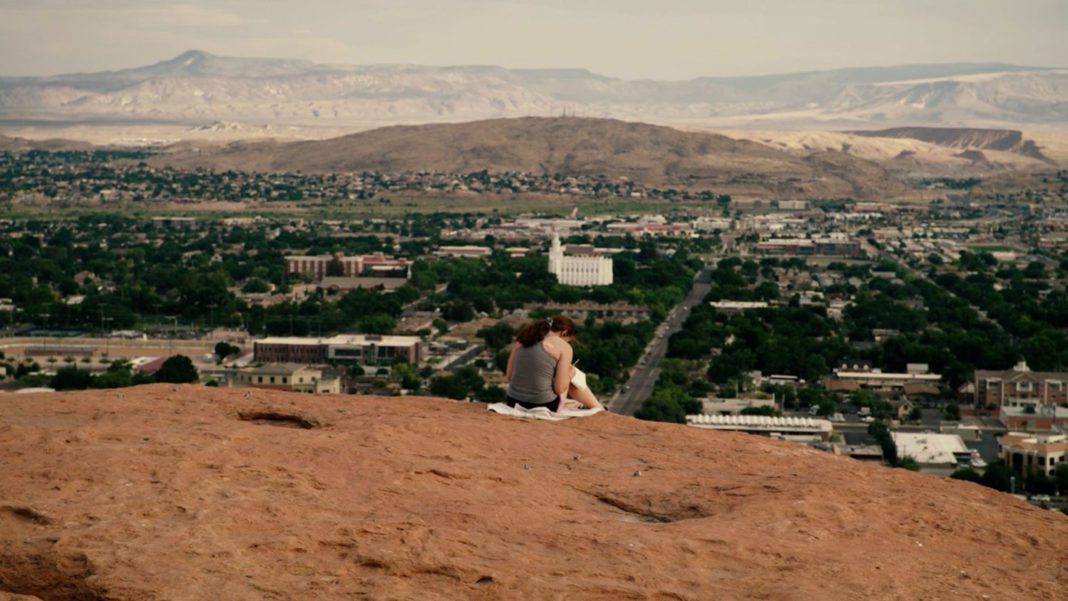 The documentary Chewed Gum, which explores the culture of silence around sexual and domestic violence in Utah communities, is in post-production after winning the DocPitch 2022 Audience Award and a $45,000 grant. Now, the filmmakers are hoping for more audience support to complete the film.

Maiello was not a member of The Church of Jesus Christ of Latter-day Saints when she decided to attend Brigham Young University in Provo. She had dreamed of playing golf in college and BYU recruited her. “My first semester at BYU something happened that changed everything for me,” she says. Maiello was raped at a party. Because Maiello was drinking alcohol at the party, which is against BYU’s strict Honor Code, she decided to keep the rape a secret.

“I had heard stories of other girls reporting their rapes, getting sent to the Honor Code Office and getting expelled,” she says. “I didn’t want to lose my place at BYU on the golf team, so I didn’t report.”

Suffering from PTSD, Maiello says she stopped sleeping and her participation in golf declined. So when LDS missionaries came to her door about a year later, she was ready to hear them out. “They promised me that if I was baptized I could be healed from anything. I decided to join the Mormon church,” says Maiello. She stayed in the LDS Church for more than seven years and served a mission in the Philippines.

Eventually, Maiello realized she had never actually confronted the rape or the surrounding trauma. She decided to start over, leaving the church and leaving Utah. That might have been the end of the story had Maiello not come across an article in the New York Times exposing that women who had reported their rapes to BYU had been expelled by the Honor Code Office.

“When I saw this article, it was the first time that I saw evidence, in print, of how many more women there were besides me,” she says. “I knew at that moment that I needed to tell the story.” Maiello returned to Utah and started making Chewed Gum. Since then, she has met with many victims of sexual violence from BYU and the Church. “There is a hidden community of Mormon survivors,” she says.

Chewed Gum is meant to expose a religious culture that “systematically threatens the safety and well-being of women,” says Maiello, and silences survivors of sexual violence. “I feel a deep responsibility to tell these survivors’ stories with accuracy without waging a war on the church or becoming reactive,” Maiello says.

‘A buried epidemic of sexual violence in Utah’

Rape is the only violent crime in Utah that is higher than the national average, according to data from the Utah Department of Health and Federal Bureau of Investigation. In Utah, nearly one in three women will experience some form of sexual violence during their lives. More than three-fourths (78.7%) of all sexual assault victims in Utah reported being sexually assaulted before they turned 18, and more than one-third (34.9%) of these survivors said they were assaulted before their 10th birthday.

Among the risk factors that can cause a community to have higher rates of sexual violence, the Health Department included “adherence to traditional gender norms” and a lack of “gender equity.”

“We feel that it’s really important to understand the context of this problem. Women’s experiences in Utah in general—like lack of equal pay—it’s all related and contributing to these problems,” Maiello says.

Those numbers could be higher still, as cases of sexual assault are underreported. In 2016, only an estimated 23% of rape or sexual assault were reported to police. Some sources suggest the reporting rate of child sexual abuse cases is even lower than that.

‘A culture of silence’

“When we released the trailer, we didn’t know how much it was going to resonate with people,” Maiello says. While not every survivor’s story is the same, as more people reached out to her, Maiello says the patterns started to emerge. “There were so many other women,” she says. “And this culture of silence was so embedded. Many survivors reached out to me because they hadn’t been sure if what they experienced was rape until then. They had needed someone to articulate what they were experiencing. That was overwhelming.”

One of the most common things that Maiello heard from the survivors, many of them members of The Church of Jesus Christ of Latter-day Saints, was that most of them had gone directly to the bishops of their LDS wards and didn’t report the assault to police. “You learn from the time you’re very young that your bishop is like the father to the ward—a person you deeply trust,” Maiello says. “And they [survivors] had experiences of their bishops asking them to repent.”

“I think one of the things that differentiates this film from others is the extremity at which the survivors are experiencing secondary trauma, not just the initial trauma of the assault,” says producer Liz Yale Marsh. “They are further plunged into trauma because of the response from religious leaders. That’s the crux of this film.”

Maiello says she learned from discussions with mental health researchers and survivors that, when a survivor tells someone about their assault and receives a negative reaction, it can take upwards of a decade before the survivor feels safe to discuss the assault again. “It can take that long to come to terms with being assaulted. That 10-12 year reporting gap fuels the high rate of domestic violence and assault,” says Maiello.

Dr. Amber Choruby-Whiteley at the University of Utah published research about sexual assault in the LDS faith and is interviewed for the documentary. The research asked, “What are the gendered messages of femininity that Latter-day Saint childhood sexual abuse survivors have received, and how have these messages impacted their healing from sexual abuse?” Some of those messages that impacted study participants and encouraged victim-blaming included: “a woman’s value is connected to her virginity,” “women are responsible for men’s sexual desires,” “women of color are not believed to be victims,” “sexual sin is next to murder” and “if you feel guilty, you need to repent.”

Choruby-Whiteley notes that participants’ interactions with church leaders varied in levels of support and suggests bishops and other church leaders should receive training to adequately respond to trauma survivors in their congregation. “These individuals, while often well-intentioned, are left to rely on their own personal perspectives on trauma and are likely informed by larger societal systems of victim-blaming and rape myths,” she says.

“If the leaders of the LDS Church could hear and listen to these stories, I would hope it would lead them to create comprehensive training for bishops,” Maiello says. “Without education on sexual violence and trauma, how can they advise a woman who is experiencing that?”

“Consent education is a really big piece of this,” Marsh says. “With the lack of anything other than abstinence-only messaging, survivors don’t have the language to understand they have been assaulted.”

Advocates for survivors of child sexual abuse have pointed to an LDS Church policy of bishops reporting cases of abuse to a “help line” rather than to police as perpetuating a culture of silence and complicity toward abuse, which the Associated Press covered extensively in a recent bombshell report, and suggest the policy needs to be reevaluated and revised.

For some, the phrase “chewed gum” evokes the story told by Elizabeth Smart at a panel at John Hopkins University in 2013. Smart, who was abducted from her Salt Lake City home in 2002 and held captive for nine months, said one of the factors that deterred her from escaping was that she felt worthless after being raped, in part due to the lessons she had received about sexual purity. “I had a teacher who was talking about abstinence,” Smart told the panel. “And she said, ‘Imagine you’re a stick of gum. When you engage in sex, that’s like getting chewed. And if you do that lots of times, you’re going to become an old piece of gum, and who is going to want you after that?’ Well, that’s terrible. No one should ever say that. But for me, I thought, ‘I’m that chewed-up piece of gum.’ Nobody re-chews a piece of gum. You throw it away. And that’s how easy it is to feel you no longer have worth. Your life no longer has value.”

For others, the “chewed gum” metaphor was already familiar from  their childhood in The Church of Jesus Christ of Latter-day Saints. “In many of the lessons given to young men and young women, it’s used to explain the law of chastity [the church’s doctrine on sexual purity],” says Maiello. “Hundreds of survivors have reached out saying they had received that lesson. They had absorbed it into their identity, so when they were assaulted, they asked themselves, ‘Am I chewed gum? Is this my fault?’”

Participants in Dr. Amber Choruby-Whiteley’s study shared similar object lessons they received in church, such as “a licked cupcake” or “plucked rose.” Choruby-Whiteley identifies such lessons as another area the LDS Church could improve. “The church utilizes lesson plan manuals…Current messages within these manuals about virginity and the law of chastity can create a culture of victim-blaming.” Instead, the study suggests that the church edit lesson manuals “to contain explicit instructions to teachers to permanently discontinue object lessons regarding virginity,” and that any lessons on chastity should include messaging about “what abuse is, how abuse is never the survivor’s fault, and how there is no need to repent for being a victim of abuse.”

Choruby-Whiteley also acknowledges that the LDS Church has put forth efforts to become more “trauma-informed,” including launching a website for survivors of abuse and their family, friends and church leaders.

Chewed Gum is currently in post-production, and Marsh says producers are “still actively fundraising” and pursuing grants to complete the film. “DocPitch helped us to move the film forward, but a lot of our ability to finish the film depends on fundraising, too.”

They hope to be able to start submitting Chewed Gum to premiere at film festivals at the end of 2023.

“We want the doc to be a resource,” Maiello says. “To say, ‘We don’t want this to continue. There can be a reformation. A better way.’ If I could be so bold, the church needs a reformation in the way it treats and supports women.”

“We’re in a moment where, nationally, we’re having conversations about conservative patriarchal religions,” Marsh says. “Utah is a microcosm of what happens to women in a conservative religious patriarchy. It’s important, now more than ever, for these stories to be heard.”

To learn more about the Chewed Gum documentary and donate to the film’s fundraising efforts, visit chewedgumdocumentary.com.

For more of Salt Lake magazine’s coverage on local documentary films, check out our film section or subscribe to receive the latest print issue of the magazine delivered to your home.

Christie Porterhttps://christieporter.com/
Christie Porter is the managing editor of Salt Lake Magazine. She has worked as a journalist for nearly a decade, writing about everything under the sun, but she really loves writing about nerdy things and the weird stuff. She recently published her first comic book short this year.
Previous article
Make Spirited Floats at Home
Next article
The Black Crowes Celebrate Their Debut Album at Red Butte Garden