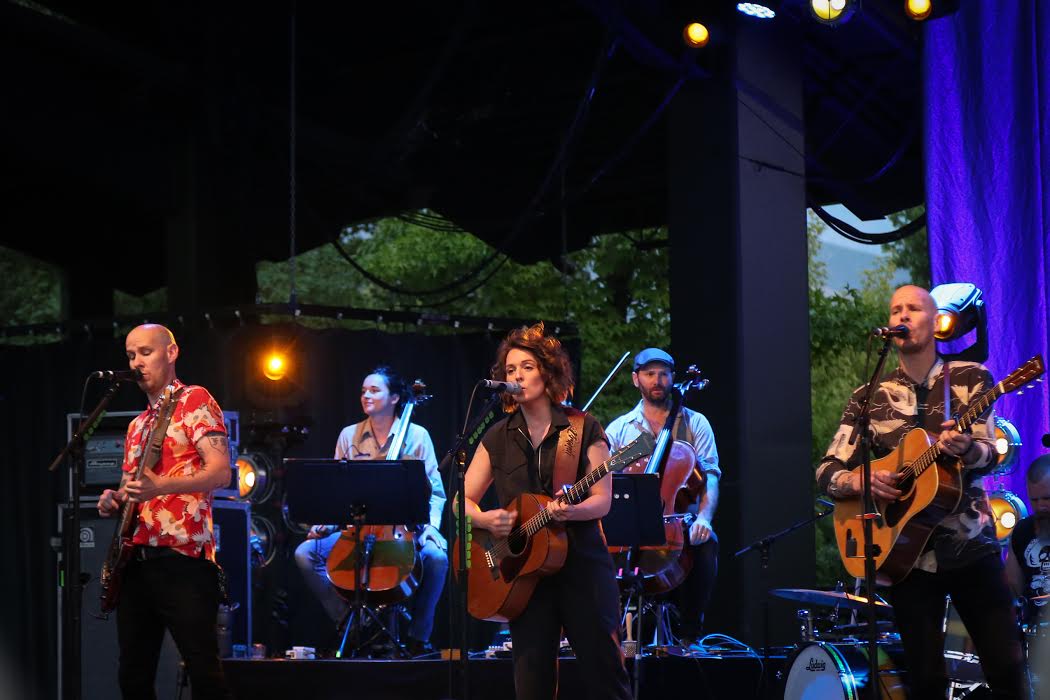 The parking lot fills with Jeeps and Subarus… and people started to crack open their Costco vats of hummus. Goddess, queer hero, cult leader… Brandi Carlile is at Red Butte, and thank goodness. When she skipped Salt Lake last year many felt betrayed.

I think to myself, “Maybe this is not the concert to go to as a queer women nursing a recent broken heart” But here I am. And how have I not run into more of my former lovers and ex-girlfriends here? I mean this is THE bat call to all lesbians in Salt Lake City. But all I could see were people of all genders and orientations, makes and models, living their best life and full of pure happiness to see their standard bearer, Brandi Carlile.

She opened with “Everytime I Hear That Song”, from her new album By The Way, I Forgive You.

She charmed the audience, who she knows are her faithful disciples. She told us, “There’s only one place you can go after Red Rock that doesn’t feel like a disappointment—Salt Lake City!”

Carlile talked about her wife and their two daughters like we were all friends gathered around a dinner table. “I think it’s really important to stand up in Utah and talk about my family and our right to exist,” she told the crowd. As a queer mom, I teared up. “If people could understand that there are types of parents…gay moms and gay dads, trans parents, straight parents….”

The Grammy-nominated Secret Sisters opened and Brandi produced their last album. She brought them on stage for “Sugar Tooth.”

Since this was my first time seeing her, I decided to seek input from her self-proclaimed Number One Fan, Greg Shearer who has seen her 10 times. “She never lets me down. I don’t listen to her albums as much. I just wait to see her live to soak in the passion,” he said.

In a surprise move by Carlile, singer-songwriter Katie Herzig joined her onstage and the crowd went wild. “Wish You Well” seemed to be an audience favorite. Whether you are gay, straight, transgender or otherwise…we all come together in the magic that is Brandi Carlile. She is the mother of Evangeline.

—Review and photo by Cat Palmer
See all of our music coverage here.

Salt Lake Magazinehttps://www.saltlakemagazine.com/
Salt Lake is your best guide to the Utah lifestyle. From food to fashion, travel and the arts, Salt Lake magazine has something for everyone. Follow us on Instagram, Facebook and Twitter @SLmag.
Previous article
Concert Review: Robert Earl Keen at The Commonwealth Room
Next article
Concert Review: Punch Brothers at The Commonwealth Room