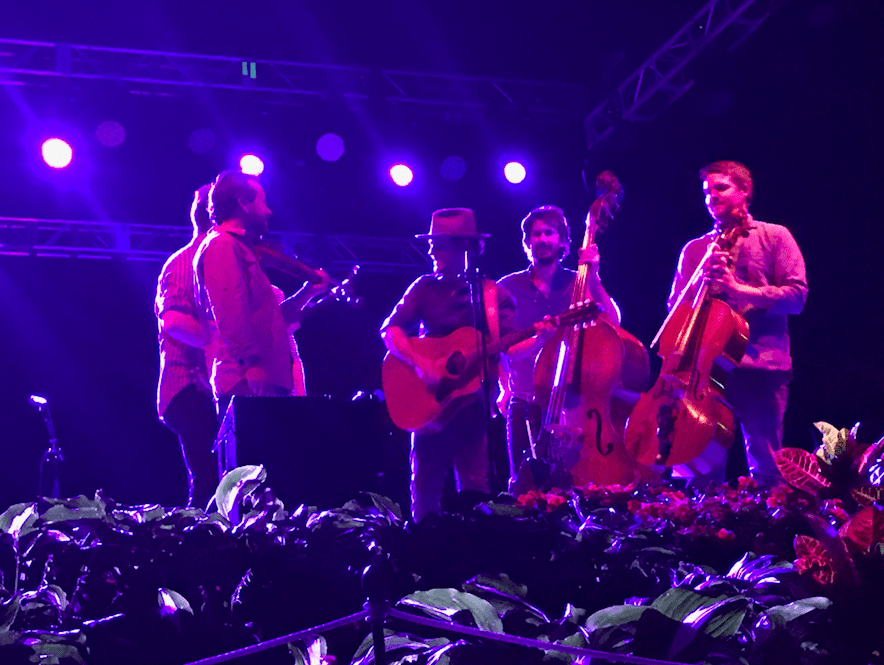 I learned a long time ago that lowered expectations are the key to a happy life. And so, though I would have never bought tickets to the Blind Pilot/Gregory Alan Isakov show at Red Butte on Thursday night, because I find myself largely indifferent to their music, I was more than happy to review it.

Double billings are always a little tricky since opening acts at Red Butte almost always have trouble catching the audience’s attention while the wine and chatter is still freely flowing and the summer sun is still out in full force.

Pity the act forced to take Red Butte’s stage at 7:00.

This was the fate of Blind Pilot last night. And they accepted their fate bravely.

As fans gathered to the left of the stage, the Portland-based band showcased instruments from the banjo to the dulcimer—courtesy of secret-weapon Kati Claborn—and trumpet and organ (sometimes with one hand on each)—by Dave Jorgensen.

As the sun set, the band seemed to catch more of the audience’s attention—and towards the end of their set as they started to play “3 Rounds and a Sound,” the only song of theirs that I knew going in, the crowd rose to their feet and most of them stayed upright through the remainder of the set.

The problem for me, as an unfamiliar reviewer is that at the end of the set, “3 Rounds and a Sound” will be the only song I remember. The rest will remain in my mind as a jumble of sad songs, tight harmonies and repetitive chords.

By the time Gregory Alan Isakov took the stage, the sun had set and the crowd had settled. It was clear as soon as he took the stage that, for once, the order of the double billing was right. Not only the did cover of darkness add to the feel of Isakov’s set—but it was clear that he was the act most of Red Butte’s crowd was there to see.

Isakov must be one of the biggest introverts in music. His stage set-up had him positioned towards the back of the stage and sharing the center space, and a hat hid him even further from watching eyes. While there was a little chatting with the crowd, it was mostly just song after song—and not unlike his predecessors, it all jumbled together a little for me.

And perhaps it was the strings—Cello, upright bass, guitars and violin (complete with broken strings)—or perhaps it’s my musical biases creeping in, but if there is a manic-depressive scale of string heavy indie music, and you have the Avett Brothers on the manic side with their riotous sets, on the other you’d have Isakov and crew representing the depressing side with their aggressively depressing energy. “Sad songs make me happy,” said Isakov with a shrug.

The audience was all about it, though, one guy even called out to an amused Isakov, “You’re my lady friend’s freebie!” and Isakov, rightly, replied, “Well, that’s weird.”

The highlight of both sets was easily the encore, when both bands joined on the stage for an old-timey hootenanny feel covering Blind Pilot’s “And Then Like Lions,” before some Isakov tunes rounded out the night.

And as for me, though I doubt that I’ll ever be able to tell any of the songs I heard last night apart, I’m beginning to think that’s more of a me problem than it is a them problem.  Though, I’ll say, my expectations are effectively raised for the next time either of these bands are in town.

Christie Marcyhttps://www.saltlakemagazine.com/
Christie Marcy is a former managing editor at Salt Lake magazine. Though she writes about everything, she has a particular interest in arts and culture in Utah. In the summer months, you will find her at any given outdoor concert on any given night. In the winter, you will find her wishing for summer. Follow her on social media at @whynotboth.
Previous article
Sunday Sundaes at Fireside on Regent
Next article
Review: Netflix's Friends from College