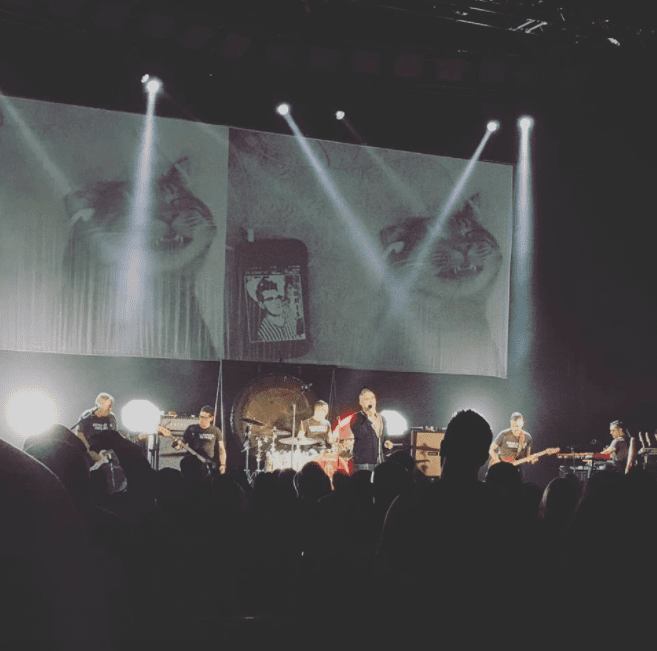 Anne Lamott says that “Expectations are just resentments under construction.” And the fact of the matter is that I already resented Morrissey before I agreed to go to his Kingsbury Hall show and I had essentially zero  expectations.

If I’m being honest, the only reason I agreed to review it was morbid curiosity plus the opportunity to bond with my 16-year-old daughter. In fact, I strongly believe Morrissey—and The Smiths—is music made for 16-year-olds. Those of us who missed out on the music in the small window afforded to us in the angsty teenage years will never get why other people love it so.

This is, I think, because Morrissey is really just a 16-year-old boy in a state of arrested development. This is an idea reinforced by the news that broke a few hours before the show, news that Morrissey had said, among other things, that the victims of people like Kevin Spacey and Harvey Weinstein had basically been asking for it, and, “just disappointed.”

Outrageous? Yes. Fittingly Morrissey? Yes. The guy loves to insert himself into issues that are probably none of his business. And he loves to take the opposite side of the rest of us. He is desperate for attention. He is an emotionally-stunted man. He is a teenager. Please, please, please let him get what he wants.

Lucky for him, Kingsbury Hall was full of people who wanted to pay attention to him. Everyone from emo kids to retirees piled into the venue for a taste of Moz, all of them undergoing extensive increased security in the process (apparently, Morrissey is VERY IMPORTANT). There was no opening act, instead the crowd was treated to vintage film clips on a screen that later lifted to reveal the full band. Morrissey, who was treated to a standing ovation as soon as he took the stage, wore a cardigan—no undershirt—jeans, a necklace and a frown.

He opened with an Elvis cover, “You’ll be Gone,” and worked his way through three other songs before even addressing the audience. “We aim to please,” he told them in his disaffected British accent, “We never manage it, but we aim to please.” Ah, self-deprecating humor.

He then sang the song Ganglord, a happy little tune about police brutality, accompanied by videos of cops beating the crap out of people. The videos were sobering, even for me, a Black Lives Matter supporter. But the effect was lessened when I looked to the right of the stage at the beefed up security guard who was clearly there to kick in some skulls if anyone dared threaten Moz’s general welfare. It was lessened even more with the next song, “The Bullfighter Dies,” in which Morrissey, an animal rights activist, cheers for the death of matadors.

And this is the thing about Morrissey. There is no follow-through in his thought process. Is all life valuable? I’m not sure he’s given any of this the nuance it deserves.

At one point in the show someone shouted out “We love you!” True to Morrissey style, rather than graciously thanking his fans for being there, he instead said, “Well, that’s no excuse. That must have caused you lots of problems in your life. Don’t.” Well, that’s fatalist.

Then, he told the crowd that he called Randy’s Records, Diabolical Records and Graywhale to see if they had his new album and none of them do. “It’s not easy to be me,” he lamented. Obvious doubts that Graywhale didn’t have his album aside, what a crybaby. He filled a venue full of people at at least $75 bucks a seat, most of whom had also bought shirts with his face on them, and he still complained that he isn’t loved enough.

He also told the crowd that David Cassidy died (factually incorrect) before dedicating the song “Home is a Question Mark” to him. I would have liked to have heard him singing the Partridge Family’s “I Think I Love You,” but no. This is still about Morrissey, you see. He did cover “Back on the Chain Gang,” and said it was written by his friend Christie Hynde. Close, Morrissey, her name is Chrissie. But I’m sure she’s a great friend, I could tell by the way you made fun of her age right after getting her name wrong.

Look, clearly this guy isn’t my bag. And that’s OK. In the spirit of being fair, I will close this review with some of the more positive things about the show.

So, I checked Morrissey off my bucket list. But the next time he comes to town, I think I’ll stay home. After all, I got the feeling he didn’t really want me, or anyone else, there anyway.

Christie Marcyhttps://www.saltlakemagazine.com/
Christie Marcy is a former managing editor at Salt Lake magazine. Though she writes about everything, she has a particular interest in arts and culture in Utah. In the summer months, you will find her at any given outdoor concert on any given night. In the winter, you will find her wishing for summer. Follow her on social media at @whynotboth.
Previous article
“What is your favorite holiday tradition?”
Next article
Event Review: John Cleese at The Eccles