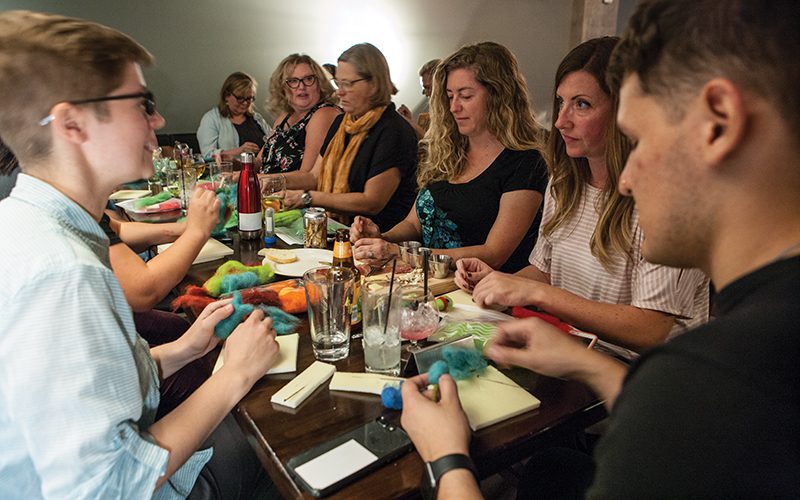 One Sunday in August, a private room at Finca was packed. Nearly 30 people were chatting and laughing like old friends while holding cocktails created by Finca especially for the occasion. Was this a reunion of old friends? A celebratory brunch? Not quite.

Find out more about events, inside and outside UMOCA, at utahmoca.org and on the museum’s Facebook page, facebook.com/UtahMoCA.

It was Brunch for Bibliophiles, a book club hosted by the Utah Museum of Contemporary Art. Everyone there was ready to discuss Tara Westover’s Educated, a buzz-worthy contemporary memoir about so-called “doomsday preppers” in rural Idaho. For an hour an a half the group engaged in a lively conversation, moderated by UMOCA’s executive director, Kristian Anderson, about the book, the Church of Jesus Christ of Latter-day Saints—which features prominently in the book—and about the cocktails at Finca.

Says Anderson, a museum should get outside of its stuffy four walls and meet people where they congregate. So, earlier this year he and his staff started the “Cultural Interventions” series, hosting a free monthly book club open to the public at Finca and a monthly ticketed do-it-yourself art program (paint nights, artist-led drawings and sculptures, photography, etc.) at The Ruin in Sugar House.

This is a notable departure for the institution, which historically has reserved time outside of the museum for its high-level donors, a group called “Level 31,” who are treated to monthly events—studio tours, dinners and, once, even a pool party. Prior to the last year, UMOCA did not host entry-level arts programming outside of its building.

Marketing from the programming is primarily online, via the museum’s webpage and social media, and according to Anderson, the events are reaching people who have never stepped foot into UMOCA. “It’s a very different crowd,” he says. “I do think there’s a handful of people who have come to the museum before but certainly a lot of people are coming to Cultural Interventions, and then coming to the museum afterwards.” But he cautions, this is not how the museum has chosen to define the success of these programs. “I think there’s a danger in saying that we’re going out to do these events as a springboard and saying that it’s only worth the effort if these people then come to UMOCA.  I think it’s an opportunity-building exercise in and of itself.”

In fact, Anderson says if he had to sum up the motivation for creating the programs in one sentence, it would be this, “There’s a lot of hubris for me to say, ‘Come see me at my brick and mortar temple,’” he says, “Culture should be happening in the community, where the people are.” utahmoca.org

Christie Marcyhttps://www.saltlakemagazine.com/
Christie Marcy is a former managing editor at Salt Lake magazine. Though she writes about everything, she has a particular interest in arts and culture in Utah. In the summer months, you will find her at any given outdoor concert on any given night. In the winter, you will find her wishing for summer. Follow her on social media at @whynotboth.
Previous article
Takashi’s Post Office Place a Welcome Addition
Next article
Live PC Give PC This Friday, November 9