Darts Are Flying in SLC

The line on the floor says, “The Bull starts here.” “That’s where you put your foot,” Devin Callaway tells me.

“No, not your toe. Line up your right foot parallel to the line.”

Then a twist to face the board, aim, point and…thud. My dart didn’t even hit the board. 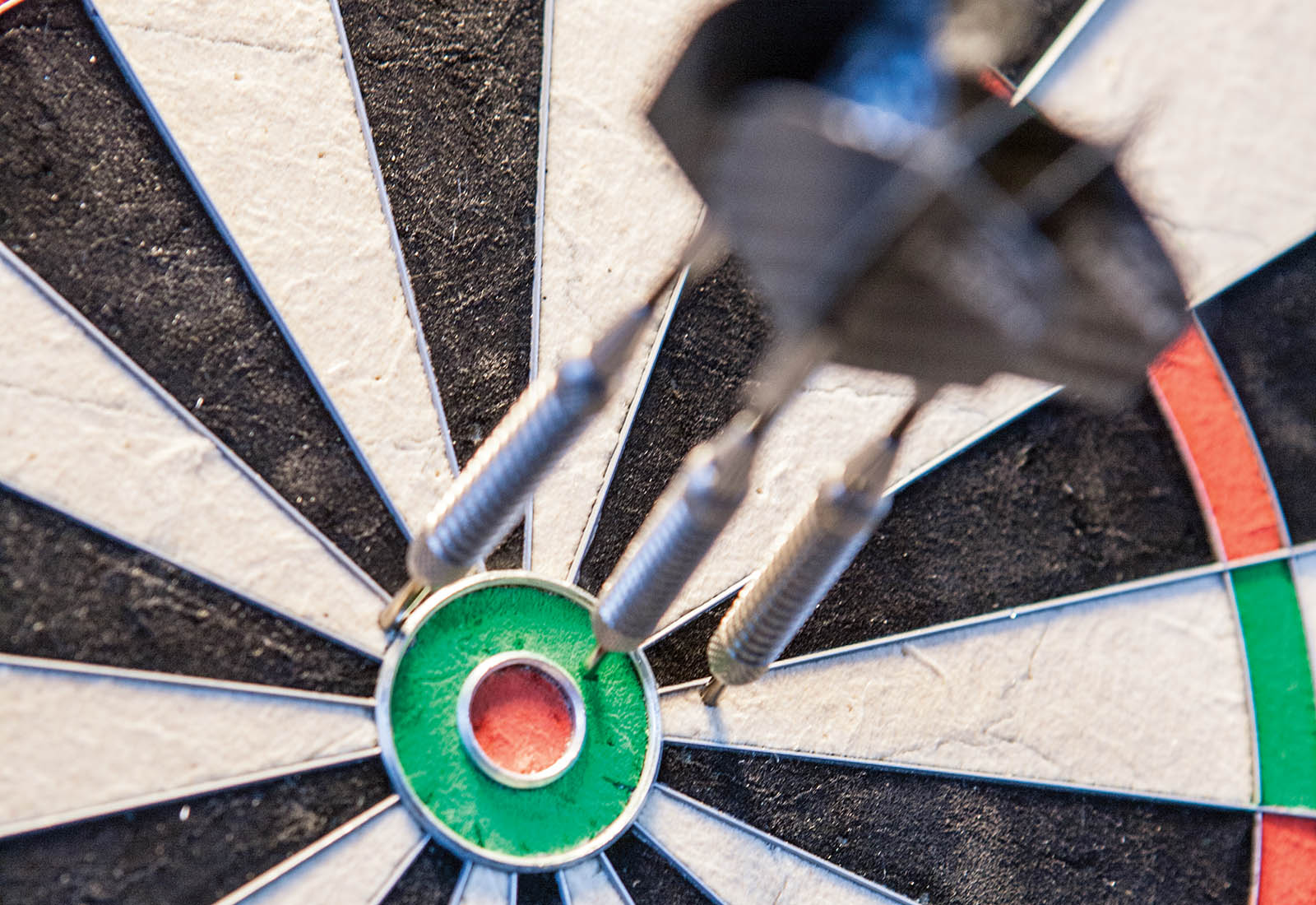 Even if you don’t cork during a leg, you can
say it correctly.
Cork: The bullseye
Leg: A game in a match
Pie: Any wedge on the board
Mugs Away: The loser of a match gets to start the next game.
Ton: A score of 100 points—and hence, the second pun in the Mighty Mighty Mash Tons’ name

Darts, the quintessential pub game, is making a comeback in SLC. The Wasatch Darts has four divisions. The C Division consists of six teams, including The Mighty Mighty Mash Tons, sponsored by TF Brewing. And these are the guys who are tolerating my feeble flings at their practice night. They are throwing darts at another board which is hooked up to an electronic scoreboard.

It’s been 700 years, give or take, since darts was invented as a military pastime where soldiers took turns throwing spearheads at upturned wine casks. (Remember that saying, war is hours of boredom and minutes of terror? Darts was invented during the boredom part.)

Supposedly, wine casks gave way to slabs of tree trunks, tree trunks have growth rings and radial cracks—inspiration for the modern dart board.

In Great Britain, darts is one of the national games—there’s a board in most every pub—and though it’s not yet an Olympic sport, lots of people say it should be. It takes skill, practice and concentration—just look at the expressions on the throwers’ faces.

It also takes beer. After drinking part of one to assuage the humiliation of my early rounds, I threw a bullseye, a double bull, in dartspeak.

Which called for another beer.

TF Brewing (936 S. 900 West, SLC, 385-270-5972) is just one place Wasatch Dart Association plays in the area. Others include Ice Haus, Shades of Pale, Redwood Lounge, The Republican and more. More info at Wasatchdarts.com

See all our bar and nightlife coverage here.

Mary Brown Maloufhttps://www.saltlakemagazine.com/
Mary Brown Malouf is the late Executive Editor of Salt Lake magazine and Utah's expert on local food and dining. She still does not, however, know how to make a decent cup of coffee.
Previous article
Field Guide: Wasatch Mountain Geology
Next article
‘The Store’ is small but it’s got what you need