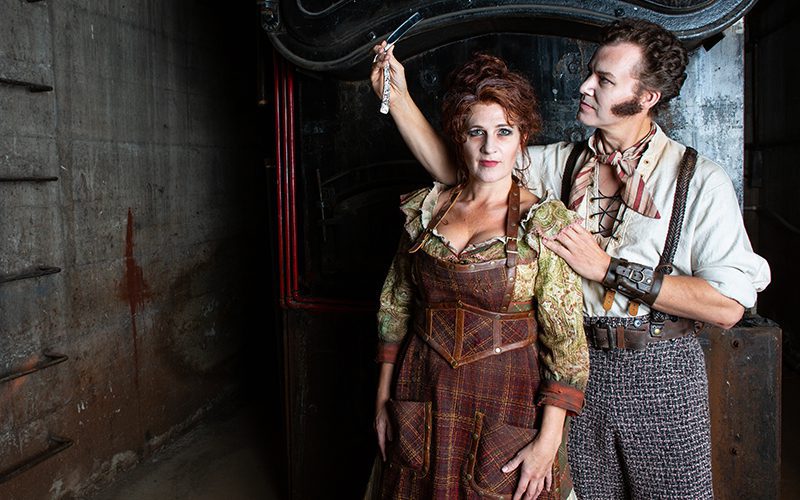 There is no more powerful ear worm than a Stephen Sondheim tune. I’ve been walking around all day with the eerie overture to Sweeney Todd: The Demon Barber of Fleet Street rattling around my head.

Sweeney Todd is an odd musical, much like its protagonist (“his skin was pale and his eye was odd,” goes the line). The macabre play centers on a serial-killing barber in London and is based on an 1846 Penny Dreadful series. Essentially a revenge tale, we meet Sweeney (Kevin Earley) disembarking from a ship on the London docks. He has been rescued at sea under mysterious circumstances and is in the company of a cheery optimist, named, obviously, Anthony Hope (Jonathan Shew), who is out to seek his fortune in London town. Sweeney, however, is seeking answers and vengeance. Soon enough, he visits his old haunt on Fleet Street and meets Mrs. Lovett (Anne Tolpegin) the owner of a struggling meat pie shop, owing to the price of meat and all. (“Times is ’hard sir.”) Soon enough Sweeney discovers his beloved wife is deceased and their daughter, Johanna (Delaney Westfall), in the clutches of the corrupt Judge Turpin (Joe Dellger) who orchestrated Sweeney’s exile to a prison colony in Australia.

And you probably see where this is going. Sweeney opens his shop above the pie store after a, I guess, shave battle (?) with the local barber Adolfo Pirelli (James Donegan) and things get bloody.

The Sound of Music, it ain’t. Sondheim’s atonal score is naturally best described as haunting as is George Maxwell’s grimy set, with two giant mechanical cogs as the main ornamentation (along with a clever trap-door effect that Sweeney uses to slide his victims from barber chair to, well, the bake room.)

Early and Tolpegin steal the show, of course. These are big, stagey parts and they both relish their nefarious roles, no more so during the first act’s show stopper “A Little Priest,” where they hash out their, umm, business plan.

The orchestra and the ensemble is also having fun, this is after all an orchestral play, with operatic flourishes. It’s basically a production made up of the types of parts that every teenage band nerd or drama dork dreams of playing one day. A nod to Sarah Shippobotham, the dialect coach from this production, who kept them all from sounding like Eliza Doolittle.

The packed house on Monday night (Family Home Evening?) ate it all up with a spoon, the gore and death dealing was just another night at the opera, I guess. In fact, the most gasps came from a scene where the Judge’s henchman (The Beadle, Eric Santagata) kills a bird, as opposed to all the throats that get slit in Sweeney’s demonic barber shop. In all it’s a fun, strange night out. The only miss, I thought was the lack of a meat pie stand in the lobby for intermission instead of the usual Costco cookies and too-hot coffee.

Sweeney Todd: The Demon Barber of Fleet Street continues through Nov. 10 and is a perfect complement to the fall season. Maybe leave the kids at home, however. Tickets and info here.

And see all of our theater coverage here.

Jeremy Pughhttps://www.saltlakemagazine.com/
Jeremy Pugh is Salt Lake magazine's Editor. He covers culture, history, the outdoors and whatever needs a look. Jeremy is also the author of the book "100 Things to Do in Salt Lake City Before You Die" and the co-author of the history, culture and urban legend guidebook "Secret Salt Lake."
Previous article
Utah Ski Resorts Announce Opening Dates
Next article
7 Things You Don’t Want to Miss This Week (Oct. 31-Nov. 6)