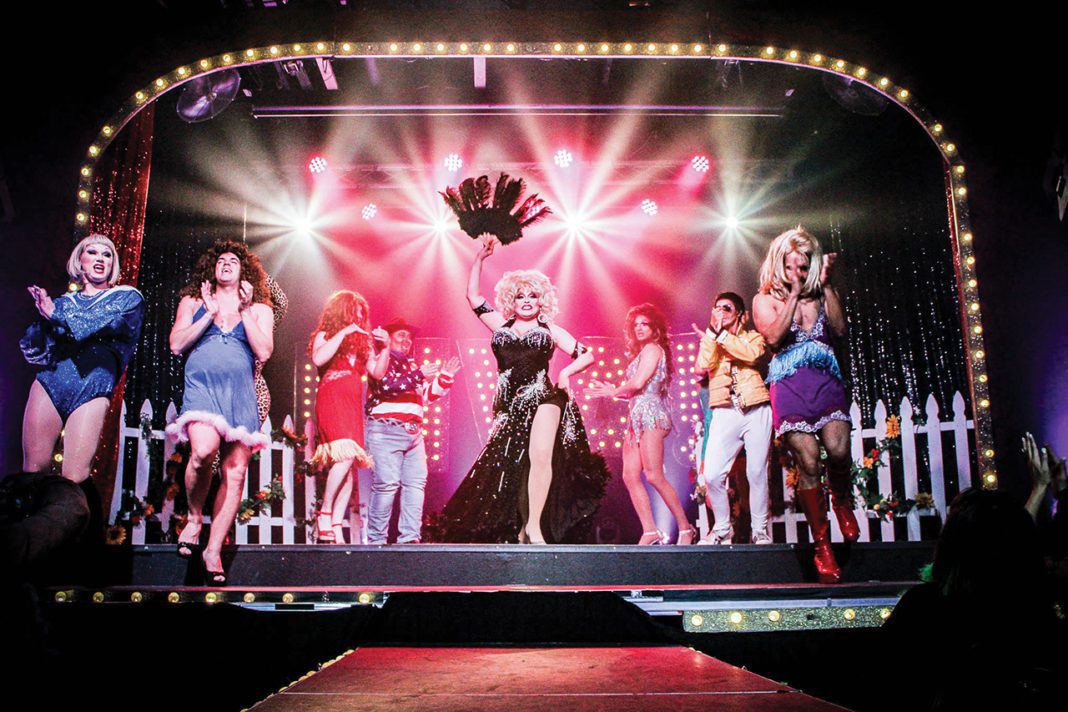 In the mid-1880s, an Italian opera singer with a beautiful falsetto became a Utah sensation. Madame Pattrini was a favorite of Utahns for more than 15 years, performing at music venues, church socials and even Church of Jesus Christ of Latter-day Saints President Lorenzo Snow’s birthday party. The catch? Pattrini was actually a man, though some audience members allegedly were fooled by his high singing voice and glamorous costumes. The other catch? Madame Pattrini’s real name was B. Morris Young, and he was one of Brigham Young’s 56 children.

There is no evidence that B. Morris Young, who was married with 10 children, was queer. But for LGBTQ people, especially gay men, drag has long been an essential underground art form. And drag has a history even in the conservative Beehive State.

The Royal Court of the Golden Spike Empire was founded in 1976. “It started here as a social organization to support the community and create an opportunity for people to connect,” explains Peter Christie, who has been involved with RCGSE since the ‘90s. Decades before legal gay marriage and broader mainstream acceptance, the group, which has chapters nationwide, fostered community—they even started Utah’s yearly Pride celebrations. Members started performing drag as a way to fundraise for local charitable causes, which grew into an essential fundraising tool as the community was ravaged by the AIDS epidemic. “It became a real brotherhood and sisterhood of people who came together to perform and be entertained,” says Christie.

As RCGSE nears its half century mark, Christie acknowledges that the organization’s role has changed. Now, LGBTQ people are less reliant on queer safe spaces to find acceptance and dating has largely moved from bars to apps. (There are actually fewer gay bars in Utah now than in the 1970s.) As the community has changed, so has drag. “In the ‘90s, it was very difficult to be paid as a drag performer, particularly here in Salt Lake,” Christie says. Even the best Utah drag queens volunteered for free and kept tips to fund makeup and costumes. But in the past decade, thanks to an expanded community of queer people and allies and the popularity of shows like RuPaul’s Drag Race, drag has evolved in the Beehive State. The opportunities are bigger—and the standards are higher. “It’s harder to just go and lip sync to a song. You have to put together a production,” Christie says.

Even for casual fans, it’s clear that the Utah drag scene has exploded in the past several years. The sheer number of performances is overwhelming—weekend shows at queer-friendy bars, brunches at coffee shops and restaurants like Pig & A Jelly Jar and year-round touring productions from nationally popular queens. You don’t even need to go Downtown to see drag anymore—there are shows in Ogden, Park City and, yes, even Provo.

Perhaps nobody represents this shift better than Jason CoZmo. CoZmo was born and raised in Magna, but he left Utah soon after high school to perform. After a stint as a Disneyland character, he performed drag for years in southern California, New York and Atlantic City. He became especially known for his Dolly Parton impersonation—on a Good Morning America appearance, even the real Dolly couldn’t tell the difference between CoZmo and herself. But despite his Utah roots, CoZmo assumed that he couldn’t find work here. “I always thought, ‘I need to live in a big city to not only be accepted socially but also to make a living.’”

But after CoZmo inherited a house in Utah from his grandfather, he stayed here as a home base for touring. While taking his act across the country, he began to perform in local clubs—straight clubs. As his following grew, his impersonation show Viva La Diva moved to its current home at Metro Music Hall. Viva La Diva is now his full-time gig, with 40-50 performances per year. CoZmo is an auteur in a wig and heels—he’s the star, director, producer and costume supervisor for a roster of impersonations ranging from Vanilla Ice to Bette Middler.

CoZmo knows that his audience stretches beyond stereotypical drag superfans, and he’s proud of it. Early on, when another local queen made snarky comments about CoZmo’s largely straight audiences, he retorted, “straight people have money too!” For CoZmo, these diverse crowds are a golden opportunity for comedy. “I’ll make fun of the white trash from Kearns, the Mormon wives with their Botox from Herriman and the little gay bottoms on the front row,” he says. Still, CoZmo feels a responsibility to share a message of acceptance, recalling drag’s long history as a political performance. “I wasn’t preaching politics,” he says. “Just me doing what I was doing was a political statement.” By inviting all kinds of people into what he calls his “sanctuary,” he hopes to change hearts and minds. “What other event would you go to where the bishop’s sitting next to the drag queen and the Republican is sitting next to the Democrat and they’re all having a great time?”

This sort of broad appeal can be both validating and anxiety-provoking for the queer people who remain drag’s target audience. Drag Race, the elephant (or, more accurately, 6’4” man in a dress) in the room, has created an entire new industry, complete with merchandise, lucrative media opportunities and corporate sponsorships. On the one hand, this mainstream embrace is a heartening example of the dramatic shift toward acceptance of LGBTQ people in the broader culture. On the other hand, there are real questions about what is lost when a transgressive underground art form is so easily commodified.

While the debates persist, local queens, far removed from big-name TV shows, still use drag an essential avenue for self-expression. This year, at RCGSE’s annual Gay Pride Pageant, two queens competed for the title of Miss Gay Pride. Horchata, who was brand new to drag, and Tara Lipsyncki, a San Francisco transplant and local MC who won the title, gave distinct performances, ranging from a hip-hop dance to a Doja Cat song to a number from the musical Mean Girls (with puppets!). Longtime members of RCGSE met with friends they’d known for decades and patiently explained to me the complex web of leadership roles and pageant titles—emperors and empresses, imperial mothers and fathers, crown princes and princesses. (Seriously, I’m still trying to figure it out.) In between the competition, current and former leaders lip-synced to their favorite songs. Some were in pageant gowns, some were in jeans and a t-shirt and it was all about as far from reality TV polish as you can get. But drag’s messy, beautiful origins were still intact—queer people, in community with each other, putting on a damn show.