Chip Z’Nuff (also known to childhood friends and the internet as Gregory Rybarski) is the ultimate rock’n’roll survivor. His band, Enuff Z’Nuff, has been active for over 40 years, releasing more than two dozen albums and playing rooms of varying sizes all across the country that entire time. For select shows, he’ll even turn the group into a tribute act, The Beatles Rock Show, and the Fab Four’s influence is directly heard when Enuff Z’Nuff takes the stage today, with songs like “Magical Mystery Tour” and “Eleanor Rigby” dotting the playlist, along with Paul McCartney’s “Jet.”

These were all songs that Enuff Z’Nuff played within the first 45-minutes of their Friday night show at Leatherheads (12147 South State St., Draper) over this past weekend, a gig that saw the group turn out a fanbase of several dozen diehards who were on hand to catch an act that’s never lost the faith, despite countless changes to the looks, feels and sounds of American rock’n’roll since their self-titled debut album was released in 1989.

At that moment, the Chicagoland group was riding high, scoring two hits from that album in 1990 via “Fly High, Michelle” and “New Thing.” Both videos were MTV staples and featured a bubble-gum-bright look and a sound that incorporated a blend of everything that’d preceded them in the last couple of decades. There was the high hair of groups like Poison, the punk-meets-power-pop sonics of Redd Kross, the glammed-out hard rock of Dramarama.

Of course, 1991 was “the year punk broke” and Nirvana and their kin would take over the rock charts for the near-term future. While a host of their contemporaries lost careers at that moment, Chip Z’Nuff kept his band going, losing his co-founders along the way, while he cemented himself into a role as the band’s songwriter, lead vocalist, bassist and emcee. The latter’s job’s part of what makes an Enuff Z’Nuff a unique experience.

At Leatherheads, Z’Nuff basked in the glow of his fans’ love, reminding them, over and again, of his band’s long history, namechecking everyone from Tupac to David Letterman. Plenty of songs came with a short introduction, with Z’Nuff referencing past Utah shows and off-color hijinks at hotel rooms and tour busses within the state’s limits. Z’Nuff works blue and no one’s shocked by what might come of the veteran entertainer’s mouth, a throwback style that’s bit circus carny and a bit Borscht belt comic, in addition to his obvious role as a rock’n’roll bandleader.

These days, Chip Z’Nuff’s band is made up of Tory Stoffregen on lead guitar, Tony Fennell on bass; and Daniel Hill on drums. Together for roughly seven years in this unit, it’s not uncommon for one member to drop away for another gig, only to return to the fold later. In fact, one of Z’Nuff’s riffs was a rundown on who played in what other projects and when—a packed, little information blast mid-show.

The band played well over an hour before Z’Nuff said the magic words, cuing up “Fly High, Michelle” and “New Thing” and for a good 10 minutes, the superfans were in bliss. These were the moneymakers, the tracks that suggest you cough up $20 to see Enuff Z’Nuff on a random Friday night in 2022. Humorously, as the tracks ended, Z’Nuff pretty much said the audience didn’t need to beg for an encore as Z’Nuff and Fennell traded instruments and the rock went into a 12-to-15-minute jam that looped through some Edgar Winter, Stone Temple Pilots, Foghat and even another pinch of “New Thing.” It was a strange closer, but the band had finished up a 90-minute set almost to the minute.

As the group wandered through the green room’s curtain minutes later, they were rushed by the small audience on the dancefloor, everyone huddled around for autographs, selfies and handshakes. From out of nowhere, the PA announced that karaoke was moving inside from the patio, per police request.

Just another night on the road for Enuff Z’Nuff. 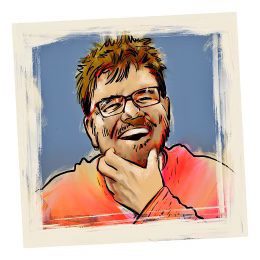 Thomas Crone
A freshly-minted transplant to Salt Lake City, arriving here in January of 2022, Thomas Crone serves as the Music Editor of City Weekly, while also contributing online coverage of the local music, arts and food/beverage communities to Salt Lake magazine. Unlike many of his new kinfolk, he prefers the indoors.
Previous article
The Best Burgers in Park City
Next article
LOVELOUD Fest Returns With Message Of Love And Acceptance