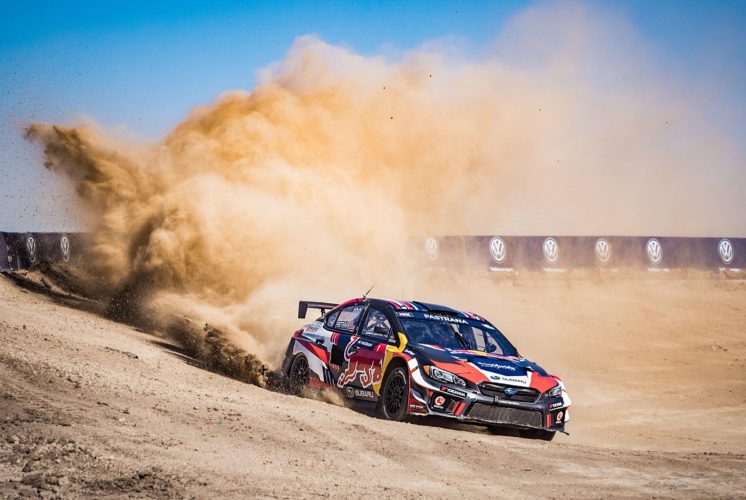 In partnership with the Utah Sports Commission, Nitro World Games is heading back to 'the State of Sport,’ for a two-day event August 16th and 17th, with Saturday August 17th open to the public.

The world’s best motorsports and action sports athletes will once again converge this summer to battle for the top spot in their respective sport disciplines at Nitro World Games Utah. Nitro Rallycross, the race that revolutionized rallycross, returns along with Moto Quarterpipe and FMX Best Trick.

“Last year we proved that race cars could fly and this year we have re-designed the track to be even crazier.” said Travis Pastrana on the 2019 Nitro World Games. “All of the athletes couldn’t be more excited that we are heading back to the UMC with NWG and NRX. Utah has been Nitro’s home since the beginning and we are excited to continue pushing the limits of action sports right here where it started.”

Fans won’t want to miss the jam-packed finals featuring unrivaled action, intense competition, and triumphant celebrations. After Nitro Rallycross’s 2018 debut, drivers are impatiently waiting to get back on the track that was dubbed, “The most unique, exciting, fun, amazing Rallycross track ever built.” by renowned champion driver, Tanner Foust.

The multiple lines and features of the innovative Nitro Rallycross track make for intense racing that cannot be matched while the massive 120’ jump keeps both drivers and spectators on the edge of their seats. Fans can expect to see the biggest names in the sport such as Travis Pastrana, Timmy Hansen, and Ken Block contend for a prize purse and possibly more importantly, bragging rights for the next year.

Moto Quarterpipe, the 2018 event that shattered the world height record, also returns by popular demand. The Nitro World Games Moto Quarterpipe is a one of a kind, innovative behemoth that stands 32’ tall, 70’ wide, and is the largest mechanical moto quarterpipe in the world. In its 2018 debut only six athletes were brave enough to step up and attempt to hit it. The inaugural champion Colby Raha battled it out against a top tier field as the riders surpassed heights of 40 feet off the ramp deck placing them more than 70 feet from the ground. Raha knew 2018 was his chance to make the record books and went all in launching 45’2” off the quarterpipe while simultaneously cementing his name in history. In 2019 the demand is even higher for this prestigious event and fans can expect the biggest names in FMX to join the fun.

Rounding out Nitro World Games Utah is FMX Best Trick, the event that reignited FMX competition. Back for its fourth year, FMX Best Trick returns once again after setting world’s firsts and never seen before tricks year after year. The FMX Best Trick set up launches riders up to 60 feet in the air giving athletes added time to execute far more technical tricks. 2019 promises to be no different with the planet’s premier FMX riders prepping for the most explosive FMX competition of the year.

'Nitro World Games is one of the top action and motorsports sports events in the world,' says Jeff Robbins, president and CEO of the Utah Sports Commission, “Having it return to Utah in 2019 will drive significant economic impact to the state and showcase once again why Utah is the State of Sport.'