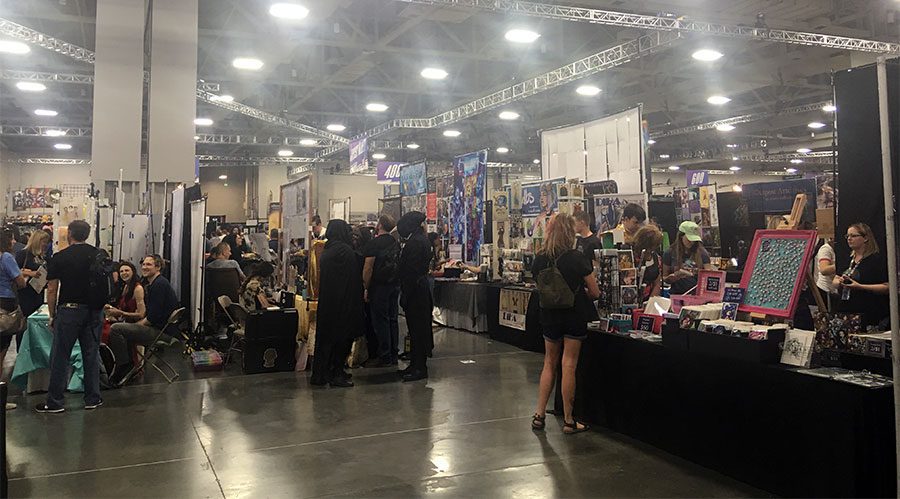 Finding that sense of awe at FanX

Some might say the best thing about FanX, Salt Lake City’s biggest pop culture/sci-fi/fantasy convention, is the assortment of A-list guests, like Tom Holland; others would point to the panels of experts talking all things nerdy; and, still, others would mention the thousands of fans dressing up as their favorite characters (see them here). For me, it’s the unexpected, the stuff you didn’t see coming that offers a sense of awe.

As we made our way around the convention hall this weekend, we came across a merchandise booth featuring a special guest: former Miss WrestleMania Vickie Guerrero. Professional wrestling fans, like me, know Guerrero for her WWE heel gimmick, coupled with her high-pitched catchphrase, “Excuse me!” Since leaving the company in 2014, she has made occasional guest appearances on WWE programming.

Guerrero wasn’t listed among celebrity guests on FanX’s website. Her appearance came as a surprise, truly that sense of awe, with a shot of anxiousness, as I quickly tried to come up with what I would say to her. In the end, we chatted about her surprise appearance at the 2018 Royal Rumble, entering the ring to battle 29 other women.

For others, that sense of awe came with a preview of dreamscapes, an immersive art experience at The Gateway, featuring 14,000 square feet of dreamlike settings.

Going from dreams to nightmares, we were treated to a preview of Dead City, a new haunted house set to terrorize Murray this Halloween season.

Wonderful dreams, nightmares and everything in between can typically be found in 11×17 prints in FanX’s Artist Alley, my favorite area of the convention. Along with marveling over the talented local and travelling artists’ work, fans can chat with the artists themselves about their inspirations and techniques. We spoke with Faith Newman, who blends fantasy and realism in her graphite drawings. See her portfolio here.

See what else put us in a sense of awe each day in our FanX videos:

The fall edition of FanX 2019 was held at the Salt Palace Convention Center in Salt Lake City from Sept. 5 to 7.

Jaime Winstonhttp://www.saltlakemagazine.com
Jaime is a contributing writer for Salt Lake magazine. Formerly, he served as our editorial intern, then as our assistant web editor, and, finally, as our web editor. Now, he works full time at Weber State University, where he talks to ducks and people think he's crazy. While he covers many different topics, he is especially interested in nerdy entertainment, from artist alley at FanX to Sundance's Midnight screenings.
Previous article
Tomato Days Dine-a-Round
Next article
Cosplay at FanX Fall 2019