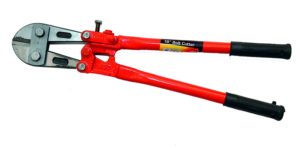 Of course, the first thing I had to know is why a vegan taco joint is called Boltcutter. I don’t know—the word “boltcutter” sounds violent, almost—used for cutting chains, padlocks, bolts and wire mesh. In other words, breaking in or out of something. I couldn’t connect the image with the peaceful, non-violent intentions of vegans. But of course, that’s the point. Sticking to a diet that excludes all animal products implies freeing all the penned-up domestic animals like cows and pigs, on which most tacos depend. (Where would they all go? I picture confused cows wandering aimlessly down streets, wondering where their next meal is coming from.) 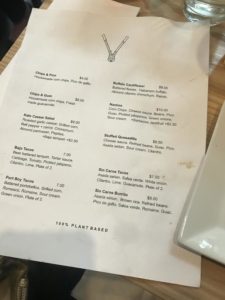 See the boltcutter logo? Bam! And it’s positioned like a V, for vegan.
Anyway, that’s the idea behind the name.

It’s a bit funny when you compare these cows with the humans dining at the bar at Boltcutter. 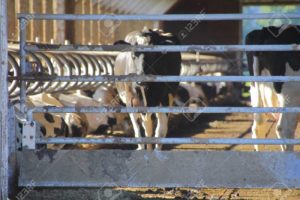 Many of the vegan restaurants I’ve visited in the million years I’ve been reviewing restaurants and writing about food have inspired the conclusion “pretty good, for vegan food.” The ideology seemed to deny the tastebuds; the emphasis was on the food was not and not what it was. Meat meets the desires of a certain set of sensors in our mouth, the ones that respond to umami. Fat carries flavor and cutting out dairy, cheese and butter requires substituting something else.

Boltcutter’s mission is to take veganism into the mainstream of dining—cutting the fence (more boltcutting, I guess) that segregates us by dining preference. Food—no matter your feelings on foie gras and veal—should taste good.

Boltcutter accomplishes this, with the help of a good bar list, featuring agave spirits. No corporate soft drinks here, but Fentiman’s ginger beer is a good sub for non-drinkers if they’re out of agua fresco, which they were when we visited. Chips and guacamole or pico to start remind you how many places serve vegan food that isn’t even labeled as such. It’s good, just a few degrees of citrus off my platonic ideal of guac, but that’s quibbling. Likewise, the house margarita could have lost the spiced orange bitters, or the bitters could lose the clove—clove is a bully that tends to overpower other flavors.

The Port Boy Tacos, built around hefty chunks of batter-fried portobello mushrooms, with charred corn, romesco sauce, were terrific—a mix of textures, crisp and tender, with the mushrooms bringing umami to the tortilla. All the other dishes we tried were based on seitan, the wheat protein (incomplete) that has all but replaced soy protein for vegans. The texture is beautifully chewable and partcularly suited to Mexican spices. And I’m glad we’re calling it by its actual name, instead of using those quotation-marked euphemisms “chicken,” “beef,” “turkey.” In the stuffed quesadilla at Boltcutter, seitan was give the asada treatment and it made a quesadilla into a meal, stuffed inside a tortilla with refried beans, guacamole, pico de gallo and a cheese sauce (meaning, it’s not cheese.) 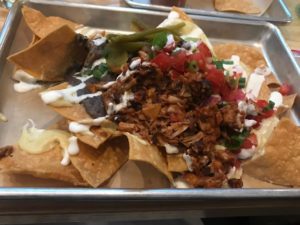 Nachos, a dish so dependent on cheese that it seems almost silly to attempt them in a vegan kitchen, are also drizzled with cheese sauce over a pile of shredded jackfruit, beans, guacamole and pickled jalapenos.

Boltcutter was crowded with millennials, in full baseball cap regalia, and the service is what I’ve come to expect from this generation (yes, I know this makes me sound old): overly familiar (I know, even that word sounds old), slightly inattentive but well-intentioned, with more enthusiasm for the ideals of the restaurant than with the needs of a customer.

Boltcutter does accomplish the goal of making food that is delicious even to non-vegans; it’s not exactly mainstream because it is still defined by ideology, but why not? Tuscan, Eritrean and Basque food are all defined by a culture. I think everyone should stop preaching and start tasting. I also think everyone should try vegan when it’s as good as the food at Boltcutter.

Get out your boltcutters and free yourself from your preconceptions.

Mary Brown Maloufhttps://www.saltlakemagazine.com/
Mary Brown Malouf is the late Executive Editor of Salt Lake magazine and Utah's expert on local food and dining. She still does not, however, know how to make a decent cup of coffee.
Previous article
Theater Preview The Music Man at the Hale
Next article
Ogden’s Foodie Bars