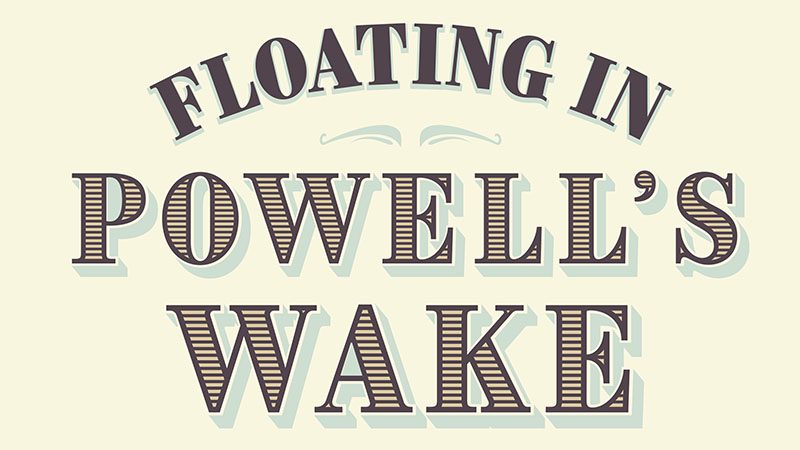 In the 1800s, humans were busy scurrying across the globe prying into the blank spots on the map, why? Because, of course, they were there. From the frozen poles of the Earth to its darkest jungles, we had a guy on it. Here in the United States, the transcontinental railroad had opened up the nation. But, despite nearly a century of poking around by native peoples, Spanish padres, men military, mountain and Mormon, there remained one big question mark over the terrain through which flowed the Green and the Colorado Rivers.

On then-existing maps of the area between Green River Wyoming and St. Thomas, Nevada, there might as well have been a label, in all-caps, bolded, italicized, underlined and with exclamation points: “DO NOT GO!!!!!” No one, at least no one who lived to tell the tale, had ever navigated these rivers. Why? Because it was a really dangerously dumb idea. Still, it was there. So. We put a guy on it. A one-armed Civil War veteran by the name of Major John W. Powell who said (not really) whatever was the 19th Century equivalent of “Hey, man hold my beer, while I try this” and set off to see just exactly what was there. The answer? Hell.

On a sunny day last October, our captain, Kent Tschanz, pulled on the oars to scoot us down the flat water of the Green River’s Labyrinth Canyon section. Tschanz is a dealer in rare books and collectibles. He put together the trip to help out historian Richard Turley who is working to float all the major sections of the Green and Colorado Rivers to research a series of books on Powell. This particular section, although stunningly scenic, isn’t as popular as others on both rivers that feature more thrilling (and dangerous) sections of whitewater, so it’s harder to hitch a ride. Tschanz volunteered his raft, along with his Rain-Man-level knowledge of western history and we set off to explore the Labyrinth together on what promised to be a very PBS/Ken Burns-ey trip. After a few hours of small talk I finally just asked Turley, “So Powell was just nuts right?”

“No.” Turley chuckled. “He was supposed to be a minister.” Turley is a now-retired historian for the Church of Jesus Christ of Latter-Day Saints who, among many accomplishments, wrote a well-respected tome on the Mountain Meadows Massacre (Massacre at Mountain Meadows: An American Tragedy, with Ronald W. Walker and Glen M. Leonard.) Powell crossed paths with many of the notable (or notorious) figures prominent in that dark chapter in the history of the Mormons’ Utah.

“When I was working on the Mountain Meadows research, Powell kept showing up,” Turley said. “Brigham Young had written to his people in the Southern half of the state and told them to watch for debris from his first expedition.”

The son of an itinerant preacher from Shrewsbury England, who pressed him to become a minister, Powell eschewed the family business and became fascinated with geology, fossils and the natural sciences. As a young man, he restlessly explored the rivers and lands of the midwest. When the Civil War broke out, his experience earned him a commission in the Union Army as a cartographer, topographer and military engineer. At the Battle of Shiloh, commanding an artillery battery, Powell raised his right arm to give the order to fire and a Minie ball blew it to shreds. After the war, Powell’s fascination with the natural sciences became a passion that led him to a job as a curator at the Museum of the Illinois State Natural History Society. The post would allow him to do what he really wanted to do—meaningful science in the field. The field lay West.

Powell’s cameos in Utah history piqued Turley’s interest and, while plenty of ink has been spilled about Powell’s three (three!) expeditions through the Grand Canyon, including Powell’s own account, Turley took the bait and set out to write what he hopes will be a clarifying and enlightening set of books on Powell’s adventures. In 1875, Powell published a hefty tome, with a hefty title, Report of the Exploration of the Colorado River of the West and Its Tributaries. The book became the Urtext of the rivers’ exploration, but Turley is a man who jots his tittles and crosses his jots. “That book is the basis for so much of what has been written about Powell,” he said. “The problem with it is that Powell weaves all three trips together as if it was a single trip and it was his personal journal.”

Powell mashed-up the experiences primarily because he needed to make a splash for the United States Congress, his backers. He was constantly raising funds for his research and expeditions. But Turley believes that each expedition “is an adventure in itself” and deserves to be accurately conveyed.

“You have two sets of historians in Powell’s case, the academics and the river runners,” he told me. “Academics have largely relied on Powell’s book but you have these amateur historians but experienced river runners who have been there, seen what Powell says he saw and go, ‘yeah that doesn’t add up.’”

Although there is no possible way to actually re-create Powell’s trip—primarily because Powell and his men were running a wild river, there were no dams at Flaming Gorge and Lakes Powell and Mead—Turley has set himself to floating as many sections as he can and approximating what Powell and his men saw with his historian’s eyes.

Powell’s first trip starting in 1869 was essentially a failure except for the fact that the Major and just two of the nine men he set out with actually survived. Powell was an experienced river pilot, but his experience was on the wide, flat rivers of the East. Basically, he had no idea what he was in for.

“There was a myth that somewhere along the river was something called ‘The Great Suck,’ a giant waterfall that descended into the depths of the Earth,” Turley said. “Powell was accustomed to running rivers over long stretches but he had no experience with whitewater.”

The Major outfitted himself with Whitehall boats, large wooden craft with flat bottoms, more suited for the Mississippi than the Green and Colorado. They carried a massive amount of supplies, including scientific equipment that Powell doggedly employed as his men eyed the dwindling supplies and long unknown ahead and grumbled.

“Powell knew enough about geology and the altitudes to estimate the drop in the river systems and thought with all of that descent, the river would not be as violent as the myths had suggested,” Turley said. “He prepared four boats and sat in a chair attached to one of the decks. He would look forward while his oarsman faced back.”

Lashed to the mast, as it were, Powell had to make calls at each rapid. They would either carry the heavy boats around in massive steep portages or send a rope down to follow through the unknown. One man left early on, one boat was lost at a place the expedition chillingly named “Disaster Falls.”

“And there was one disaster after another,” Turley said. “They realized they were going to run out of food, they were losing supplies and equipment, three men abandon him at Separation Point attempting to hike out to find a settlement. They were never heard from again. But he became a hero for just surviving—it was a Neil Armstrong kind of accomplishment. That reputation was helpful to raise money to return for his real goal, science.”

For the first trip, Powell had assembled a motley crew of mountain men and wanderers, trappers and hunters lured by the idea of discovering minerals and fresh fur sources as well as ample game along the way. That, as we say, did not pan out. The hunting was poor and prospecting was put on the back burner to merely surviving. So on his second and third expeditions, Powell returned with a more rounded-out crew, science and military men. He worked with the Mormons to arrange food drops along the route and although the latter expeditions were no less harrowing, Powell’s planning allowed him to accomplish his scientific goals.

The October trip through Labyrinth Canyon was blessedly uneventful and a far cry from what Powell experienced. Powell and his men raced through that section with an eye on supplies and worry about what awaited them in the Grand Canyon. We enjoyed a much more leisurely pace.

“Today we have great equipment,” Turley said. “We have communication with people on the outside and ways of getting help. Past a certain point, Powell and his men had no way of getting help, no way of reprovisioning. There was very little game. They were repeatedly soaked, the boats were swamped or capsized. By the end they were taking out their sodden flour and straining it through cheesecloth, eating rancid apples and shreds of bacon. But these weren’t 21st Century men. They were accustomed to this idea of army discipline or mountain man discipline and somehow they got on. They were brave, no question but they were doing something that anyone today would think was foolhardy.” So, basically, Powell was nuts.

We asked Richard Turley to recommend his favorite books about the Green and Colorado and Powell’s expeditions on the rivers. All are available, along with many more, at Ken Sanders Rare Books, 268 S. 200 E, SLC, 801- 521-3819

THE CAPTAIN: Kent Tschanz is the co-owner of Tschanz Rare Books with his wife Katie. Kent has been active in the book trade since the late 1990s starting out at Sam Weller’s Books (where he met Katie) and then at Ken Sanders Rare Books.

THE GUIDE: Richard Turley is a historian and author. He worked from 2008 to 2016 as a historian for the Church of Jesus Christ of Latter-day Saints, retiring in 2020 from the LDS Church’s communications department. He is researching a series of books about John W. Powell’s expeditions.

THE PASSENGER: Jeremy Pugh is the Editor of Salt Lake magazine, sporting sunnies from Rheos that he’d hoped would reflect the grandeur. He is also the author of 100 Things to Do in SLC (Before You Die) and the forthcoming guide book Secret Salt Lake (Spring 2021, Reedy Press). He will generally say yes to anyone offering a river trip. verydynamite.com

Jeremy Pughhttps://www.saltlakemagazine.com/
Jeremy Pugh is Salt Lake magazine's Editor. He covers culture, history, the outdoors and whatever needs a look. Jeremy is also the author of the book "100 Things to Do in Salt Lake City Before You Die" and the co-author of the history, culture and urban legend guidebook "Secret Salt Lake."
Previous article
‘Real Housewives’ Recap: ‘Sinners in the City’
Next article
Sundance 2021: ‘One for the Road’