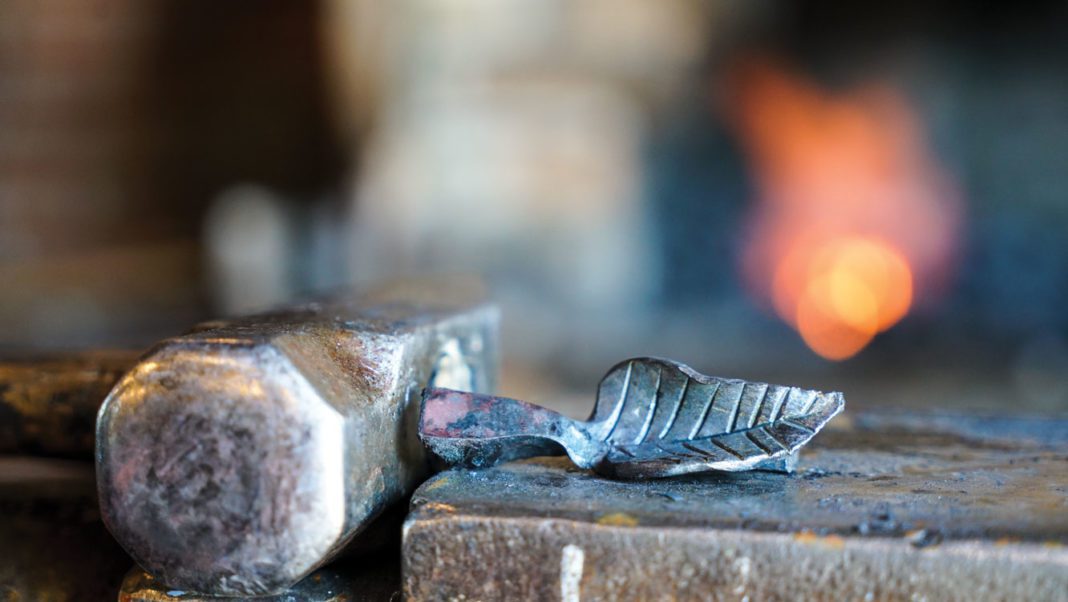 When asking children, “what do you want to be when you grow up?” you never expect them to say blacksmith. But Aaron Richardson knew he wanted to learn this ancient craft when he was only 14. “I visited a blacksmith in his shop at This is the Place [Heritage Park]. He was making knives and playing with fire, and I knew I wanted to try this,” says Richardson. After the visit, he volunteered for two years in the very same blacksmith shop that stoked his curiosity—and he’s been pounding metal for the past 16 years.

“I originally started doing it part time,” Richardson remembers. “But then there was a fantastic opportunity to do it full time. It just made sense.” Now, Richardson is the owner of Ragnar Forge in Eden, Weber County.

The term blacksmithing actually means “to hit the blackmetal,” and Richardson distinguishes his trade from others, like welding. “Blacksmithing is unique in that we make things by moving the metal rather than adding to or removing from it,” he says. Blacksmiths used to be a village fixture, but that’s no longer the case. “It’s really more of an art now,” Richardson says  “Nobody needs a blacksmith in America anymore. It’s a luxury item you have because it’s awesome, not because you need it.”

Ragnar Forge specializes in hardware and historic reproductions. “Reproductive work is really rewarding for me,” Richardson says. And the quality of his replicas of ancient Viking and pioneer items speaks for itself.

“Blacksmithing is a niche market,” Richardson says, “but there are those of us keeping the craft alive and passing it on to other people.”

Ashley Szanterhttps://www.saltlakemagazine.com/
Ashley Szanter is a contributing writer for Salt Lake magazine as well as a freelance writer and editor. She loves writing about everything Utah, but has a special interest in Northern Utah (here's looking at you, Ogden and Logan).
Previous article
Tech for Tots: UCAT’s quest to make life easier for the disabled.
Next article
GIV Group offers options to greed-driven development.