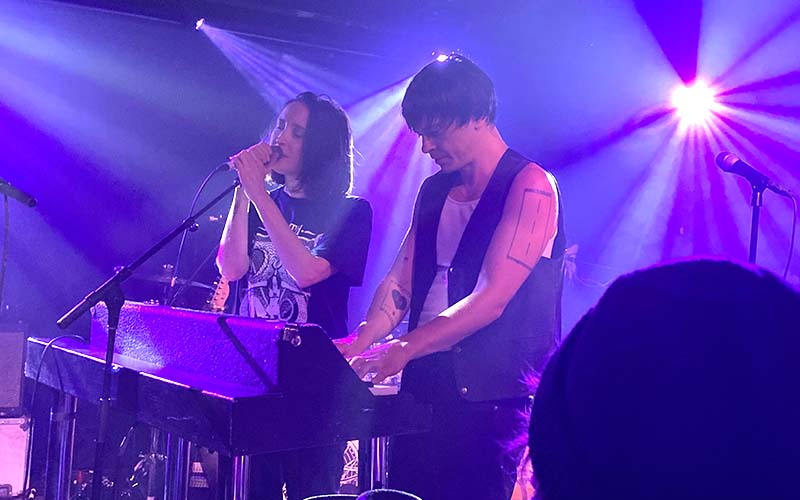 The Urban Lounge felt a little like an exclusive speakeasy on Tuesday night. Fortunately for me, I knew the password–July Talk! The Toronto-based sextet uncorked the lightning from the bottle and gave a thunderous and theatrical performance. For those not yet acquainted with July Talk, they’re an award-winning avant-garde Canadian alt-rock band whose songs blend a dark, gothic rock with light, airy pop. The contrast in genre is accentuated by the lyrical themes of life’s blurred contradictions such as love and hate, trust and deception, or madness and sanity. On stage, they played it out with two lead vocalists, Peter Dreimanis and Leah Fay. Dreimanis reached into the darkness with his smokey, almost demonic vocals (think an unrestrained Tom Waits), while Fay countered with her impish, sweet pop (think Cyndi Lauper).

The well-choreographed performance began with their alt-rock hit “Picturing Love,” the first song from their 18-song set. “Picturing Love” explored the boundaries between reality and fantasy, in particular, how our online fascination with celebrities and other strangers distracts from real love and happiness. In contrasting vocals, Dreimanis broke away from the fantasy life while Fay tried to lure him back in with her siren call. Captivated by the opening beat, I couldn’t look away as the song moved from light hypnotic harmonies to ground-shaking rock. This operatic power play continued with “Lola + Joseph,” “Guns + Ammunition,” “Beck + Call,” and “Push + Pull.” Fay and Dreimanis invited us into their struggle when they jumped off the stage and lay on the floor in the center of the crowd for “I’ve Rationed Well.” I hope they have a good dry cleaner.

July Talk also mixed great music with performance art—Fay and Dreimanis acted out the lyrics while the rest of the band delivered the musical emotion. For “Headsick,” a song about the madness in a toxic relationship, you could see the temporary insanity forming in Dreimanis’ expressions as the song progressed. Other stand-out songs included “After This” and “Summer Dress.” Much to the crowd’s delight, they played “The Garden” for their encore. One fan likened them to peppercorns on vanilla ice cream—two contrasting flavors that blend perfectly. I tend to lean toward Squatters Outer Darkness Imperial Stout—Dark, creamy and packs a punch.

Austin-based Darkbird opened the show. The six-piece band fronted by lead singer Kelly Barnes fashioned ’80s-styled new wave with a fresh, modern approach. They started their eight-song set with the retro rhythmic rocker “Crimes.” They moved nicely between early 80’s new wave dance vibes (think early Blondie) with “Kiss Goodbye” and “Heartbeat” to hard-driving punk rock with “Bad Self.” Barnes delivered an energized performance pumping up the crowd and setting the tempo for the evening. With a forthcoming full-length album on the horizon, Darkbird is a band on the rise. They have a growing catalog of interesting and innovative songs, and I’d like to see them headlining in the near future.

Both bands displayed a fiery passion for their art. Darkbird is just starting to build a national reputation while July Talk, already an award-winning alt-rock band in Canada, is still flying under the radar in the US. Great music and high art, however, know no borders. I felt privileged to see such remarkable talent in an intimate space.

Writer and director Nicole Holofcener has undoubtedly proven her talent, but her 2023 Sundance feature, You Hurt My Feelings, comes off frustrating, not funny.