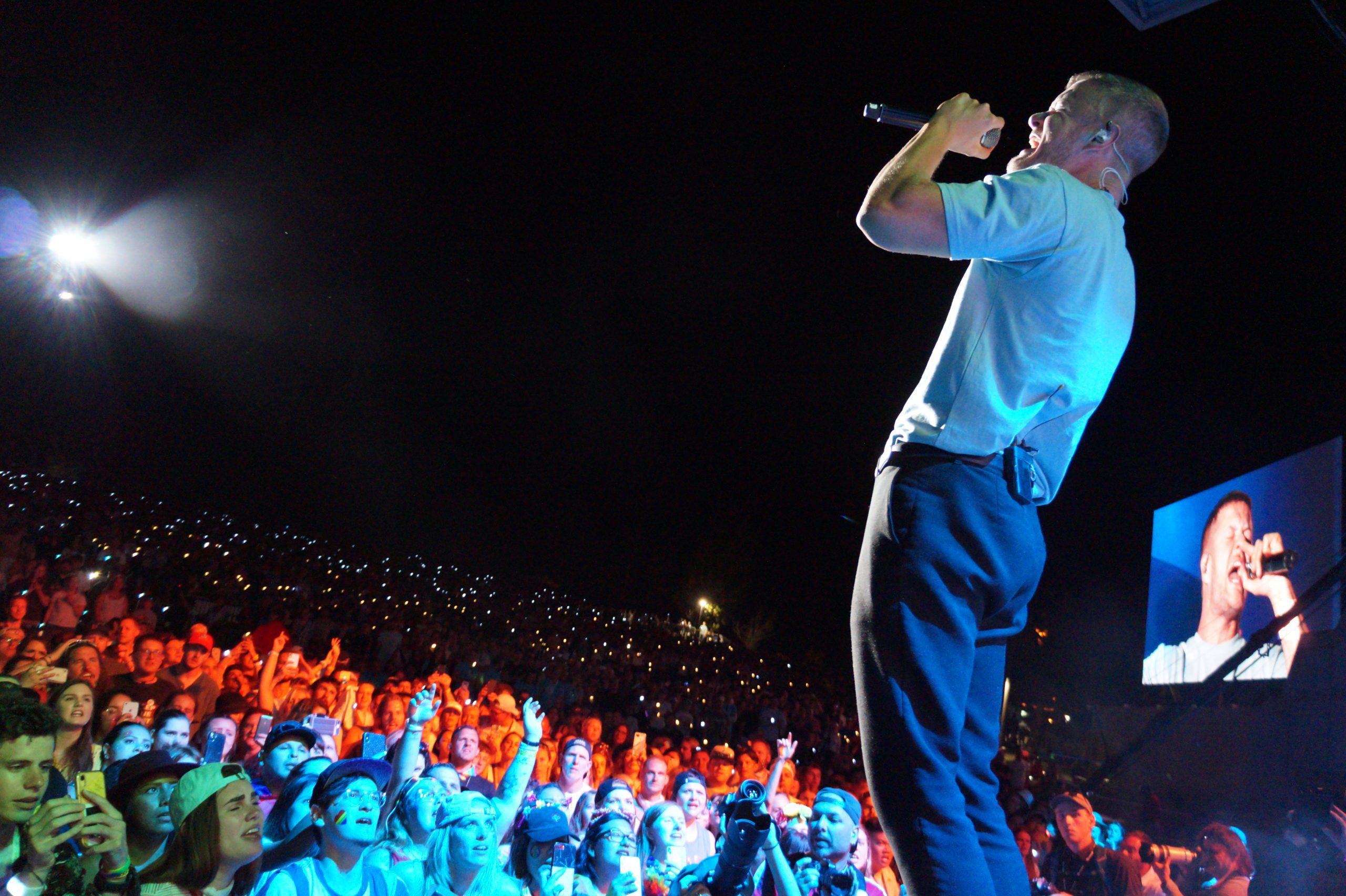 Last Saturday, June 29, was the LOVELOUD sophomore year, and proved itself to be a continuously-growing event that brings together SLC’s LGBTQ+ youth, and commands the attention of their allies. Live streamed worldwide from USANA Amphitheater, the event spoke to international audiences more broadly about the very real, life-or-death consequences of stigmatizing these youths, and the unified goal we should share in one day eradicating conversations surrounding LGBTQ+ discrimination, once and for all. VIDEO BELOW.

Once again, festival founder Dan Reynolds took the helm in the day’s festivities, beginning with the red (see actually: blue) carpet. It was the first appearance of many in which, upon his entrance, a hush swept over the room. Humble as ever, though, Reynolds took his time answering reporters’ repeated questions about what LOVELOUD means to him. The other stars of the day-long festival strutted by for the cameras, including emcee Kalen Allen, who hilariously pointed out how hot it was to be in his one-piece, reflective getup. All the while, the anthemic “Born This Way” provided the soundtrack for the catwalk.

As with previous installations, the message of the day (which lasted from about 2:30 to 11) was love, love, love. The lineup of performers was mostly new, and featured an array of genres including rock, pop-meets-dubstep, indie pop, and guitar ballads. For efficiency’s sake, perhaps, their acts were rationed between the main stage and a stage set up in the center of the amphitheater: Gnash, the first act performer to take the latter, amusingly took audiences a while to spot.

K. Flay was a total mood, gliding; eyes closed; filling in Louis the Child’s dubstep with her breathy vocals in “It’s Strange.”

PVRIS hearkened Paramore’s early days, with an added bit of rock. Whereas she came solo last year, Tegan Quin brought along her twin and bandmate, Sara, to sing their poppiest tunes from Love You to Death and Heartthrob. At one point, a fan proposed to Sara, and both sisters jokingly reassured her that she didn’t want to be married to Sara given her eccentricities.

One of the biggest names of the festival was, of course, Kesha, who showed us the strength she has developed as a survivor in her own right with an unapologetic set comprised mostly of her biggest hits, circa early 2000s. “Woman” and “Praying” came from her new LP, Rainbow, and the latter performed live was just as tear-jerking and captivating as its studio version. 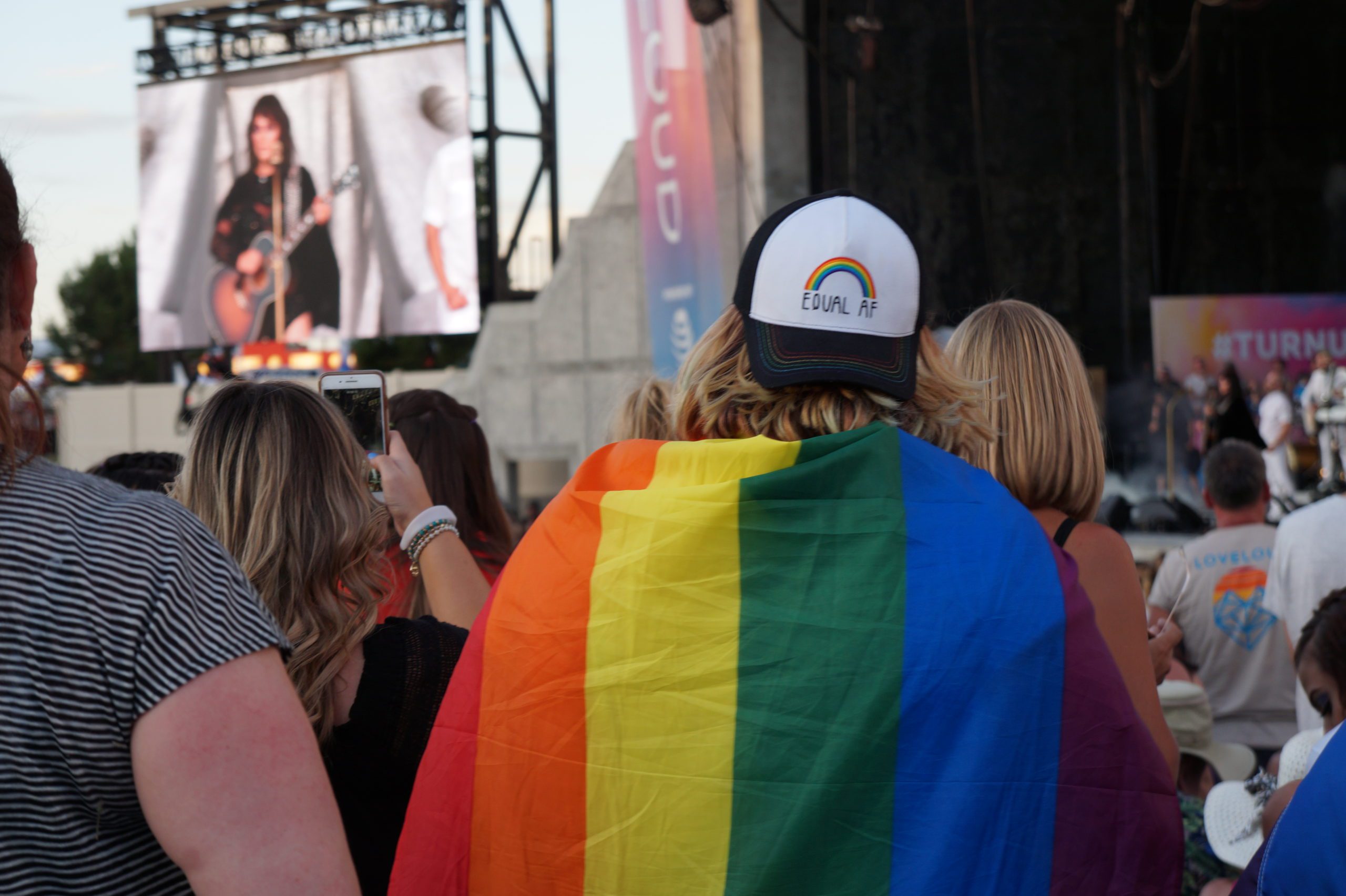 In a somber moment, she told us that “equality is my constitution,” and cited a key piece of advice that has been passed down to her: “Don’t wait to love yourself until fill in the blank. And it just struck me ‘cause I’m always that person that is feeling insecure. F*ck that, I’m gonna love myself right now. Because this is all we have. All I can say is, love is the f*ckin answer to everything; that’s all I know.” 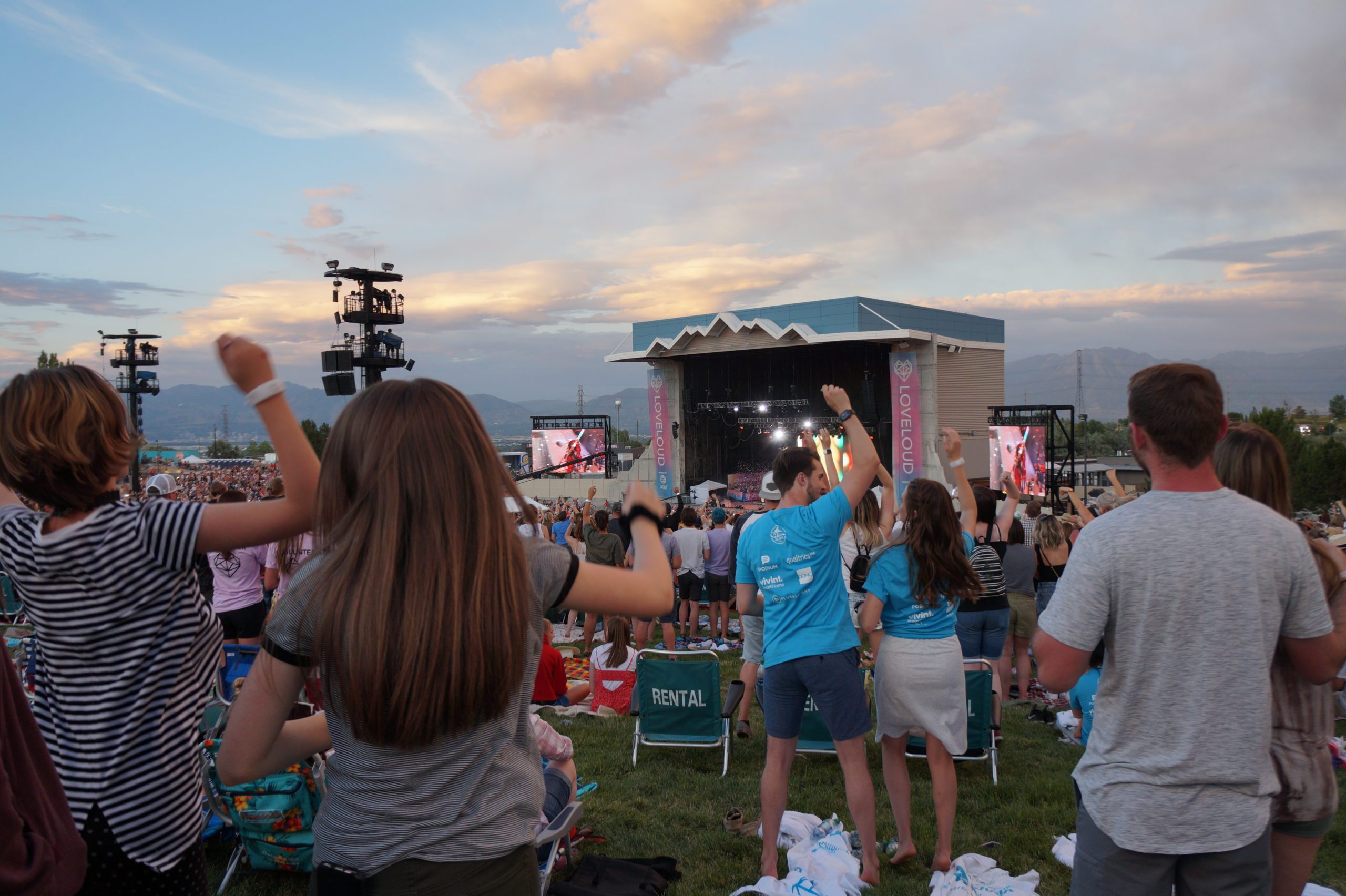 Prior to singing “Take it Off,” she invited anyone who was comfortable doing so to take off their clothes and toss them to her, so she could swing them around like a makeshift whip.

Later, when the sun set and the heat mercifully abated above Loveloud, Parkland shooting survivor and LGBTQ activist Emma Gonzalez helped throw back some of the bras onstage to their rightful owners. While performing this service, she read from her phone a speech directed at the young audience about why they should vote, and love themselves in spite of the tense political climate in which they currently find themselves. “I didn’t realize until after the shooting at our high school that I wasn’t just tired with school…I had capital D depression,” she admitted. To demonstrate how widespread mental illness is within the LGBTQ+ community, she asked everyone to “holler” if they had depression, anxiety, or PTSD, respectively – and in a painfully funny moment, each illness was met with cheers. 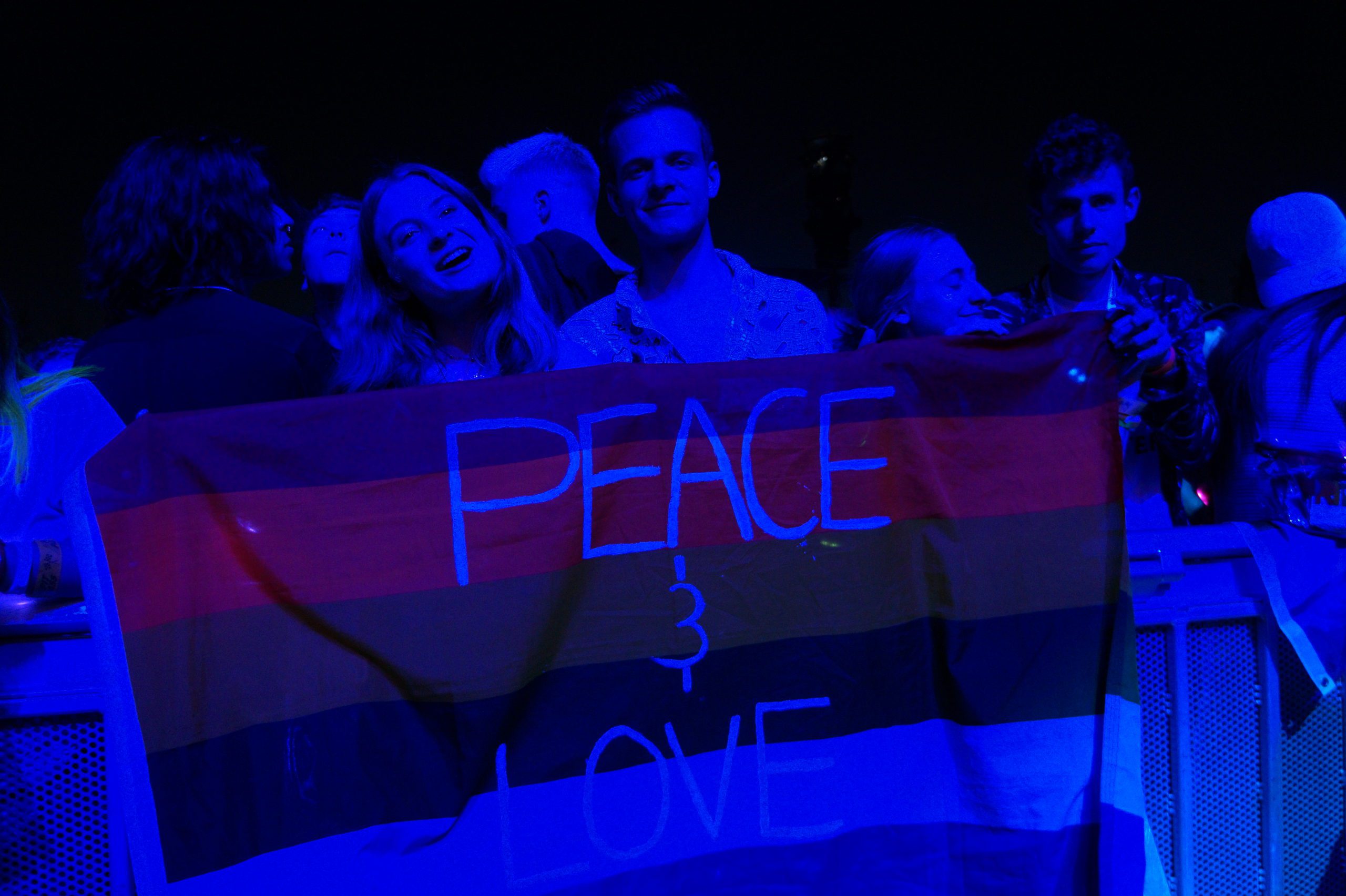 Gonzalez demanded social change in the form of pop culture, to boot telling the LOVELOUD crowd: “There should be more books and movies about LGBTQ+ kids of color that don’t carry the burden and fear that we face on a daily basis,” she says. “It’s good to have representation for people to see the things we go through, but it’s also good to have an escape from the crushing depression and anxiety.”

Reynolds capped off the night with a moving sermon, of sorts, that calls religious leaders and lawmakers to attend to the humanity of their LGBTQ+ constituents. In between singing Imagine Dragons hits from past and present on his own, he paused to implore youths to embrace who they are, and know that they had an ally in him. “There are people here tonight who have lived a life where they have not received equal love,” he says, as the keys to “It’s Time” swelled in the background. “It’s taken us decades to get to a point where we are finally starting to say, ‘You know, maybe the color of your skin shouldn’t matter.’ There’s still racism, but we’ve progressed. But oh my gosh, it’s taken decades of people who have stood up and fought.”

And, in true LOVELOUD fashion, he brought out a bright rainbow flag, and let the wind carry it into the atmosphere. At the same time, the rainbow confetti left from Kesha’s set swirled into the sky, making for the perfect snapshot of pride in action. 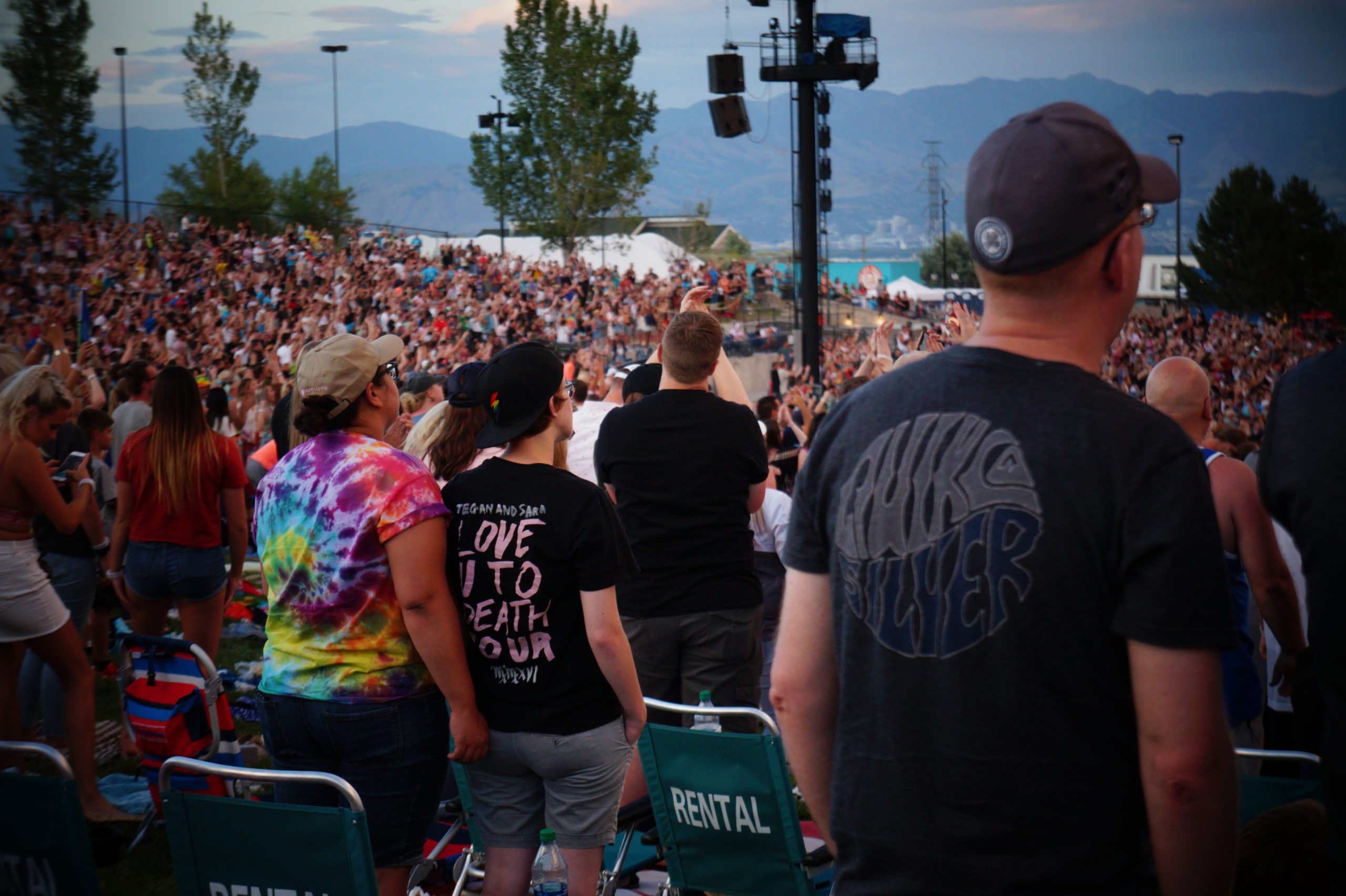 View more photos from the blue carpet and festival here.

To find out more about the LOVELOUD Foundation, go here. And go here to see all our music coverage.

Charissa Chehttps://saltlakemagazine.com
Charissa Che was born and raised in NYC and has been a journalist for over 12 years in news and arts and entertainment. She is a music contributor for Salt Lake Magazine. Additionally, she holds a Ph.D. candidate in Writing & Rhetoric at the University of Utah. She prides herself on following the best cat accounts on Instagram. Calicos preferred.
Previous article
It’s Tiki Drinks Tuesdays at Tinwell Bar
Next article
How to Survive a Snake Attack