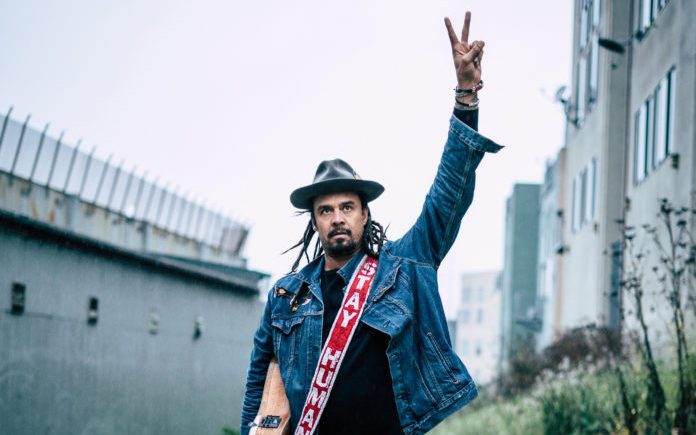 It is hard to believe that Michael Franti started his musical career opening for sonically and culturally abrasive artists like Nirvana and Public Enemy as one-half of the politically indignant punk-rap duo The Disposable Heroes of Hiphoprisy. It’s a surprising contrast with his current image as an unofficial patron saint of sunny, love-will-win platitudes. Skeptics shouldn’t be too quick to dismiss Michael Franti & Spearhead’s multicultural jam-pop as two-dimensional, though. The artist still breathes fire, but he’s built a more accessible platform for delivering his socially conscious message.

Franti is on tour in support of his new self-directed film Stay Human and its accompanying soundtrack album Stay Human 2. (The first Stay Human, released in 2000, was a well-received anti-death penalty concept album). The new documentary is a celebration of optimism, which as he explains it, “tells the stories of heroic everyday people who helped me to discover more deeply what it means to be and stay human.” Stay Human is Franti’s first film since 2005’s I Know I’m Not Alone, which documented Franti and friends uncovering the “human cost of war” in the war-torn neighborhoods of Baghdad, the West Bank and Gaza Strip.

Franti, 51, talked to Salt Lake magazine about his new projects and the hard work of avoiding cynicism.

Alex: I want to start off by asking about your new film, Stay Human. The central message of the film, and much of your work, is a call to reject apathy and embrace optimism. At a time when it feels like there’s so much bad news all the time, how do you stay tuned-in without experiencing news fatigue? How do you stay optimistic?

Michael: [Laughs] That is my daily battle. It’s the $64,000 question and it’s something that rocks my soul. I wake up, I kiss my wife and check my phone—and if I do it in the wrong order I’m in deep shit.

The truth is I’m afraid to look at my phone. The death of Anthony Bourdain crushed me. I considered him like a kindred spirit. He showed us the simplicity of food. He could sit down and show how important little things are for seeing culture and experiencing other cultures. He showed us humanity through food. I try to do the same thing with my music. He was really a beacon of hope—used humor, history and said it like it is.

And I just thought, if even he has succumbed to these pressures and—well, checked out. That doesn’t speak highly for the rest of us.

Michael: I’ve battled depression and anxiety for decades, but I’ve found that if I can change my thoughts, if I can change the way I feel—it’s like a muffle you have to develop. You know, Steph Curry hits these amazing three-pointers and he has to practice all the time so he can make those great shots. Optimism is the same thing. We need people who act that same way, who are strong and can look at whatever situation arises and respond to it, who can turn bad things into opportunities.

Alex: I have a great deal of respect for the original Stay Human, especially for tackling a subject as volatile as the death penalty. Is Stay Human 2 inspired by a specific human rights issue as well? What inspired you to make a sequel to that album?

Michael: As I made this film, I saw how people hold on to their humanity even under great duress. The question of staying human feels more important than ever—even more so than when I made the first album. So we made some really spiritual, really soulful songs. A lot of songs to celebrate life, to party, to raise our voice, to support our families and to laugh. It’s a combination of all these things on this record.

Alex: In 2005, you released the powerful I Know I’m Not Alone, which was very lo-fi and do-it-yourself in terms of production. How did it feel to make Stay Human with a professional crew? Did that remove any of the immediacy or intimacy that you experienced making I Know I’m Not Alone?

Michael: When we made I Know I’m Not Alone, it was just my friends and I talking to people in Iraq. We didn’t think it was going to be a movie, but we had all this powerful footage of us connecting with people amidst a war. We thought, let’s show this to people.

This new film, we weren’t trying to make a documentary either. We were just making a music video in Indonesia with my friend John Roderick. We wanted to include this five-minute interview at the end, and then that turned into five years of interviewing people and it became this powerful project. Y’know, Roderick is used to filming people from helicopters, filming snowboarders. So he provided these great-quality shots.

Alex: I noticed on social media that you have encouraged fans to wear jackets or T-shirts reading “I Really Do Care! Do You?” What value is there in re-appropriating negative or callous messages like that?

Michael: Yeah, I do think it’s important. This goes back to what we were talking about earlier. How do we take these negative situations and transform them into positives? You know my wife is seven-months pregnant. We’re expecting a child and the other day we’re sitting in bed, watching videos of these detention centers, and I thought, ‘What if we lived in the wrong place, and what if we were so poor that we had to walk hundreds of miles to reach a border, only to be detained and lose our child?”

My ancestors are Irish, German and Belgian on my mother’s side, and I think about when they made the trip to this country.

And my father’s ancestors are Black and Native American. In the mid-1700’s, his ancestors came here even before this was the U.S., and his other ancestors had been here for, well, thousands of years.

For me to know that any of them may have been separated from their families during their journeys, it’s devastating.

So to see that jacket—and who knows why Melania wore it—it’s not something someone, and especially an elected leader, should wear.

“I don’t care” is unacceptable. We know we do have to care about our economy, immigrants, the vets and everything else. We can have different opinions, and I’ll have that conversation. We can even have arguments and that’s fine. But “I don’t care” is not an option.

Alex Murphyhttps://www.saltlakemagazine.com/
Alex Murphy is a writer and public relations professional with nearly a decade of experience with music in Nashville and Salt Lake City. He grew up in a record store and owns a cattle dog named after jazz icon Charles Mingus. Alex hasn't decided whether he likes music or not.
Previous article
Furthur (and I meant to spell it that way) adventures at wine camp: Bucklin Old Hill Ranch
Next article
Concert Preview: Fantastic Negrito at Urban Lounge