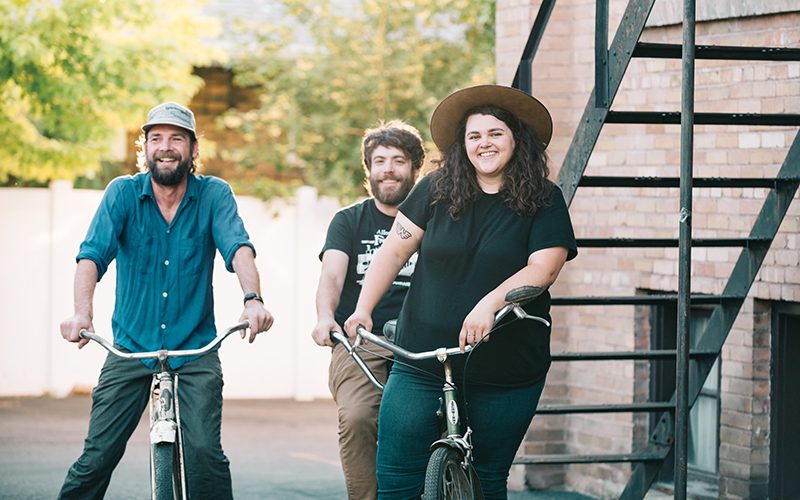 Michelle Moonshine and the Music that Saved Her

Michelle Moonshine didn’t know she was a musician—she thought she just liked music. “When I was 16, I went to a music festival and met a bunch of people like Tony Holiday and Talia Keys,” she says. “I was like, ‘Wow.’ It was the first time I’d ever seen real live music, so after that I would sneak into Hog Wallow to see their shows, then I started hanging out with Tony Holiday and watching him play all the time and I started playing guitar and singing.”

It turned out, she’s a bit of a prodigy. She started sneaking into the bar around October and picked up a guitar for the first time in December. She had her first gig on St. Patrick’s day a few months later. And not long after that, she was on tour with Holiday.

Moonshine has been a working musician for eight years—she  quit her last 9-5 job to pursue music full-time the week she found out she was expecting a child four years ago. “I played the whole time I was pregnant,” she told Salt Lake magazine, as her son sat beside her watching cartoons on her iPhone. “I played until December and I had him on January first. I had a big belly and a guitar and he would just kick and kick and kick.” Her music still bonds them, she says. “If he doesn’t like what I’m listening to he tells me to ‘Play a mommy song’—he wants to listen to my music all the time.”

It’s hard to describe Moonshine. Her voice is equal parts Gillian Welch and Alison Krauss. Even Moonshine isn’t sure how to explain it. “I used to say honky-tonk but without a drummer we’re not that,” she says. “I say Americana now. It’s blend of everything. It’s super safe.”

What she and her bandmates—guitarist John Davis and bassist Bronk Onion round out the trio—lack in drummers, they make up for in songwriting. They primarily perform original tunes, though, she says they don’t rule out covers. “I’ll ask for a list of ten songs from people and if I like the tune I’ll learn it and then I know it forever,” she explains. “We even did Beyonce for someone walking down the aisle at a wedding once.”

“It just makes sense to me,” she says of her music. “It’s kind of crazy how everything came together. All my friends were doing a lot of drugs—two of them died and a bunch went to rehab. I was in the same boat and then I started playing music. Music saved me for sure. It’s an obsession.”

See all of our Salt Lake Magazine’s Small Lake City Concert Series. Each issue we feature a local artist performing an original song and one of their favorite cover.

Christie Marcyhttps://www.saltlakemagazine.com/
Christie Marcy is a former managing editor at Salt Lake magazine. Though she writes about everything, she has a particular interest in arts and culture in Utah. In the summer months, you will find her at any given outdoor concert on any given night. In the winter, you will find her wishing for summer. Follow her on social media at @whynotboth.
Previous article
Unlikely Environmental Advocate Rob Bishop Moves to Protect Public Lands
Next article
Influential Women In Business: McKenzie Rockwood