“A crescent shadow starts eating away the sun, but nothing spectacular happens for quite awhile. Then, just as the eclipse is about to begin, the sky darkens like twilight, birds stop singing and get ready to roost—they think night is coming. A shadow comes rushing across the landscape and when you look up, it’s like a science fiction film: The sun is a black disk with filmy spooky light streaming out from it. It’s dark in the middle of the day—almost a sacred feeling.” Joe Bauman, a retired journalist, writer and local amateur astronomer, describes the first eclipse he witnessed. Since then, he has experienced four more.

On August 21 the sun will disappear from the sky in much of the country during the first total eclipse of the sun in 38 years—the first to cross the United States since 1918. The swath of total shadow will run diagonally from Oregon, where the sun will rise while totally eclipsed, southeast to Georgia. The whole event will affect the U.S. for only about an hour and a half; at the center line of the path, the sun will be dark for about two minutes.

People travel from all over the world to view an eclipse, gambling that the weather will be clear enough to actually see it. In Hawaii in 1991, eclipse tourists only saw the clouds get darker.

Utahns don’t have far to travel to not see the sun this August: Parts of Idaho, Wyoming and Oregon are all within the 70-mile-wide path of totality. In Salt Lake City itself, the eclipse will be 91 percent total. “But a partial eclipse is nothing like a total eclipse,” says Bauman. “It’s one of the most beautiful things you can see in Nature.”

For more information go to eclipse2017.org. 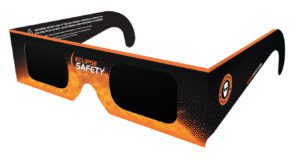 Bauman has some tips for viewing the great absence.

– Give yourself plenty of time to get there—traffic could keep you from seeing the phenomenon. You don’t want to be sitting in your car when the sun goes dark.

– Don’t ever look at eclipse with your naked eye until totality—it can damage your eyes. Wear eclipse glasses or use a pinhole viewer.

– If you don’t have a filter, don’t take a photograph until it’s total.

– Look away instantly when you see the “diamond ring” effect as the eclipse is ending. That’s the brilliant light flash as the sun’s corona is uncovered.

– Most importantly, don’t lose the wonder of the moment in the recording of it.

Mary Brown Maloufhttps://www.saltlakemagazine.com/
Mary Brown Malouf is the late Executive Editor of Salt Lake magazine and Utah's expert on local food and dining. She still does not, however, know how to make a decent cup of coffee.
Previous article
Eclipse: the Sounds of Darkness
Next article
Jann Haworth's March at Modern West Fine Art