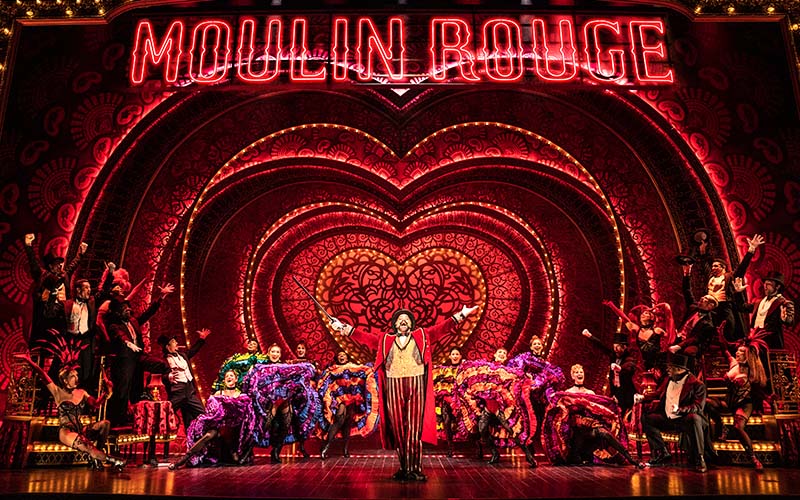 Moulin Rouge! The Musical Dazzles at the Eccles

The Moulin Rouge is open for business at the Eccles Theater. The Broadway reboot of the 2001 film starring Ewan McGregor and Nicole Kidman opened last weekend and will play through Dec. 11, 2022. Judging from the packed house on Friday night, this is the season’s hot ticket.

The film is universally beloved and was natural to recreate in a theatrical setting. It is, after all, set at one of the world’s most famous performance halls, the eponymous Moulin Rouge where the Parisian upper crust slummed with Bohemian artists in Paris’ Montmartre District. But just because something can-can be done doesn’t mean it should-should. The original was a love song to pop legends delivered through director Baz Luhrmann’s MTV-ready lens. The Broadway version seems to think that the songs Luhrmann originally lionized are as interchangeable as singers in a K-pop band. Maybe they are. But die-hard fans of the film who are expecting a note-for-note retread are in for a surprise.

The play follows the story of Christian (Conor Ryan), a cock-eyed optimist, who arrives in Paris to seek his fortune and is drawn into the world of the Moulin Rouge by the artist Henri de Toulouse-Lautrec, played by André Ward, whose paintings and playbills romanticized and ultimately created the lasting legend of the Moulin Rouge. In a case of mistaken identity, Christian is set up with the Moulin Rouge’s headlining courtesan, Satine, “the Shimmering Diamond” (Courtney Reed). The set-up, however, was intended for the rich and powerful Duke of Montroth (David Harris) whom the Moulin Rouge’s ringleader, Harold Zidler (Austin Durrant) has pinned hopes for the theater’s survival on. So there’s the love triangle. Of course, Satine and Christian fall madly in love thanks to Elton John and Bernie Taupin’s “Your Song,” which is thankfully preserved on the stage.

The Broadway version subs in newer pop anthems and power ballads throughout. A neat trick that the audience seemed to enjoy. It was like a game of name that tune. Trickles of applause came forth as soon as the crowd was able to guess “Rolling in the Deep” by Adele or “Raise Your Glass” by Pink had been swapped in. However, the substance of the changed songs has the effect of changing the plot and characters’ motivations. Still, the cast gamely ensures the show goes on. The production’s two standouts are Austin Durrant and André Ward as Ziller and LaTrec. They provided the bombast and power to back up the show’s true star: The production itself. The set is dazzling, to say the least, and lives up to all the myth and magic of the Moulin Rouge. This, however, has the effect of weighing down the other principles Conor Ryan and Courtney Reed as they live out their character’s love affair. Sorry kids it’s hard to compete with the sheer theatricality of this production.

No matter. The crowd ate it all up. This, after all, was supposed to be a spectacle and it certainly was. Although much of the movie’s charm is lost in translation, the pomp and sheer over-the-top daring-do remain intact and that is worth a night at the Eccles.

Moulin Rouge! The Musical runs through Dec. 11. 2022. For Tickets and information visit arttix.org.

Jeremy Pughhttps://www.saltlakemagazine.com/
Jeremy Pugh is Salt Lake magazine's Editor. He covers culture, history, the outdoors and whatever needs a look. Jeremy is also the author of the book "100 Things to Do in Salt Lake City Before You Die" and the co-author of the history, culture and urban legend guidebook "Secret Salt Lake."
Previous article
Spanish-Inspired Cuisine at Mar | Muntanya
Next article
Review: July Talk and Darkbird Rock Urban Lounge