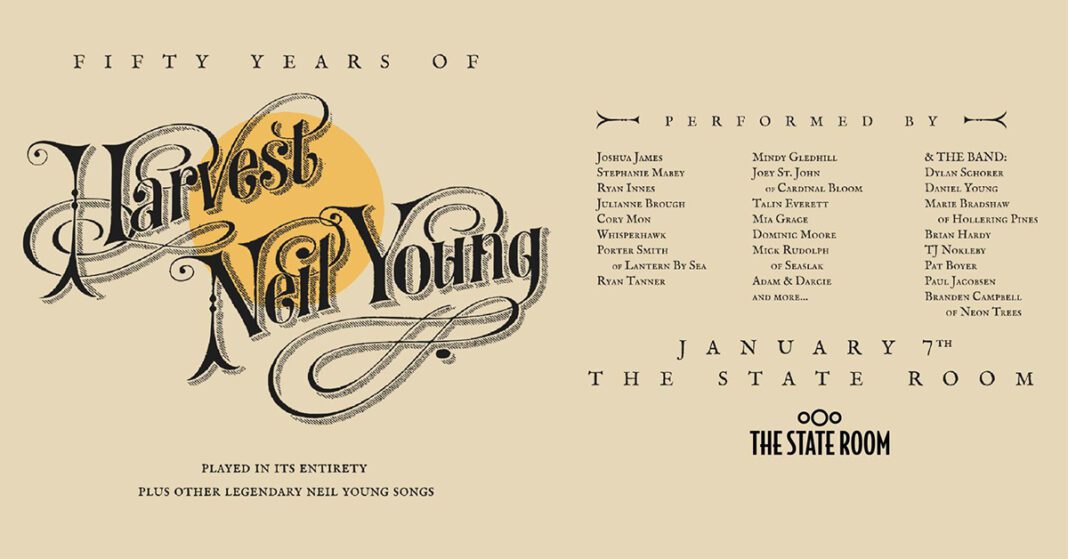 The State Room hosted a fruitful Harvest in a sold-out show on Saturday night. Singer-songwriter Paul Jacobsen served as master of ceremonies (and more) ushering in a bounty of talented, local artists to pay tribute to Neil Young’s influential 1972 album. It was a massive, three-part-24-song-musical feast that thrilled the jam-packed audience (ok, I’m done with the produce metaphors). With so many talented, local artists it’s impossible to highlight the standout performances. So, here’s the setlist.

Act One included a handful of Young’s non-Harvest treasures like “Only Love Can Break Your Heart” performed by Provo pop-duo Adam and Darcie. Daniel Young, who kept the ensemble on time all night with his skillful drumming, took lead vocals on a fine rendition of “From Hank to Hendrix” accompanied by Dylan Schorer on pedal steel, M. Horton Smith on guitar, and Julieanne Brough on keys. Hollering Pines lead singer and songwriter Marie Bradshaw rocked “Harvest Moon” while also providing backup vocals throughout the evening. American Songwriter contest winner Ryan Tanner took the keys and wrapped up Act One with a superb rendition of “After the Gold Rush.”

Act Two of this star-studded performance featured Harvest in its entirety with Paul Jacobsen skillfully launching the first track “Out on the Weekend.” An assembly of other great players subbed in and out all night, but the foundation of the evening’s host band included Paul Jacobsen on acoustic guitar, Daniel Young on drums, Pat Boyer (Desert Noises) on bass and occasionally shredding a mean lead guitar, TJ Nokleby (Parlor Hawk) on guitar, Brian Hardy (The Lower Lights) on keys, Marie Bradshaw on backing vocals, Dylan Schorer (Hollering Pines) on pedal steel and Megan Nay (Fire Guild) on fiddle.

Provo’s Mia Grace “filled our cup” with “Harvest,” the album’s title track. The next song from the album reminded us that in 1972 even hippy folk artists, marching for peace and justice, could be tone deaf to misogyny. “A Man Needs a Maid,” is a cringeworthy song title that went unchallenged fifty years ago. On Saturday night however, Julianne Brough tackled the song from a female perspective and turned it inside out with her poignantly beautiful rendition. Her reinterpretation was a true highlight in an evening full of high art.

Porter Smith of the indie rock band Lantern By Sea shined on “Heart of Gold.” Cory Mon delivered an upbeat “Are You Ready for the Country” before handing it off to Kimball Frank for a heartfelt singalong with “Old Man.” Stephanie Mabey brought us back to the album’s  orchestral folkiness with an ethereal “There’s a World.” Dr. Dominic Moore took us on an electrified trip to a subterranean world with the rafter-shaking “Alabama.” Sadly, that powerful song still rings true.

The full stage momentarily cleared and Joshua James came out with his guitar and did an amazing (you could hear a pin drop) rendition of  “Needle and the Damage Done.” Cardinal Bloom’s Joey St. John offered his last “Words” to the show’s loving rendition of Harvest.

A short intermission gave way to Act Three: A final round of Young’s classics. Whisperhawk (Michael Gross) launched into a thunderous “Cinnamon Girl.” Michelle Moonshine did a lovely “Comes a Time” with Marie Bradshaw on backup vocals. To see both singers/songwriters on stage together was a treat. Bradshaw then took us on a musical ride somewhere on a desert highway with “Unknown Legend.” Ryan Innes (NBC’s The Voice) belted out a soulful “Helpless” and left us wanting more. Neon Trees bassist Branden Campbell joined the ensemble and Porter Smith returned for a lively version of  “Ohio.” M. Horton Smith (Hollering Pines) set his mandolin aside and took lead vocals on “Farmer John.” Mick Rudolph (Seaslak) jammed out a mesmerizing and dreamy “Cortez the Killer” before Joshua James pulled the trigger on “Powderfinger.” The stage filled for the group finale with “Rockin’ in the Free World.”

Let me catch my breath. This show could have easily sold-out a second night (I’d actually go see it again). I hope the success of this event will generate renewed interest in this type of collaborative celebration. We could use more performances that showcase our locally-based talent. Next time, I’d like to see merch tables so fans can purchase the great original music many of these artists have recorded.

I apologize for failing to mention any of the many players who contributed so much to make the evening a success.

Who: An all-star lineup of locally-based artists

Where: The State Room