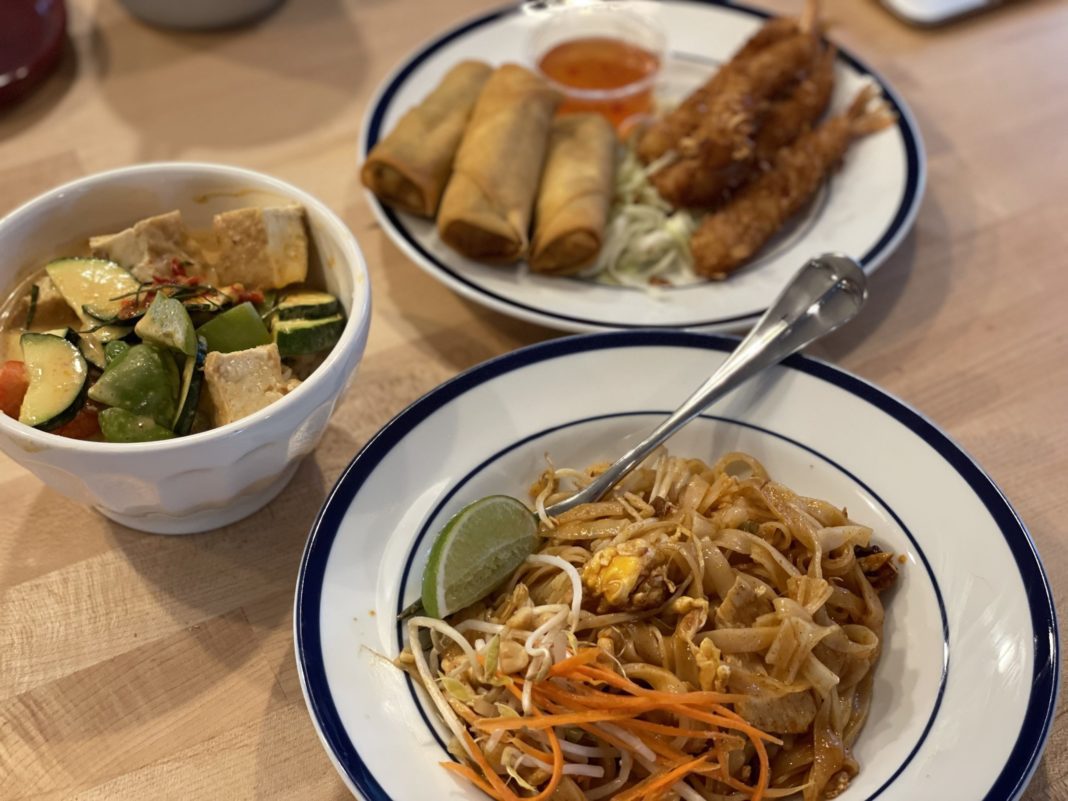 The two Thai restaurants are a mere .3 miles apart, but even that measure exaggerates the true distance—a few hundred feet as the crow flies—owing to Kimball Junction’s labyrinthine layout. A pair of restaurants serving Thai cuisine in Snyderville Basin would have been unthinkable not long ago where the food scene was dominated by ubiquitous chains like Café Rio and Jimmy Johns, but a shift in Park City’s dining scene is changing expectations. High-end boutique dining and uninspiring chains have long been well represented, but the massive middle encompassing a huge array of cultures, tastes and price points is finally getting the opportunity to make its mark.

Taste of Thai, the latest example of this dining evolution, opened its doors in late May 2021. While a single restaurant opening seems perhaps unremarkable on its face, this particular instance is a great sign of a healthy dining ecosystem. It’s close proximity to Thai So Good, another Thai restaurant which opened roughly 18 months ago, is a feature not a bug. Restaurants appearing to be competitors tend to thrive in each other’s presence, helping create a more vibrant community welcoming further restaurant launches.

That’s exactly what’s happening in Kimball Junction, which is quickly establishing itself as the central dining hub for the greater Park City area as both locals and visitors are priced out of Old Town and its immediate environs. In addition to Taste of Thai and Thai So Good, numerous other independently owned restaurants have made their mark. From the inspired Jamaican cuisine of 11 Hauz to the Mediterranean-influenced fast casual fare at Vessel Kitchen to the intimate Italian dining at Cortona, the area is beginning to boast a legitimately delicious variety of food that isn’t your standard resort-town fare. These aren’t high priced steak house analogs serving elk shank to match the mountain setting—they’re locally-owned restaurants bringing a legitimate cultural depth to a dining culture that’s beginning to mirror the adventurous and varied scene found in Salt Lake City.

We’ve spilled a fair amount of ink, both actual and digital, on many of these restaurants, but what about the newcomer, Taste of Thai? The first impressions have been great. The Panang curry I had was terrific, as was the coconut shrimp appetizer. Their online ordering was incredibly intuitive and easy to use, allowing me to choose a specific pick-up time and pay online. The only disappointment? The vibrant interior made me wish I’d chosen to eat in rather than carry out. In all, it’s an excellent addition to the dining scene on a burgeoning restaurant row in Kimball Junction that already includes 11 Hauz, Maxwells, Hearth and Hill and Bartolo’s.

Real food made by and for real people is proliferating in Snyderville Basin. Yes, there’s still a bit of a Park City surcharge compared to what you’ll find in the Salt Lake Valley, but absent are the eye-watering prices and peak season crowds found on Main Street. Independent restauranteurs are redefining what mountain town dining is in Park City, and the community is better for it.

Stay up-to-date on our favorite restaurants as we get back to dining out this year.

Tony Gillhttps://www.saltlakemagazine.com/
Tony Gill is the outdoor and Park City editor for Salt Lake Magazine and previously toiled as editor-in-chief of Telemark Skier Magazine. Most of his time ignoring emails is spent aboard an under-geared single-speed on the trails above his home.
Previous article
5 Summer Market Must-Stops
Next article
Tools of the Trade: Home Bar Essentials