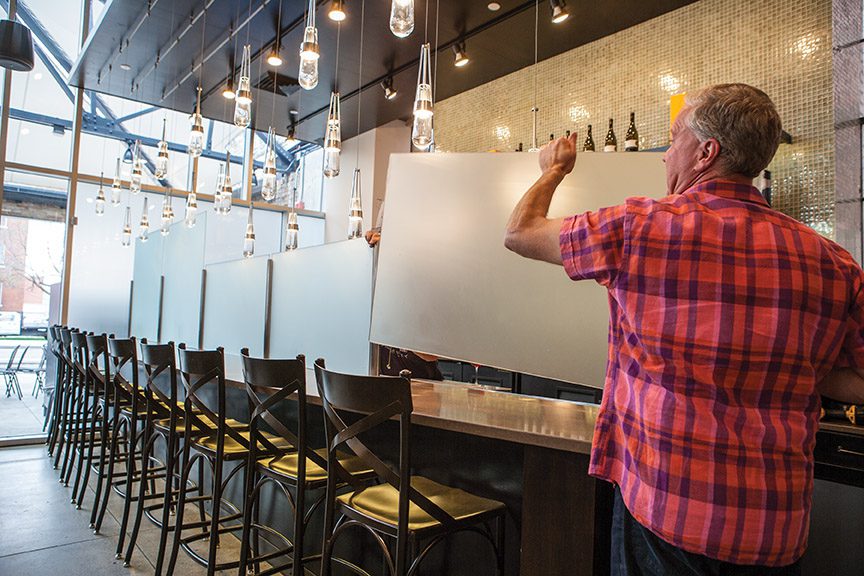 One of the most surprising things about Utah’s revamp of its liquor laws is the way it brought citizens together and drove them apart. The attempt to remove the embarrassing Zion Curtain pitted restaurant groups, which supported the law, against some of the groups’ members whose livelihood is threatened by the colateral damage of the new law.

Yet, a near miracle also occurred when many bar, restaurant and dining club owners found themselves allied against the new law (HB442) with moral crusader Gayle Ruzicka. “I never thought I’d find myself and Gayle Ruzicka on the same side of anything,” says Tim Ryan, owner of the Utah-based chain of sports pubs ‘Bout Time. “We both think this is a bad law, though for different reasons.”

Ruzicka laughs hearing Ryan’s comment. “I’m glad to give people the experience of being on the right side of things.”

Ryan opposes the law because it could force him to close some of his pubs where he now has to choose between a bar license or a restaurant license. His pubs now operate under a soon-to-be-eliminated “dining club” license that entirely bans children from the premises, but relieves him from meeting a steep 70 percent food/30 percent booze revenue split. If forced to operate as “restaurants,” his pubs won’t be able to meet the booze cutoff, he says. They could survive under the new “bar” license, but three locations are blocked from going that route because landlords or local zoning prohibit bars. “They’ll have to close their doors,” Ryan says. Bar owners and alert consumers are also dismayed by the markup hike on liquor buried in the bill that will make booze prices in Utah among the highest in the nation.

Ruzicka, on the other hand, opposed HB422 because she believes the Zion Curtain barrier is essential to fighting teen drinking and alcoholism. “Seeing drinks being made is very enticing to children,” she says. “Everyone talks about the tourism money that will be lost. The issue should be about protecting children. Who knows? Maybe more tourists will come because our highways are safe.”

In the end, neither Ruzicka nor the bar owners or the restaurant groups got what they wanted. HB422 did not bring down the Zion Curtain—it added options. Now, a restaurant serving alcohol can choose a Zion Curtain or a 10-foot “Zion Moat” that separates minors from the bar, or a “Zion Fence,” a 42-inch-high railing placed five feet from the bar. (Sorry Gayle, the latter two options allow children to see drinks being made.)

Then out of left field, the Legislature passed a separate law, HB155, that Gov. Herbert signed into law over the desperate pleas of the hospitality industry. HB155 reduces the blood-alcohol level for a DUI arrest from 0.08 to 0.05 percent. Instead of removing the Zion Curtain and the embarrassing and business-destructive message it sent, Utah now has three “Zion” barriers and is being publicized worldwide for having the strictest BAC in the U.S. As the American Beverage Institute mocked in Salt Lake newspaper ads: “Utah: Come for vacation, leave on probation.”

How did it go so wrong? The battle over liquor law changes proved to the world, once again, that Utah is a theocracy. As much as GOP lawmakers and Ruzicka deny it, the Mormon Church had a huge influence in the law’s language and its passage. Even as the Legislature and governor pretend they are fighting the evil of alcohol with inane regulations, they cynically delight in its $400 million in tax revenue.

Insiders say the law was allowed to go forward because LDS Church PR hated the nickname “Zion Curtain,” fearing it made their religion sound repressive. Their sensitivity was seen at the House Business and Labor Committee hearing when a bar owner referred to the wall as the “Mormon Curtain.” Though many lawmakers were incensed, the bar owner defiantly said, “Call it what it is.”

The irony is that probably even LDS Church PR types are frustrated with the new laws. The three “Zion” barriers and the lowered blood-alcohol level just reinforce world-wide branding that Utah is a puritanical, theocratic no-fun zone.

Photo above: Joel LaSalle, president of LaSalle Restaurant Group, prepares for the removal of the Zion Curtain at Current Fish & Oyster. It will be replaced with a Zion Moat under revamped liquor laws.

Glen Warcholhttp://www.saltlakemagazine.com
The late, great Glen Warchol passed away in 2018. His last billet was on the editorial staff here at Salt Lake magazine but his storied career included stops at The Salt Lake Tribune, The Desert News, The New Times and others. His stories haunt this website like ghosts in a machine and we're always happy to see them. RIP Papa Warchol.
Previous article
Newcomer: Immediate Amore at Fireside on Regent
Next article
Park City Life: Park City’s local food scene is thriving off Main Street.