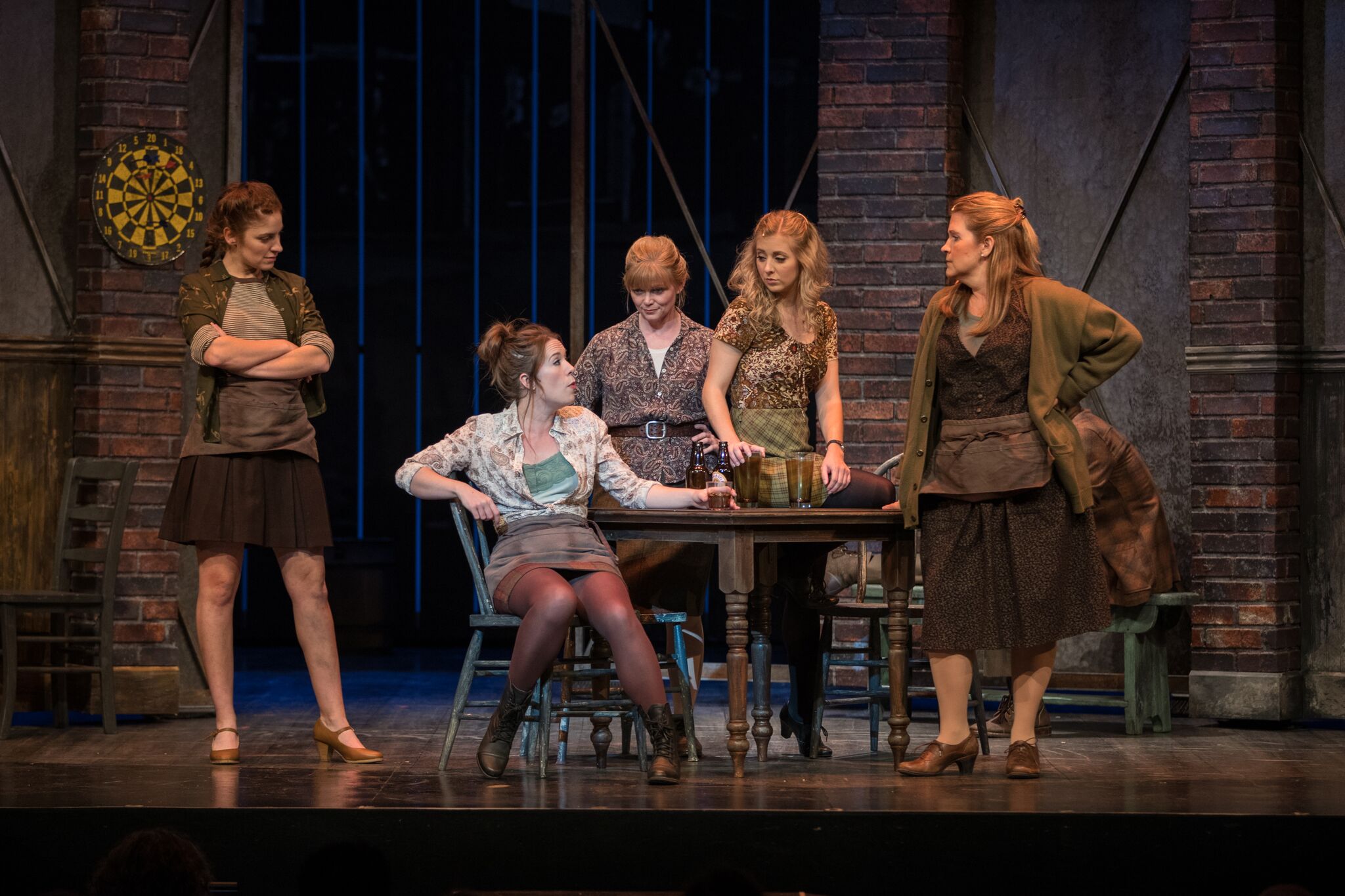 Open up the Soul Cages

The smell of brine and the crisp chirp of sea birds sail into town with The Last Ship, which made its regional-theater debut on the Pioneer Memorial Theatre stage Sept. 16. The play, a passion project for the rock, jazz, legend Sting, closed on Broadway in early 2015 after a critically-acclaimed but lackluster run. Sting’s semi-autobiographical, and somewhat-based-on-true events tale of a Quixotic effort by unemployed shipyard workers to build one last ship, was in dry dock until PMT’s artistic director Karen Azenberg coaxed Sting and his producers into giving her permission to stage it at PMT.

Half labor uprising and half love triangle, the play is often odds with what it wants to be—a human-sized tale of love lost, then found and then lost again or a polemic about the worker’s struggle against the monolithic global economy wrecking a way of life in industrial England circa 1993.

The smaller tale of the two introduces us to young Gideon Fletcher (Seth Pike) who runs away from the life of a shipyard worker as dictated by his abusive father Joe Fletcher (William Mulligan), leaving behind his sweetheart, 15-year-old Meg Dawson (Bailee Johnson) with a promise of return. Fifteen years too late for those sweet nothings to mean anything, older Gideon (Bryant Martin) returns home to bury his father and to confront the ghosts and those he left behind, i.e. an older, wiser Meg (Ruthie Stephens). Meanwhile, the men folk of the town led by former shipyard foreman Jackie White (Dan Sharkey) are facing the sharp end of the collapse of the ship-building trade in post-Thatcher England, unemployed and grumbling in the pub, until the town’s irreverent priest challenges them to rise up and occupy the shipyard to build one last ship.

Sting fans will recognize a few of his hits sprinkled into the libretto (“All This Time” and “When We Dance” for example) as well his ambitious and sure-handed compositions that are not shy about heading into little used and weird places in the tonal scale. It sounds like Sting and that’s a good thing. You can hear the little flourishes and accents that go all the way back to Dream of the Blue Turtles which is undeniably cool. But the numbers devoted to the workers casting off the chains that bind weigh the whole play down, like, yes, an anchor. These guys roll out a range of emotion that starts at grim, moves on to dour then ramps up to angry and resolute, pauses at strident and then tops out at Dropkick Murphy.

Spoiler alert. They build the ship.

What saves the day and reminds us that this isn’t a column in the Daily Worker, is the women. Their stories lift the play out of the brine and set it soaring. Take for example, Peggy White (Anne Tolpegin), the long-suffering foreman’s wife. Tolpegin’s voice caused the audience to sit up straight the first time she belted out a line and her solo, “Sail Away,” nearly brought the crowd to its feet. Her supporting character stands in for all the town women who suffer alongside their husbands. But where the husbands have lost work, these women have lost their actual husbands, who have grown dim and vacant as they struggle with obsolescence. It is her kick in the pants and real talk that drives Jackie and the men to the barricades, if only to get him out of her hair.

So too with Meg, Gideon’s jilted girlfriend who is anything but jilted—she’s angry. This dude left her 15 years ago and then swaggers back into town expecting to pick up where he left off? Oh no he didn’t. Stephens gives a grand performance as a woman who has had quite enough of the fragile little male egos around her.

And poor Gideon. Martin has his hands full with this chump. First, the part is too low for Martin’s voice. It wasn’t until the final act, when Gideon steals a kiss with Meg and shoots up into an angelic falsetto that I figured this out. It certainly left us wanting more of Gideon’s softer (higher-pitched) side. Character wise, Martin gamely works with what he’s given but it’s tough to understand the motivation behind anything Gideon does. He just does it because that’s what the story needs. He blows around dutifully getting sad and angry but why? I’m not even sure he knew how to sail a boat there at the end but there he was up on the bow.

So what to think? The Last Ship is interesting, it’s solid, workmanlike (literally). The staging is well-done. The set is delightfully agile, with huge panels flying in and wheeling about seemingly without effort. The storming of the shipyard, for example, at the end of act one was quite a display of stagecraft and the entire production is seen through with a steady hand. It’s a serious play, about serious things and that’s a good thing in a theater landscape littered with unbridled enthusiasm and fairy tales.

Only, well, Always with the ship, that bloody ship. By the end of the play I didn’t care if it sank or sailed off the edge of the Earth.

The play really thrives in the human stories of Gideon, Meg and her clearly awesome steady guy Arthur Millburn (also appearing as the play’s corporate sellout strawman). And as much as I’ve poo-pooed Gideon’s character, the stuff about his father, the graveside moments are played to somber success by Martin. The whole shebang is at its best when it’s exploring the other lives of its shipyard men. And, thank God for Father James O’Brian. Played ably and gleefully, by John Jellison. It was the cleric’s cheeky pot stirring and rabble rousing, along with the play’s feminine side that, in the final assessment, won me over. I walked out of this play, tired of steel ships and fellers in hardhats, but still whistling “All this Time,” all the way home.

The Last Ship opened on Sept. 16 and runs through Oct. 1, 2016 at Pioneer Memorial Theater. Tickets and information here.

Jeremy Pughhttps://www.saltlakemagazine.com/
Jeremy Pugh is Salt Lake magazine's Editor. He covers culture, history, the outdoors and whatever needs a look. Jeremy is also the author of the book "100 Things to Do in Salt Lake City Before You Die" and the co-author of the history, culture and urban legend guidebook "Secret Salt Lake."
Previous article
Preview: Tears for Fears at Red Butte
Next article
House of Apocalypse Gala celebrates the end of the world