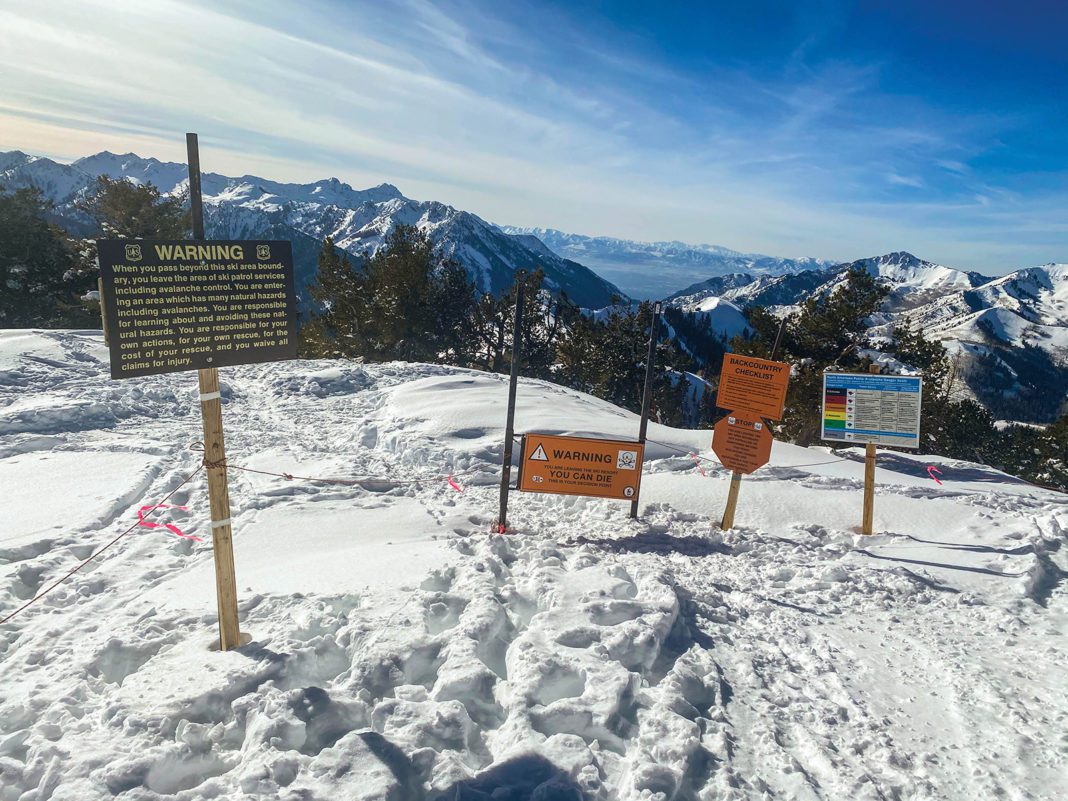 If the skull and crossbones weren’t ominous enough, the all caps “YOU CAN DIE” was meant to be. The warning—printed on the orange gate separating avalanche-controlled terrain within Park City Mountain boundaries from uncontrolled backcountry terrain on adjacent forest service land—is a blunt statement about the hazards of skiing and snowboarding in the backcountry, especially for those without the requisite knowledge and equipment. The appeal of untracked powder leads many, heedless of caution, to head out anyway, and, after two fatal avalanches just weeks apart in January 2021, Park City indefinitely closed backcountry access gates at the resort. The popular gate atop the Ninety-Nine 90 Express chairlift remains permanently closed, though the gate atop the Peak 5 chair will reopen.

The move irked some backcountry skiers and riders who had long used the resort’s chairs to chase untracked powder just beyond the ropes. Others felt the move was warranted, as throngs of unprepared people having easy access to avalanche terrain—in full view of and just steps from the chairlift—seemed a recipe for disaster.

“We have made the decision to reopen the resort exit on Peak 5 for backcountry access, and to permanently close the exit at the top of Ninety-Nine 90. While both exits access the same area, the Peak 5 exit requires more hike-to effort, preparation and intention to reach the terrain,” Park City Mountain COO Mike Goar said in a prepared statement released in August.

The issue came to a head during a particularly tragic avalanche season in Utah that saw six skiers and snowboarders killed, including two along the Park City ridgeline after exiting the Ninety-Nine 90 gate. The snowpack’s persistent instability was cited as a cause, but, even in years without compounding stability issues, accidents happen. There have been nine fatalities along the Park City ridgeline since 2000, and ease of access is almost certainly a contributing factor. Significant avalanche paths are mere steps away from the top of the Ninety-Nine 90 chair. Many lead directly back into the resort, doubling down on the convenience. From Peak 5, accessing the ridgeline requires using specialized climbing skins, or a superhuman appetite for nightmarish postholing up hundreds of vertical feet of snow.

“The Peak 5 gate encourages more responsible use both because of the increased effort it requires and the lack of a visual from the gate itself to the terrain it accesses,” says Chris Tolli, a longtime backcountry skier who frequents the Park City ridgeline. The change isn’t a panacea, however. “There’s still a lot of avalanche terrain people can get themselves into quickly,” warns a Park City ski patroller who spoke about the topic on condition of anonymity. “Often all it takes is seeing someone go through the gate and people will get excited to follow.”

Backcountry skiing and riding carry inherent risk, and eliminating every accident is impossible. But if moving the gate could mitigate some accidents while enabling people to access national forest land like they have for decades, it’s worth a try.

Tony Gillhttps://www.saltlakemagazine.com/
Tony Gill is the outdoor and Park City editor for Salt Lake Magazine and previously toiled as editor-in-chief of Telemark Skier Magazine. Most of his time ignoring emails is spent aboard an under-geared single-speed on the trails above his home.
Previous article
4 Tasty Twists on Mashed Potatoes
Next article
‘The Real Housewives of Salt Lake City’ Recap: ‘Highway to Vail’