While most of Summit County takes a deep breath as the strangest summer season on record winds down ahead of what is certain to be a bizarre winter, developers, councilors and concerned citizens continue to advocate for their respective priorities. The inevitable churn of development never hibernates in the Park City area, even as coronavirus continues to stifle the local economy and upend daily life. The future for the mountain community is very much unwritten, and the time is now for interested parties to make their voices heard.

The public hearing on October 12 regarding Hideout’s attempted annexation of land in Richardson Flat is rapidly approaching. The hearing, which can be attended remotely via Zoom or by dialing in with your telephone, at 6:00 p.m. on Monday is quite possibly the last opportunity for individuals to provide their input on the proposed annexation and subsequent development. The process has rankled many observers, Summit County Officials and Park City Officials as the effort to annex and develop the land moves forward under the provisions of an ill-considered and short-lived state law seemingly designed to serve a small special interest.

Details of the proposed development have emerged from a litany of court documents owing to the several concurrent lawsuits facing developer Nathan A. Brockbank, Wells Fargo Bank and United Park City Mines Company among other defendants, as reported first by the Park Record. Among the planned developments is a 24,000-square-foot grocery store, a police and fire station, nearly 200 condos, a church, a school in the Park City School District and—preposterously—a chairlift that will whisk hikers and bikers to the highest point on Richardson Flat.

Thus far Hideout officials have steadfastly pursued annexation of the land in Summit County even after state lawmakers almost immediately repealed H.B. 359 due in large part to public pressure. Pressure and awareness are the only tools the public has at its disposal. If you want to express your opinion, join in the hearing on Monday, October 12 at 6:00 p.m. It’s hard to ignore the insidious appearance of scheduling the hearing on a holiday evening during Indigenous Peoples Day, but you can celebrate by engaging in civil discourse. Details for joining the meeting are below.

Untenable traffic situations have become commonplace in Utah, threatening to strangle the Central Wasatch as increasing numbers of tourists and locals want to visit and play in the mountains. While most recent efforts have been aimed at alleviating traffic woes in the Cottonwood Canyons, the Central Wasatch Commission is looking for a more all-encompassing solution.

The Mountain Transportation System (MTS) project is focusing on vastly reducing the reliance on individual vehicles when traveling to the mountains with a regional solution serving both the Wasatch Front and the Wasatch Back. Among the floated ideas are a gondola connecting Park City Mountain base area with the Brighton Resort base area, providing an “as the crow flies” connection between Big Cottonwood Canyon and Park City, which are only 4 miles apart but require a 45-mile drive in the winter. 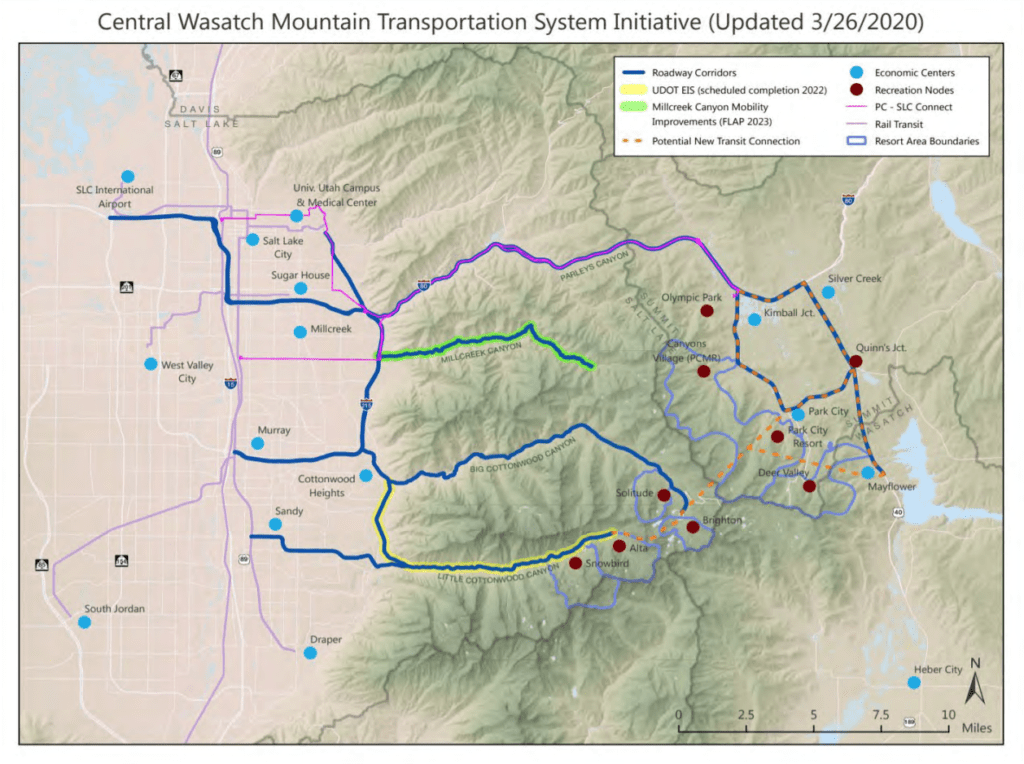 Rapid-transit bus lines, aerial transportation systems with gondolas and trams and rail systems are all being considered, and can be viewed in detail on the Central Wasatch Commission’s Draft MTS Alternative’s Report. You can provide your input by taking the CWC’s build your own MTS survey or by submitting a comment up until October 18.

Everybody loves to complain about traffic, and the ultimate efforts taken to alleviate chronic and worsening congestion will have a huge impact on the quality of life in the area. Make your voice heard today while you still can, or forever hold your peace.

Tony Gillhttps://www.saltlakemagazine.com/
Tony Gill is the outdoor and Park City editor for Salt Lake Magazine and previously toiled as editor-in-chief of Telemark Skier Magazine. Most of his time ignoring emails is spent aboard an under-geared single-speed on the trails above his home.
Previous article
Vice Presidential Debate: Pence vs. Harris
Next article
Women in Business: Suzi Sands