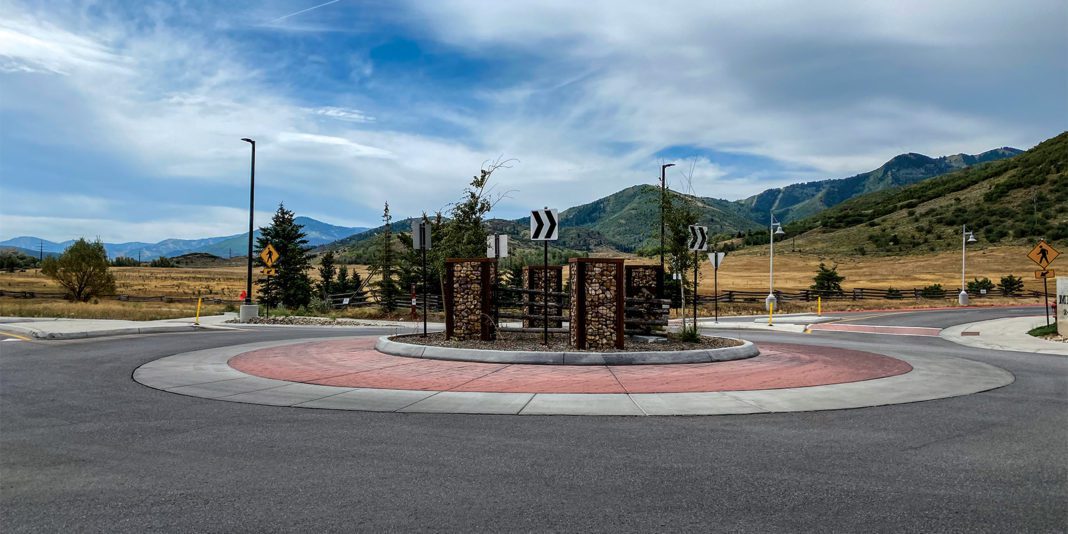 Maybe it’s because of their vaguely European aesthetic, like the gabled roofs on so many faux-Swiss ski chalets. Maybe it’s because the snow driving novices on vacation can’t be trusted to keep from skidding through busy intersections. Maybe the traffic planners around here are just really big NASCAR fans who fancy an endless counterclockwise flow. I don’t know what’s going on with all the traffic circles in Park City, but I know they’re everywhere.

Driving from the parking area at East Canyon to Kimball Junction to pick up some takeout in Kimball Junction, I drove through ten traffic circles. Yes, it could have been as few as three had I taken I-80, but this was back during some beautiful windows-down fall weather, so I turned up KPCW 91.7, cruised under the highway and along Kilby Road past the Skullcandy building. That’s a lot of traffic circles, a bounty that didn’t even include the crown jewel of the greater Park City area thoroughfares: the fabulous circle on Deer Valley Drive providing access to the Snow Park, Guardsman Pass and the Old Town transit center.

Let’s for a moment address the fact I realize a whole bunch of you call these loop-like intersection replacements roundabouts, and those of you from the Northeast inexplicably call them rotaries. Good for you. In Germany, they call them kreisverkehrs and Norwegians call them rundkjørings. Whatever quaint colloquialism you use to refer to traffic circles, I’d argue few, if any, mountain communities have tied their transit identities to eschewing the four-way stop quite like Park City.

The slew of traffic circles in PC has led to some spirited debate about their virtues—especially as the two new mammoth ones on either side of I-80 in Jeremy Ranch and Pinebrook took forever to finish—but we have a century of data showing where roundabouts shine. The Federal Highway Administration says traffic circles reduce the kind of dangerous head-on and right-angle collisions that cause serious injury and death by about 80 percent compared to traffic signal intersections. In a place where half the drivers distractedly gawk out the window at the mountains, that sounds pretty good.

Efficacy aside, Park City’s traffic circles give the town’s roadways an idiosyncratic identity that’s increasingly welcome in a world of homogenized resort communities. I think we can all appreciate a nice turn. This is a ski town after all.

How Do I Drive Through These Roundabout Traffic Circle Rotaries? Traffic circles come in all shapes and sizes, but don’t be intimidated because the rules are simple. Slow down and yield to pedestrians and vehicles from the left before entering the circle. If there’s more than one lane, use the left lane for what would normally be a left turn, the right lane for what would be a right turn and either lane to continue along the same road.

See all of our Park City coverage here.

Tony Gillhttps://www.saltlakemagazine.com/
Tony Gill is the outdoor and Park City editor for Salt Lake Magazine and previously toiled as editor-in-chief of Telemark Skier Magazine. Most of his time ignoring emails is spent aboard an under-geared single-speed on the trails above his home.
Previous article
Feed Your Head at Nohm
Next article
Holiday Food Gifts: No-Brainer Shopping

Developing workforce housing in Park City is a Sisyphean task. Fundamentally, it’s an inventory problem we can’t come close to correcting, especially with citizens fighting development at every turn.