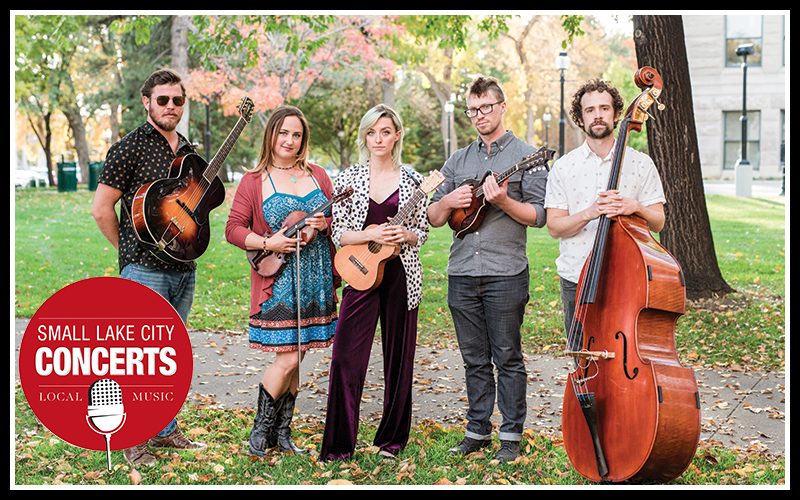 Ben Weiss invited some musician friends he knew, Zach Downes and Andrew Nelson, to jam at a party for a few hours with a musician he’d never really played with, Katia Racine. “Three hours flew by,” Weiss says, “So at the end we all looked at each other and said ‘Well, we should start a band.’”

And that’s how the Salt Lake-based band Pixie and the Partygrass Boys was born four years ago.

Since joined by Amanda Grapes on fiddle, the band has been an important part of the Salt Lake music scene. On any given night you might find Pixie and the Partygrass Boys as the opener at The Commonwealth Room, playing a regular gig at the Hog Wallow or at their once-weekly bluegrass jam at Gracie’s.

Part of the band’s popularity is their genre-busting style—Weiss describes the band as “non- traditional bluegrass with heavy jazz and funk influences. “The crossover of playing Stevie Wonder with a bluegrass band seemed like a no-brainer for us,” says Weiss. “People who love bluegrass get to see something they might not usually see at a bluegrass show, and people who don’t normally like bluegrass might find something that they do like because we’re playing something familiar with a bluegrass style.”

And while the band started with a lot of covers, these days they play more and more of their own music. “Every member of the band is a composer,” says Weiss, “We all write songs then get together as a band to arrange them.” The fans are happy with the transition, too, he says, “It’s a really special thing to watch our fans come because we are fun and we play songs we write and now they come and sing along to songs we’ve written.”

Ultimately, Weiss says the goal of the group has always been the same, “When we started this band we wanted to have fun. We wanted to play music people could dance to and we wanted to have a creative outlet to express ourselves freely. We always try to have the most fun in the room, and you know, sometimes we do. It’s not traditional but we always keep it ‘grassy.”

Watch all of our Small Lake City Concerts at saltlakemagazine.com/small-lake

Christie Marcyhttps://www.saltlakemagazine.com/
Christie Marcy is a former managing editor at Salt Lake magazine. Though she writes about everything, she has a particular interest in arts and culture in Utah. In the summer months, you will find her at any given outdoor concert on any given night. In the winter, you will find her wishing for summer. Follow her on social media at @whynotboth.
Previous article
Bollywood Boulevard: An evening of Indian food and cinema
Next article
What Do Utah’s New DUI Laws Mean for You?