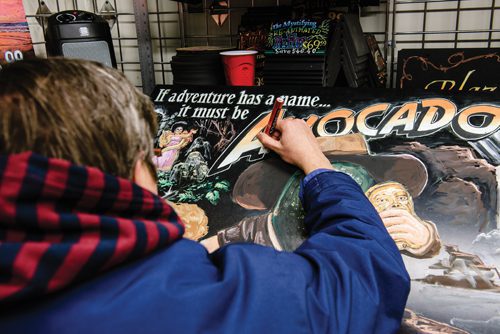 The Rock & Roll Hall of Fame member might be 65 but her voice hasn’t skipped a beat in the years since she belted out  the lyrics to the hard rocking “Barracuda”. Her instantly recognizable sultry sound was in full effect on New Year’s Eve at Park City’s Eccles Center.

She’s got a new band, The Ann Wilson Thing—and unlike the groundbreaking Heart—this time Wilson was the only woman onstage.

She wore a short sequined dress with a long, black damask jacket over it and shoes that tied at the ankle with pom-poms at the end as she and the band worked through a selection of the American songbook, notably without playing a single Heart song.

“We’re going to visit some really wonderful music with The Ann Wilson Thing,” she told the crowd. “It’s very different that the other thing.” And indeed it was.

She covered Creedence Clearwater Revival, Screamin’ Jay Hawkins, Bob Dylan, John Lennon, Neil Young and Led Zeppelin. She only picked up the guitar once all night—for “Permission” a song she wrote with a bandmate.

Wilson didn’t say much as she moved across the stage oozing sex appeal and gyrating to the music. Someone shouted “Play some Heart!” from the crowd, but she just smiled and kept on singing other people’s songs.

In the end, the Eccles Center, with their comfortable chairs and sometimes stuff Park City patrons, didn’t feel like the right venue for Wilson and her band. This is a show that needs to be seen in a smoky club (if they even exist anymore) or at the very least a venue that can sell alcohol.

Wilson told the crowd her new year resolution before her one-song encore, “I’m going to open up and let love hit me. I’m not putting up any walls in 2016.”

The quiet and almost reflective nature of the show might have surprised people who came expecting Wilson to scream out the lyrics to “What About Love” but it was still a nice bookend to 2015.

Christie Marcyhttps://www.saltlakemagazine.com/
Christie Marcy is a former managing editor at Salt Lake magazine. Though she writes about everything, she has a particular interest in arts and culture in Utah. In the summer months, you will find her at any given outdoor concert on any given night. In the winter, you will find her wishing for summer. Follow her on social media at @whynotboth.
Previous article
DABC Misses a Bet
Next article
Wine, Theater and Food…WTF!