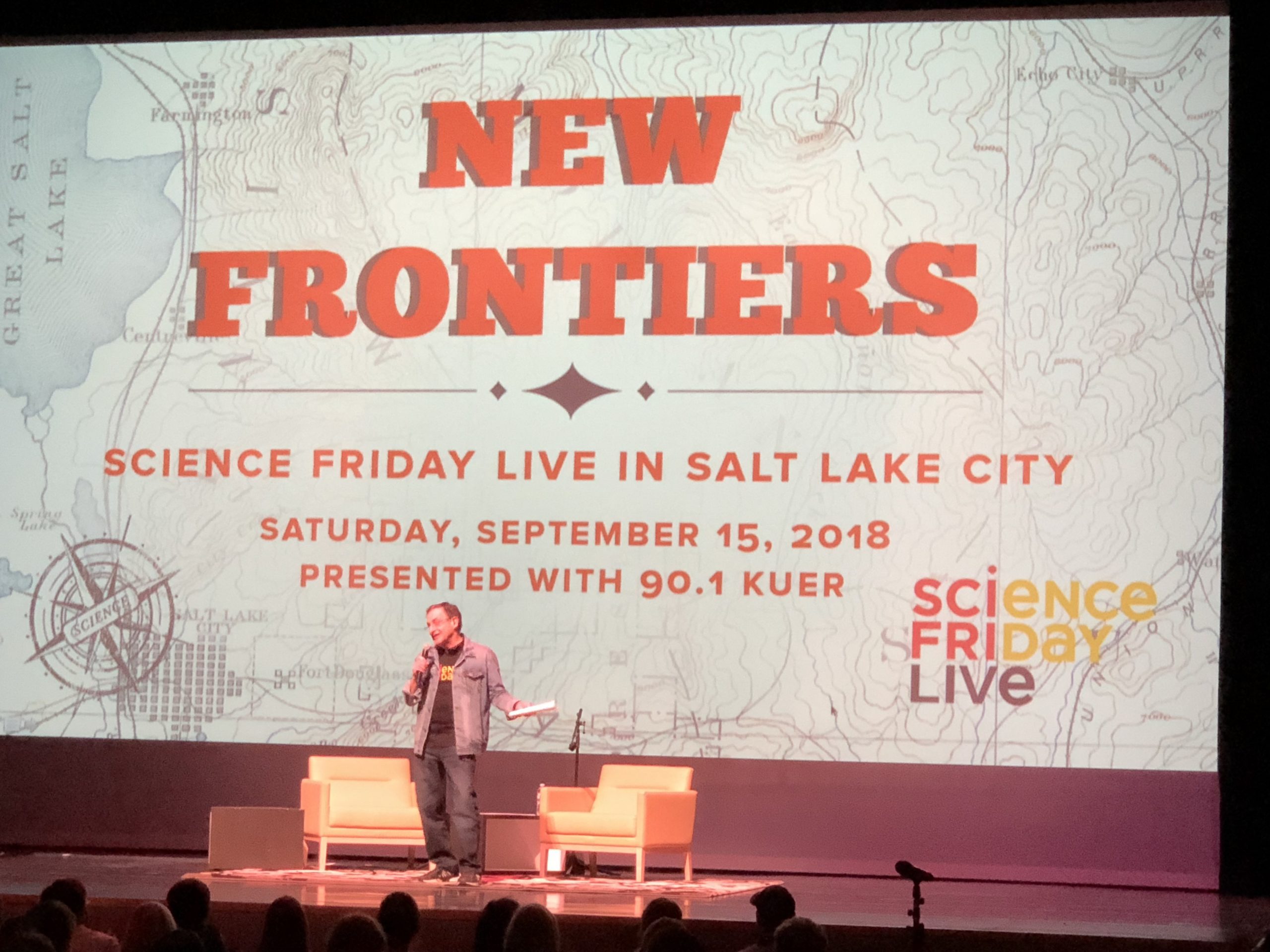 Review: Live from the Eccles Theater, Science Friday (on Saturday)

When Ira Flatow came onto the stage in a denim jacket Saturday night at Eccles Theater, I thought, “Well, you don’t have to dress up for radio, I guess.” But the Science Friday host quickly told the audience that his jacket was full of patches from his last summer vacation in Utah—and that he and his wife were headed out to more Utah National Parks and other natural wonders first thing Sunday morning.

Oh. Well, in that case, Ira—all is forgiven.

What followed was a live recording of Flatow’s weekly science-themed NPR show. And all segments had a Utah connection—even the house band for the evening, the surf music-inspired Boys Ranch.

The first guest was Jaimi Butler from the Great Salt Lake Institute, who spoke about birds on the Great Salt Lake. Butler was adorably enthusiastic, even when talking about the stench of Gunnison Island. The Department of Wildlife Resources-protected refuge for pelicans is part of a project dubbed “Peli-cam” wherein pelicans are fitted with GoPros so that scientists can learn more about their habits. And! Here’s the best part! They need our help. You can go to this link to help sort through the photos to document predators, weather and nesting behaviors, citizen scientists!

Next up was a RadioWest video about dark skies, both the infinite skies viewable in Torrey and the effect light pollution has on us here in Salt Lake. Hint: It’s bad. Guest Jess Dwyer, of Dark Sky SLC, told the audience that light pollution can contribute to everything from anxiety to breast cancer (!). But there are things we can do—like warm yellow LED lights. But, one non-human side effect of the lights is the death of up to one million migratory birds, who either are confused by the light and then exhausted or are killed in collisions. But again! You can help! Aside from turning out unneeded lights, Dark Sky needs volunteers to document dead birds in the downtown area. More info here. You can also text Dark Sky Challenge to 917-242-4070 to get a week’s worth of tips to help you—and nature—rest easy. Literally.

The third guest was Dr. Nalini Nadkarni, a biology professor at the U. While her science is not Utah-based, it was fascinating. She studies the organisms that live on top of trees in the rainforest. Where do they root, how do they get there, that sort of thing. A pioneer in the field, she intended a tool she called a master-caster—picture a fishing reel and slingshot combined—to more easily climb the giant trees in the rainforest. She also wore a fantastic jacket that she says is a conversation-starter to get people to think about conservation. A conservation-conversation, if you will.

And then, finally, Dr. Randall Irmis, curator at NHMU, who recently uncovered phytosaur remains near Bears Ears—a Science Friday team joined him for part of that excavation. Turns out—paleontology is hard, hands-on work as we learned through a period of slides and audio of their trip. Most notably from Dr. Irmis’ segment, though, we learned that you can lick rocks (hey there, Rep. Mike Noel) to tell if they are bones or just sediment. Bones, it turns out, stick to your tongue. Even Ira Flatow was surprised by this. Inmis said he’s interested in the triassic period because the period is bookended by mass extinctions that he believes were caused by greenhouse gasses. “If we’re interested in where we are going,” he said, “we have to go back.” But, “There’s still time to change our ways.” Well, goodness. When you put it that way!

After the final guest there was some radio business to take care of—canned applause, silence, “pick-ups” of audio that was lost in the recording, that sort of thing. Then Flatow thanked KUER, etc. before leaving the stage.

Leaving me to wonder, when can we get that other public radio Ira (or Terry or Peter) to vacation here? I could use more NPR live recordings in my life.

See all of our A&E coverage here.

Christie Marcyhttps://www.saltlakemagazine.com/
Christie Marcy is a former managing editor at Salt Lake magazine. Though she writes about everything, she has a particular interest in arts and culture in Utah. In the summer months, you will find her at any given outdoor concert on any given night. In the winter, you will find her wishing for summer. Follow her on social media at @whynotboth.
Previous article
Farm-to-Glass Cocktail Contest – Drink. Vote. Repeat.
Next article
Interview with Herb Alpert, “A Lucky Guy”