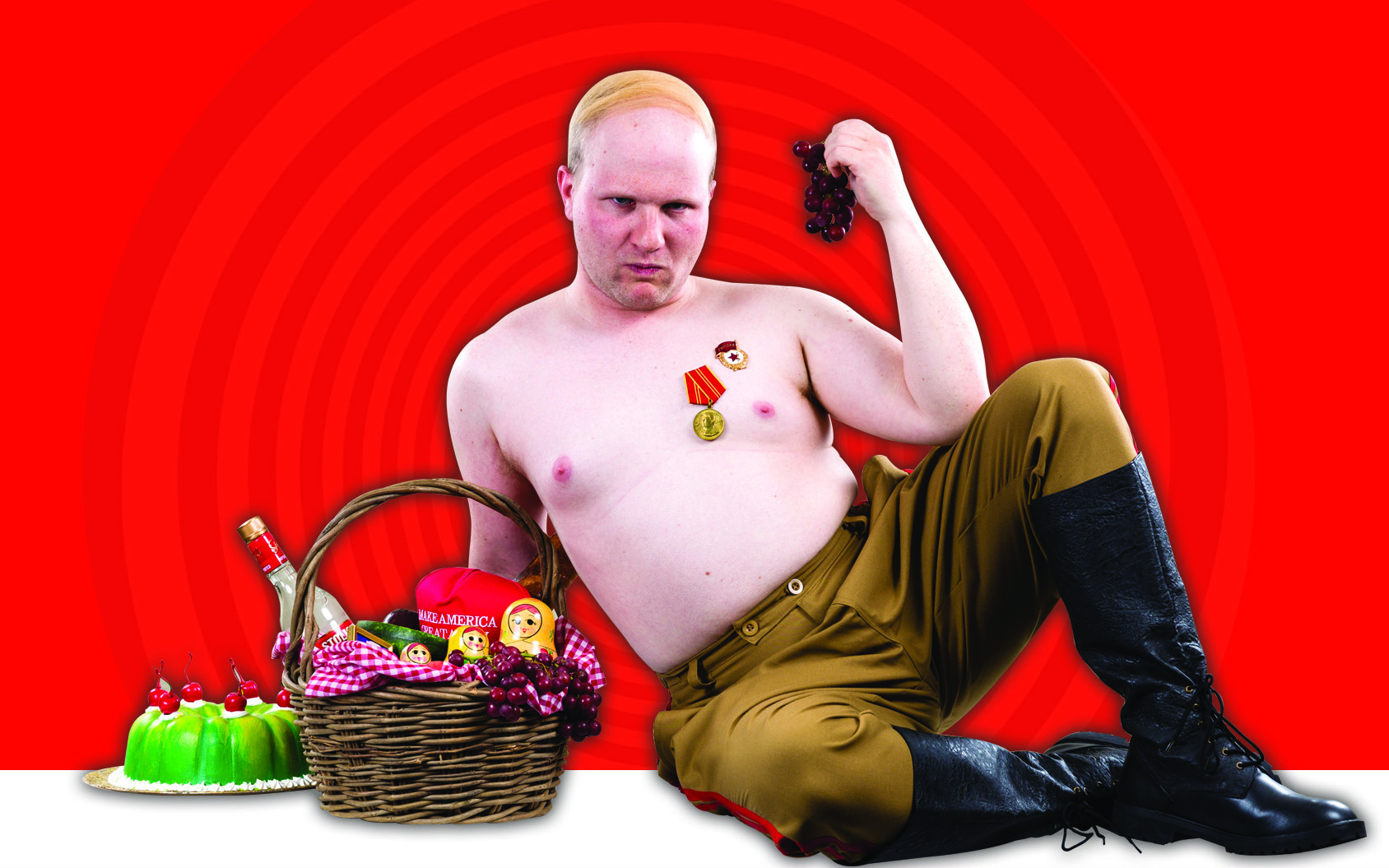 Can you believe the Russians are the bad guys again? As a middle-of-the-pack Gen-Xer, I caught the last wave of anti-Russia pop-culture vilification at a young age, mainly through Rocky and Bullwinkle cartoons featuring the dastardly duo of Boris and Natasha, bomb-throwing spies who were always out to “get moose and squirrel.” Those hilarious accents, the cold sneers, the vodka, the fur hats and fishnet stockings and spy-versus-spy slapstick are all on glorious display in this year’s Voyeur.

We open in a Utah State Liquor Store, on the day after Trump’s Election, with a homeless man and Trump supporter (who has a bonafide Utah collection of surnames) Sterling Cannon Young Snow Smith (Dan Larrinaga) and an over-it liquor store clerk Peggy (Annette Wright) arguing over the relative merits of the new president’s victory. In the usual Voyeur insanity, this setting morphs into a confab for Russian spies working to blackmail Utah Rep. Jason Chaffetz  into investigating Russian meddling in the election. Why isn’t really clear, but Voyeur scribes Allen Nevins and Nancy Borgenicht never let plot or logic get in the way of a good (or bad) joke. Basically the whole production is a long set up for a “must get moose and squirrel” gag.

Somehow there’s a reconstituted Buddy Holly (C.J. Strong)—a trick to shoehorn in a parody of “Peggy Sue” and lay in some references to the “Day the Music Died”—a personified and catfighting Siri (Katryna Williams) and Alexa (Becky Jeanne)—Apple and Amazon’s AI programs—and, well, a whole lot of other nonsense. Clearly Nevins and Borgenicht simply had too much material this season to stop and catch up, which is indicated in the play’s subtitle “The Sh*t Show,” a punchline that Wright’s deadpan liquor store clerk wearily intones throughout.

As in welcome to it.

Last year’s farce was heavy on the Trump (remember those halcyon days when we thought there was no way he’d be president?) and it is telling that Trump is in the back drop but not the center of this year’s romp. And while it’s a bummer we see only a small glimpse of Justin Ivie’s brilliant Trump caricature, it’s proof that Nevins and Borgenicht have their finger on our collective funny bone.

Seems like we’re all realizing that joke isn’t funny anymore.

Never fear. Instead of a Trump sendup, we have Eb Madson, who is usually relegated to playing stoner Moroni or a demonic Gayle Ruzicka, but this year shines as a diminutive, shirtless and strutting Vladmir Putin. By his side is Emily Starr in a variety of seductive Russian spy roles—cooing and pouting and having so much fun with that accent.

This year’s play is light on the Mormon-bashing and inside doctrinal baseball that is often the hallmark of Voyeur. Preferring to focus on the national dilemma, it sets its sights on the retired (or is it recused?) Jason Chaffetz, played with whiney schoolboy aplomb by Eric Lee Brotherson. (Wright also appears as a wizened Orrin Hatch in a Weekend at Bernie’s bit that is one of the best gags of the night.)

And Annette Wright? She is a Utah treasure—our own Phyills Diller. Her deadpans and eye rolling fourth-wall breaks are a mainstay of any Voyeur production. May she forever reign as Heavenly Mother, Peggy the Liquor Store Clerk or a Hannibal Lector Orrin Hatch.

The ensemble once again goes all out. I’ve seen Voyeur regularly over the years, and every time, no matter how silly or convoluted each year’s particular farce is, I’m invariably impressed with the gusto with which the SLAC song-and-dance team tackles the material. This production runs all summer, mind you, and the ensemble somehow possess an indefatigable commitment to the schtick. Standing out from the crowd this year was SLAC newcomer Jillian Joy who managed to sell even the corniest lyric to the back of the house.

As Voyeur’s go, this one is pretty solid. The only quibble I have is the third act, which is essentially a repository for all the jokes and gags they couldn’t cram into the first two. I assure you no joke is left behind this year, which is what it what it is. Hey it’s Voyeur. It’s a big dumb thing we do in Utah and this year it’s heavy on the borscht. Be sure to pack some vodka in your picnic basket.

Jeremy Pughhttps://www.saltlakemagazine.com/
Jeremy Pugh is Salt Lake magazine's Editor. He covers culture, history, the outdoors and whatever needs a look. Jeremy is also the author of the book "100 Things to Do in Salt Lake City Before You Die" and the co-author of the history, culture and urban legend guidebook "Secret Salt Lake."
Previous article
‘Hops on the Hill’ Returning to Stein Eriksen Lodge
Next article
Under the Influence