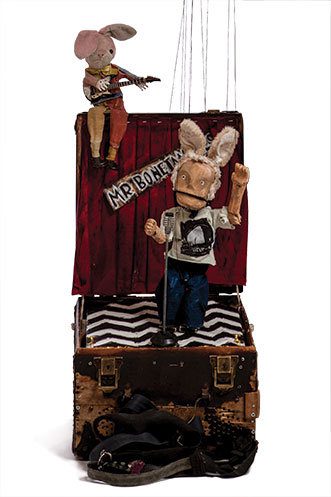 Puppets are old-fashioned, ancient and simple—barely qualifying as entertainment in this age of CGI and video games. But somehow at this year’s Pie & Beer Day festival, a crowd of hipsters, plus me, gathered around a cocky little wooden skeleton marionette doing an attitudinous dance to the music of Hank Williams. Meet Mister Bonetangles—you may recognize him from the movie, Chef—who has performed on the streets of Dallas, Los Angeles, Charleston and now Salt Lake City.

I didn’t even notice who was holding the strings. Turns out, it was Will Schutze. On behalf of Bonetangles, Schutze cops to the cockiness.

“Mr. Bonetangles has become the overly-confident star of the show,” Schutze explains. “He’s a great dancer and entertainer, sure, but he lacks originality. All he ever does is mimic other singers from the past and even some from the present. In fact, he really just lip-syncs to their songs. That’s not even karaoke. Deep down, he’s aware of this and a bit insecure, so he makes up for it by acting like a very big star. In his defense, he was the first and founding member of the group, and he actually has quite a few loyal fans.”

Interested in theater and performance since high school, Schutze nevertheless went to University of Texas and studied political science.

After graduating, he returned to his home town of Dallas and reconnected with his old drama teacher Patricia Hardman and her husband, John, who performed a puppet show called World on a String every year at the Texas State Fair. Schutze helped out. 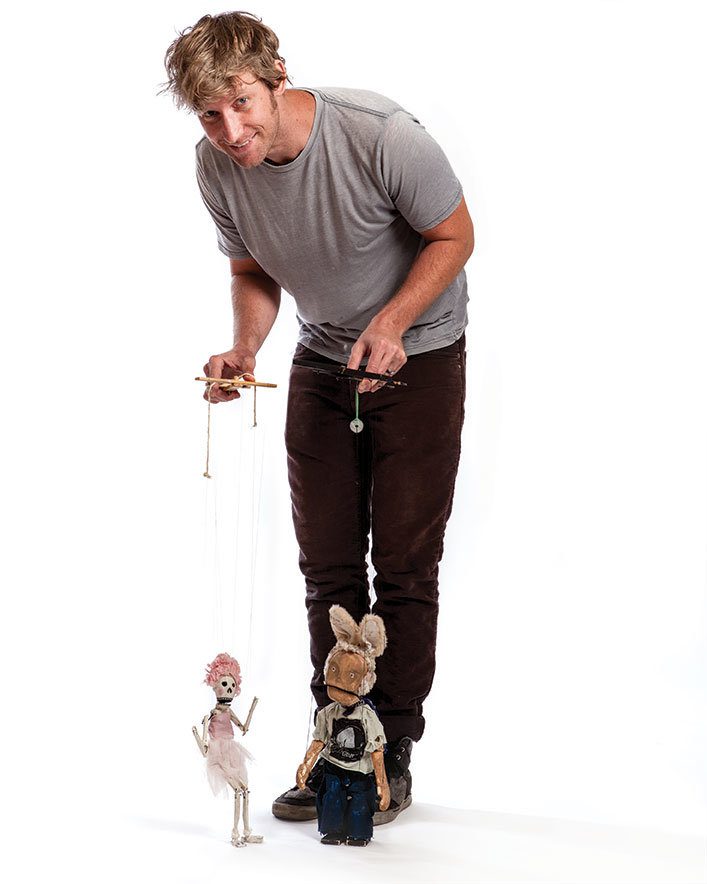 “That’s when I knew that puppetry was going to be my super power that would allow me to shed my insecurities and perform my dreams,” he says.

Hooked on puppets, Schutze took on Hardman’s annual role as Scrooge, a puppet who has been heckling the Christmas crowds at North Park Center every year for four decades.

But his dream is to write and perform original music. Which he does, only, the puppets do it: Schutze has created his own troupe of stringed singers and dancers with distinct personalities.

“Clyde, the clown with white and black makeup, has a song that illustrates the true emotions behind his jolly disposition. It goes, “Everybody thinks that I’m a clown. They don’t ever see me when I’m down…” Miss Bonetangles, who may be the sister, partner or no relation to Mr. Bonetangles (kind of a Jack and Meg White thing going on) is tough and sassy,” says Schutze. “When I first sculpted her and introduced her into the show, she was a huge threat to Mr. Bonetangles. He thought he was being replaced, but they worked together and earned each other’s respect. She’s an incredible dancer. She can moonwalk better than Mr. Bonetangles.”

Will has given each of these puppets a voice—his voice—whether they are being interviewed themselves, singing or performing lines from a script. “I do all the different voices myself, sometimes naturally, sometimes through audio editing if I’m recording.”

Willy James, an angst-filled teenage rabbit boy, is the newest addition to the troupe, lip syncs to recordings of Schutz’s songs. “I always dreamed of being a singer in a band, but I’ve always been way too shy to sing in front of people,” says Schutze.

You can keep up with Schutze, Bonetangles, James and the rest of the gang on their Facebook page.

Mary Brown Maloufhttps://www.saltlakemagazine.com/
Mary Brown Malouf is the late Executive Editor of Salt Lake magazine and Utah's expert on local food and dining. She still does not, however, know how to make a decent cup of coffee.
Previous article
Concert Preview: Billy Joel at The Viv
Next article
Utah Children's Theater Presents Charlie and the Chocolate Factory