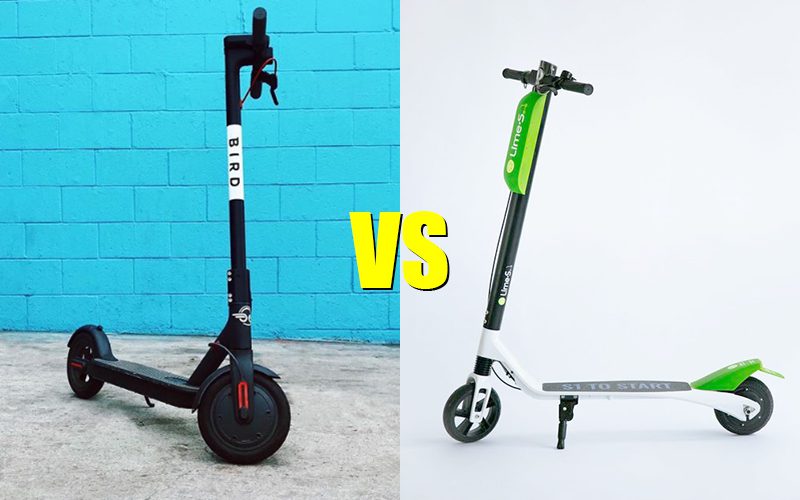 Which is Faster? Bird? Or Lime?

One day they weren’t there. The next they were. Like many American cities, Salt Lake got scootered. Stand up electric-powered scooters started showing up around town this summer to the dismay of city leaders who were caught flat-footed and, well, just tend to like things orderly. We can’t have all these kids zooming around! But zoom they are and despite continued fist shaking by the older folks. They appear here to stay. The two companies (there are rumors of more) Lime and Bird, check out their zippy rides via app, much like you’d call a Lyft or an Uber. They’re cheap, plentiful and, yeah, yeah, they’re fun. They are most plentiful in downtown (despite Bird and Lime placating city leaders with promises of serving transit-starved neighborhoods outside the city core). Final finger wagging aside, you can grab one and take it around the city, seeing the sites, stopping into restaurants, shops and bars and just leave the darn things anywhere.

We decided, however, if you can’t beat ’em join ’em and sent our intrepid intern Johnny Tucker down to Liberty Park to find out the real question: Which is faster, Bird or Lime?

Johnny Reports: The Lime hauled. And as you can see from the tape, the Lime pulls away quickly from the Bird. So umm. Fruits are better?

If you want to hop on a scooter you’ll need to do some “legwork” on your phone, download the Bird and Lime apps and set up an account, which is a bit of a chore. Once you’ve downloaded you will have to set up an account. After you’ve set that up the app will display all of the available scooters within the city. Once you’ve found the one you would like to take scan the QR code and you will be ready to go.

It’s often the case that you’ll walk around with both apps open trying to find an available one, like playing Pokemon Go. Sometimes you will come upon one and when you scan it, it says its damaged. And do make sure it isn’t damaged. We’ve hopped on ones with low tires, jenky throttles and other problems. Otherwise, try not to die. Please.

Search our Newcomers’ Guide for more.

Salt Lake Magazinehttps://www.saltlakemagazine.com/
Salt Lake is your best guide to the Utah lifestyle. From food to fashion, travel and the arts, Salt Lake magazine has something for everyone. Follow us on Instagram, Facebook and Twitter @SLmag.
Previous article
Taste Test – Apples to Apples – Honeycrisp or SweeTango?
Next article
Interview – The Wombats – Why ‘Beautiful People Will Ruin Your Life,’ but it’s OK