Shoe-shots and Salty Sarcasm at The State Room

Last Thursday, March 7 at the State Room was so weird that I needed a couple of days to process what happened. So forgive me if this all comes out discombobulated—the show was likewise all over the place, sometimes in the best of ways, and at other times, irritatingly so. 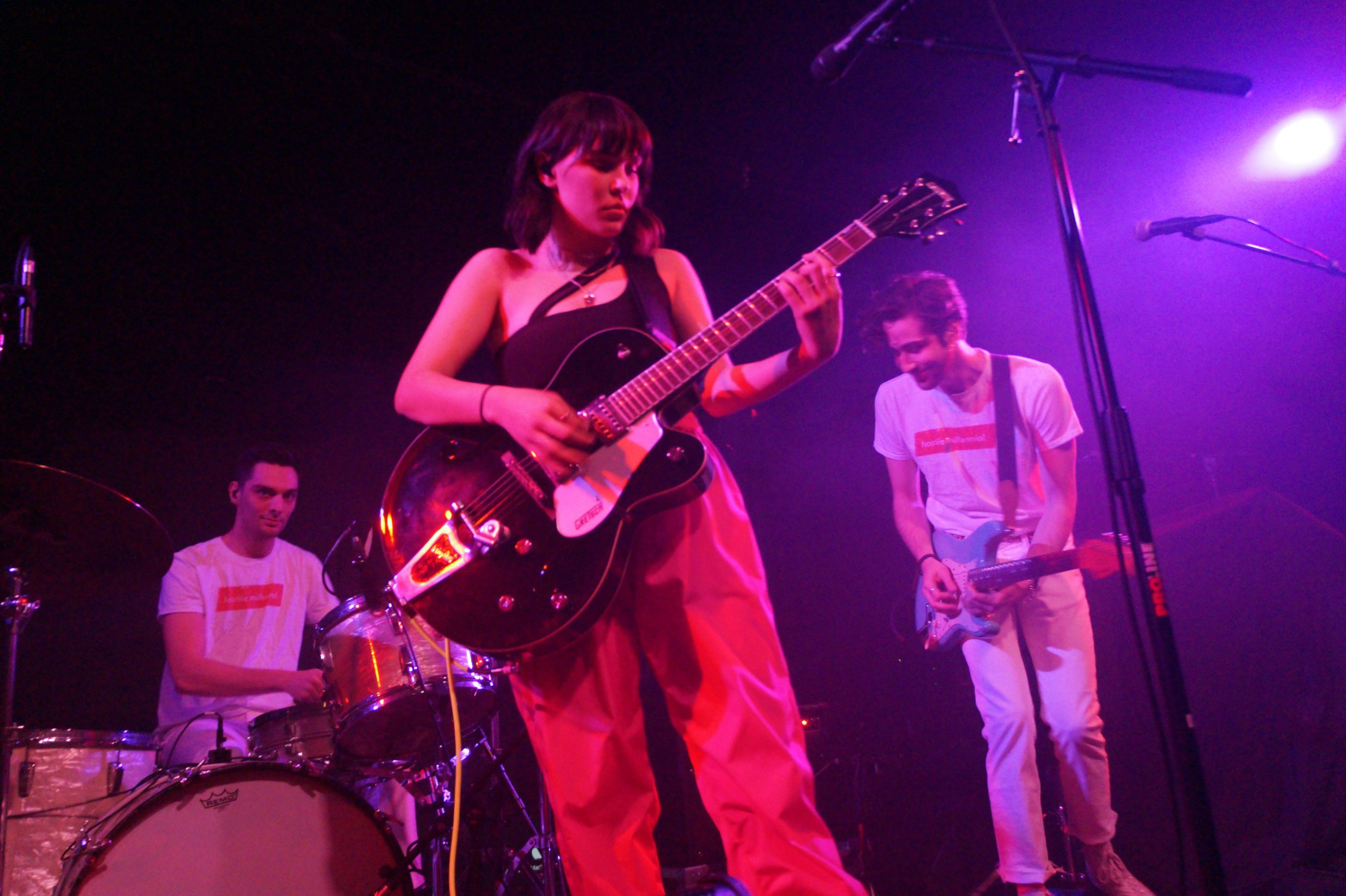 Openers UPSAHL was by far the most coherent and musical act of the night. The lead singer (whose last name is Upsahl) sang with the coyness of Gwen Stefani and pipes reminiscent of SHAED’s frontwoman, Chelsea Lee, relating to us with songs called “Drugs,” (a fun singalong about her party priorities), “All My Friends Are Rich,” and “Stressed” (“Hey, I’m stressed!” shouted one guy when she introduced the song). Most of the set featured smart pop-meets-R&B songs poised to become mainstream hits, should she keep her momentum and publicity up. “Can You Hear Me Now,” features a killer bass line plus UPSAHL’s versatile vocals. She dedicated it to “all the f*ckboys out there!” “Anyone here know someone like that?” she asked. “No! We’re in Utah!” shouted a woman in the front row. “That’s true,” the singer acknowledged. 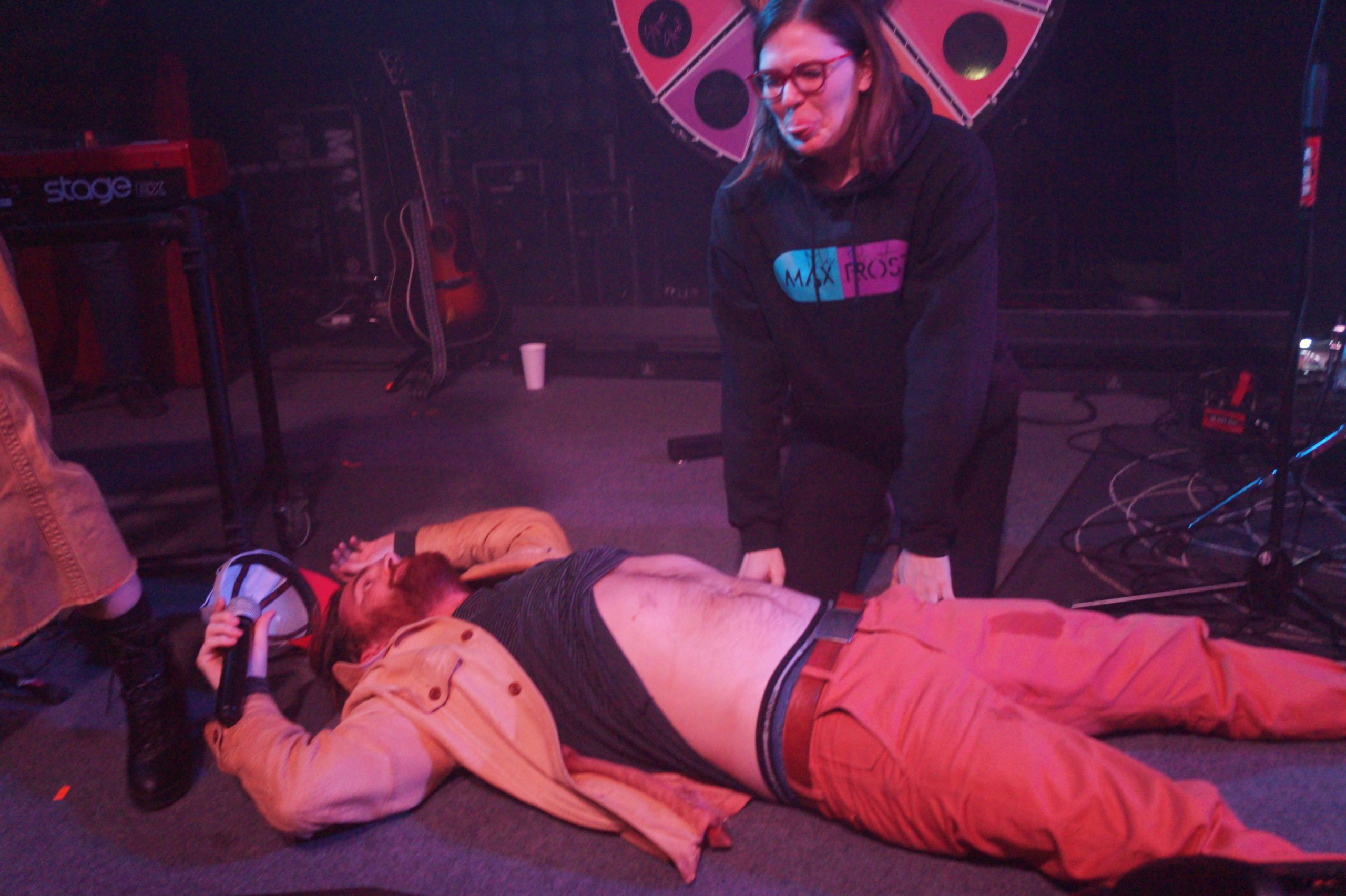 Second opener Mikey Mike really wanted us to know he showered yesterday. The first time he shared the information was after he called up the aforementioned woman to spin a big wheel with an illustration of his crazed face in its center. It landed on a free-for-all, which meant she could either take A) a “shoe shot” – drink Jim Beam whiskey out of Mikey’s shoe, or B) a shot from his belly button. The woman understandably grappled with her decision for a good minute before deciding on option B. “I support this!” her husband shouted from the front row. And as assurance, Mikey let her and us know that it shouldn’t be too bad of because he had showered the night prior. The woman emerged from his torso, grimacing, but also seemingly fulfilled with the overall experience. 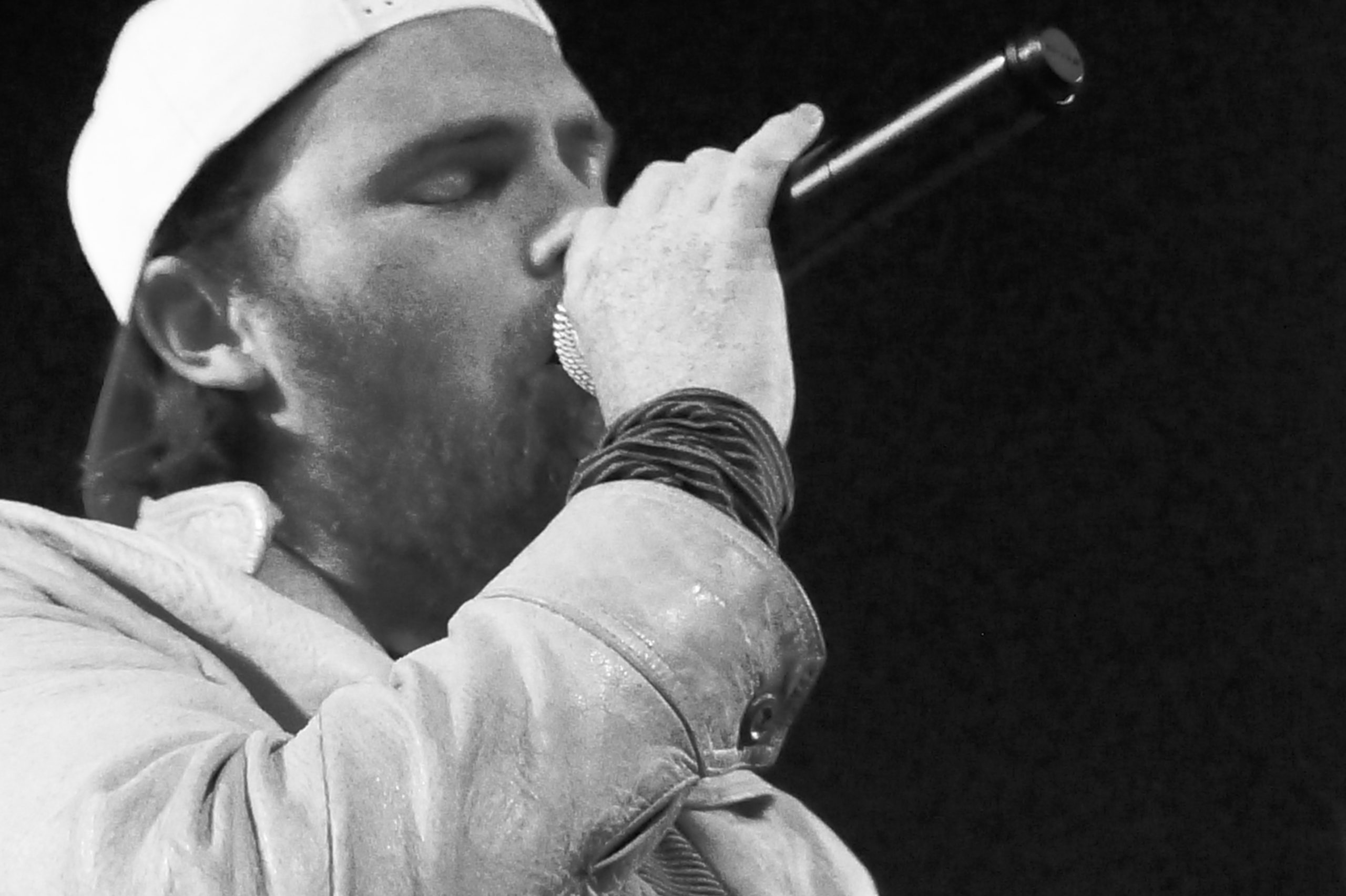 He also played some music with his band. He had the country-rock vibe of Kid Rock and the feel-goodness of Jason Mraz or Jack Johnson. While none of these artists are especially relevant anymore, Mikey made his songs special because of his effervescently nihilistic charm. “How y’all doing tonight?” he said. “Good!” we replied. He adjusted his backwards baseball cap and took a swig from his paper cup, which likely held more Jim Beam. “Alright, well f*ck you!” he slurred, before going into a song. The second wheel-spin was met with more reticence from potential crowd participants. Some tentative hands were raised, then one lucky girl was hoisted onstage. Again, the spin landed on a free-for-all. Mikey gave her the choice between A) a shoe-shot, or B) lighting him on fire. The girl opted for both. She unfortunately waited too long to take the shot, as the whiskey soaked into Mikey’s boot (“These were new shoes, too!” he lamented), so she had a do-over. Borrowing a lighter from a kind audience member, she then lit some of his chest on fire. Fortunately, it was put out quickly. “My hair usually sets on fire and does this cool thing,” said Mikey, “but I showered, so…” 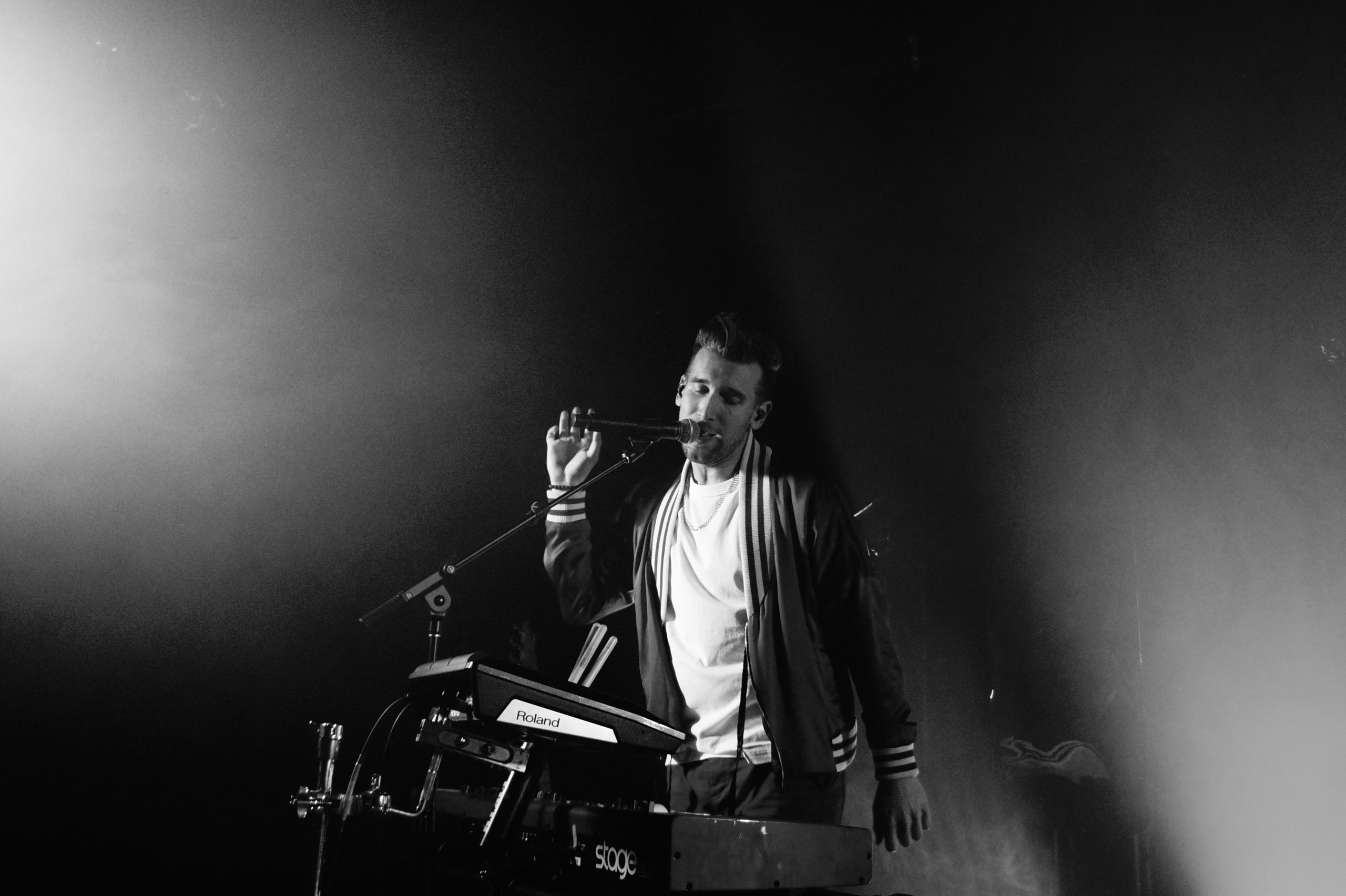 I’ve listened to, and liked, Max Frost’s music without knowing much else about him: what he looked like; his personality. And maybe that was for the best. The solo singer and instrumentalist was no-doubt impressive, darting from one side of the stage to set up his vocal and instrumental loops, then to the other side, to sing and drum. It was a strange and somewhat distracting setup, and I wondered why all the equipment couldn’t just be right next to each other, but the energy it demanded justified the track suit he wore, I guess. It can be cool when a singer’s visual aesthetic unexpectedly clashes with his music: his voice was soulful, he busted out an impeccable falsetto at one point, and he played virtually every instrument while seamlessly transitioning between songs. 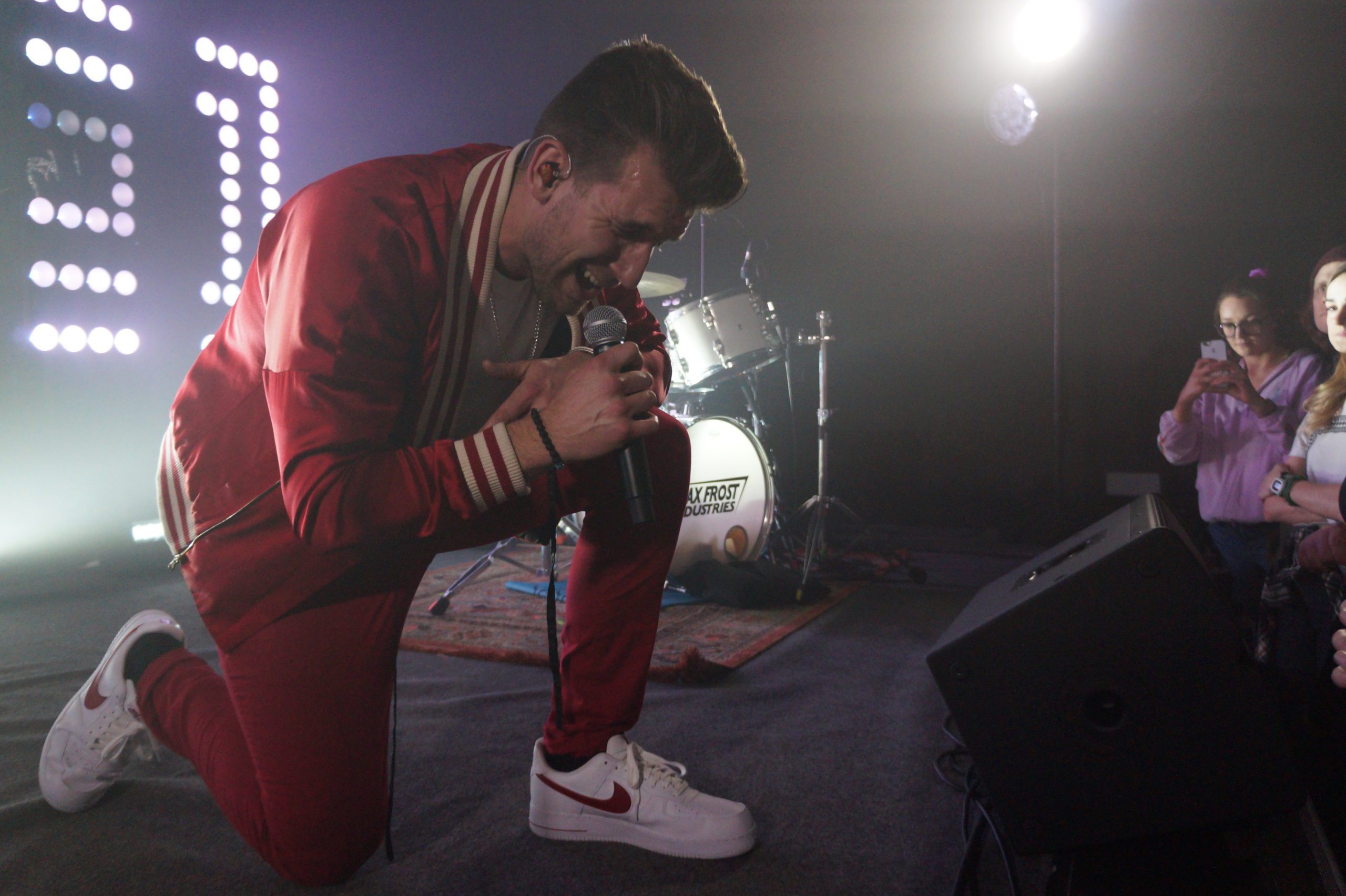 But it was hard to get over the high school jockiness he sporadically exuded. He jabbed at those sitting at the back to “get up and party” because “this isn’t a James Taylor show,” and said he “wasn’t going to let it go” until they obliged. And indeed, he really didn’t let it go. One person made a good point, that she could hear better from the back, others followed his instructions, and others simply left the room. Another uncomfortable moment came when he talked about it being good to be back in Utah. “Last time I was in Salt Lake City, I was playing at that arena,” he tells us, referring to his February show at Vivint. He chuckles. “I guess that means my career has taken a downward spiral, now that I’m playing here?” 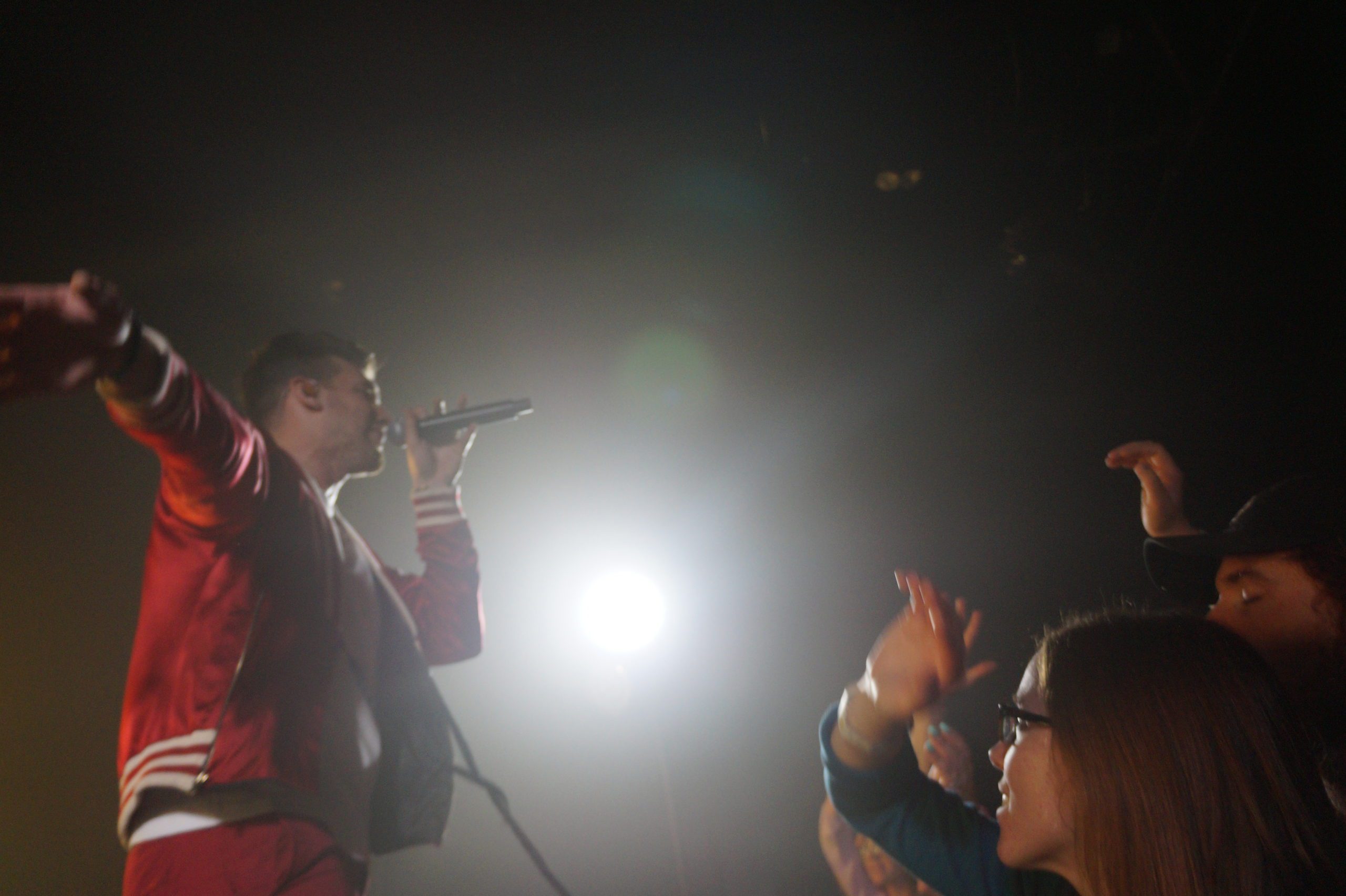 But “White Lies” and “Withdrawal” were particularly excellent live, and his general showmanship (minus the awkward banter) seemed to get people bopping, so tomato tomahto. 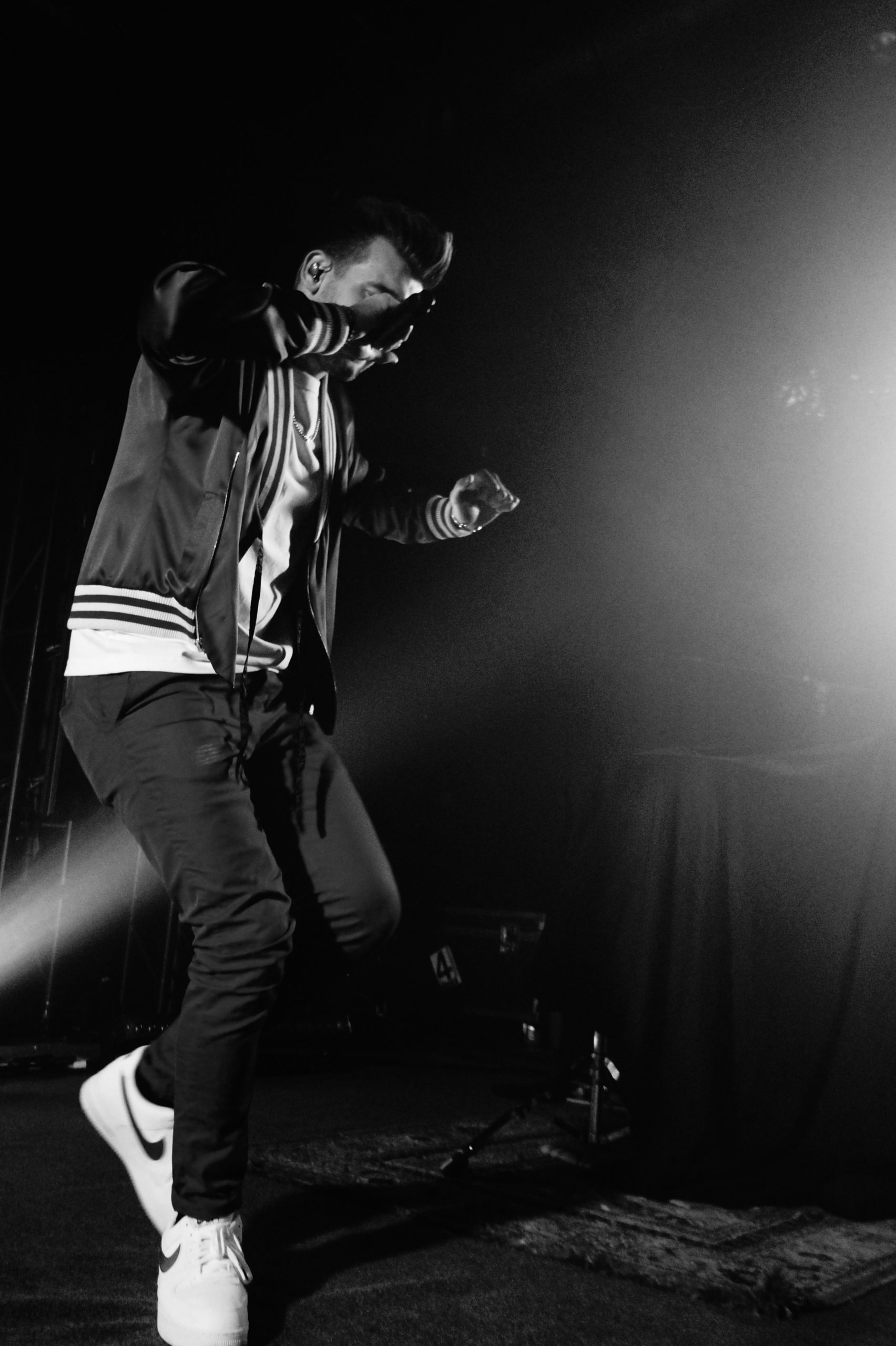 For more photos from the show, check out the full album. See all our music coverage here.

Charissa Chehttps://saltlakemagazine.com
Charissa Che was born and raised in NYC and has been a journalist for over 12 years in news and arts and entertainment. She is a music contributor for Salt Lake Magazine. Additionally, she holds a Ph.D. candidate in Writing & Rhetoric at the University of Utah. She prides herself on following the best cat accounts on Instagram. Calicos preferred.
Previous article
Between the Bread // All the Meat
Next article
Park City and Deer Valley Heat Up for Spring