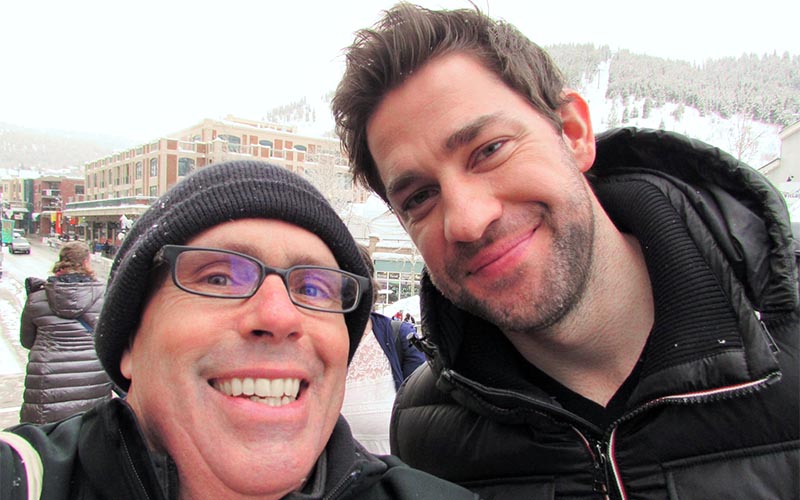 For years one of our favorite “Friends of the Magazine” (FOM), Stuart Graves has shared his adventures running around Main Street in Park City searching for celebrities during the Sundance Film Festival and asking them to take, as he says, “an old-school selfie” with his ancient point-and-shoot camera. We call them #stuartselfies. Now in 2023, the Sundance Film Festival has returned. It’s been three years since Stuart has been able to share his antics and portfolio of photos of his face alongside many famous faces. When Sundance called the code in 2022 (at the last minute) and cancelled the in-person festival he announced that he was formally retired from celebrity hunting (although he’s always looking wherever he travels). But like Tom Brady, Stuart just couldn’t stay on the bench and he will be back on Main Street. We’re looking foward to a brand new batch of #stuartselfies. Meanwhile, we asked him to share some of his greatest #stuartselfie hits (and the stories behind them) from over the years. (Click here for his 2023 celebrity adventures.)

Salt Lake Magazinehttps://www.saltlakemagazine.com/
Salt Lake is your best guide to the Utah lifestyle. From food to fashion, travel and the arts, Salt Lake magazine has something for everyone. Follow us on Instagram, Facebook and Twitter @SLmag.
Previous article
Philanthropy: Mark Miller Subaru
Next article
Review: Neil Young’s Harvest Tribute Show