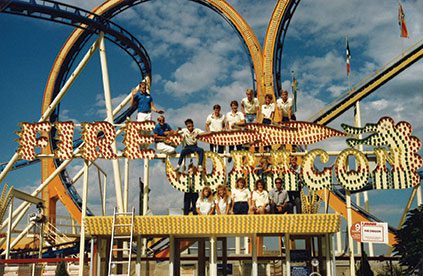 I was a Teenage Goonie: A Guide to Loving Lagoon for the Middle Aged

I first went to Lagoon in 1977. I was 5 years old. We were on a family trip from Idaho Falls to Salt Lake City, the Big City back then. The trip was unwittingly timed with an important  milestone for Lagoon. Bob Freed, who had been the closest thing to Lagoon’s Walt Disney, died in 1975 and his surviving brothers, led by Peter Freed, set about continuing his work. In 1976, America’s Bicentennial, three important Lagoon icons opened to the public: Pioneer Village, the Log Flume and the Jet Star 2, Lagoon’s first steel coaster. A year later, kindergarten-bound me, who neither cared nor knew any of this, arrived on the scene. I liked cowboys and boy howdy did Lagoon’s new Pioneer Village have them. 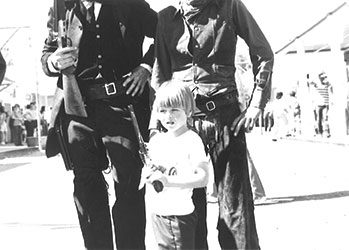 Back then there were historical re-enactors in all the shops lining the western town’s faux Main Street, and the big attraction (in addition to the Log Flume) was a thrilling high-noon shoot-out gun battle that stuntmen performed until the ’90s. Please note that 1977 was the year Star Wars premiered, and Lagoon’s cowboys and roller coasters combined with Jedi and lightsabers caused my growing boy brain to very nearly explode. My father, still in his 20s, was as much of a kid as I was, and because my mother didn’t really care for amusement park rides, and my younger brother was back home with grandma, it was just me and my dad. We rode everything I was tall enough to ride and that trip was basically the best thing that had ever happened to me, ever. 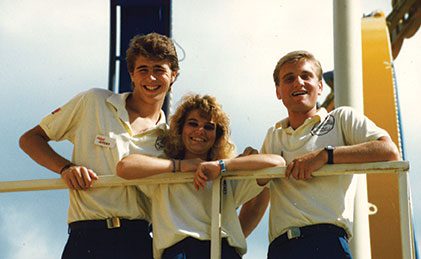 Later, after we’d moved to Utah in 1983, Lagoon would become an escape from the humiliations of adolescence, a place where a nerd could just be a nerd. Season passes in hand, my best bud from junior high, Clarence Habovstak, and I would ride the bus south on Orchard Drive to Farmington. We’d take laps on Colossus, perfect our techniques for getting soaking wet on the Log Flume and puzzle over these girls walking around everywhere. 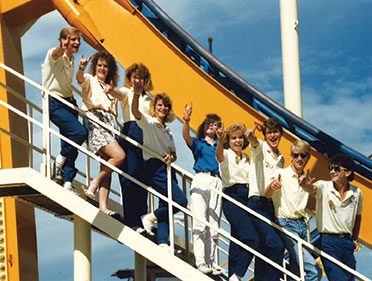 I loved Lagoon so much I got a job there at 15, and the summer before I started high school, I spent nearly every night roaming the midway, trying on different personalities and learning that the world wasn’t limited to the pious jerks I went to school with. I puffed my first cigarette at Lagoon and sipped my first  beer. I kissed the first of many girls at Lagoon, plus one guy  who really liked me. But I wasn’t exactly sure what to do with that. 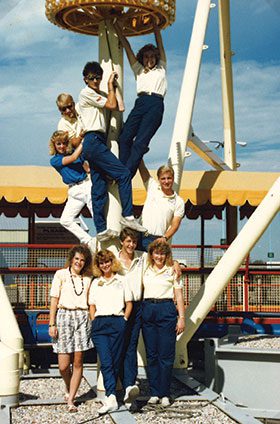 After high school, I returned with a job in Lagoon’s Entertainment Division—we mounted the various shows around the park. I was the stage manager of a walrus, a seal and a bunch of Peter Pan professional stunt divers who used to get stoned with the shootout show stuntmen before their performances. I was sort of the backstage kid mascot, listening wide-eyed to their stories of life on the professional diving circuit and JC college-level philosophy; they introduced me to Siddhartha. One of those guys taught me how to shave. The next summer, I worked a song-and-dance review called Music USA and learned the lyrics to every song in the show, which that year was “Music from the Silver Screen.” I passed dead time making out with one of the women in the show under the wooden rollercoaster. That was to be my last summer at Lagoon, college was on the horizon, but for an important stage in my life Lagoon was everything to me. 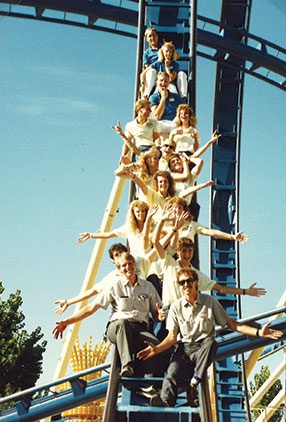 Lagoon taught me how to have fun, to change worlds and move among them fluidly, and how to be myself, even if I wasn’t quite sure who that was. It challenged strictures and norms and I learned the essential lesson that kids who weren’t Mormon weren’t monsters and that my dad’s record collection had cool stuff in it. The freaks, geeks and misguided weirdos at Lagoon weren’t just better than the squares at my high school; they were, I’d come to find out, residents of the the real world. A place filled with imperfect and brilliantly stupid people just trying to figure out their places in the universe.

I’ve been back to the park over the years. Lagoon, like me, is a little shopworn, despite regular updates. And it doesn’t belong to me anymore, not like it did, anyway. New thrill seekers are giggling in gaggles on line at the now octogenarian Roller Coaster. Still, Lagoon’s twinkly lights and screaming, clattering soundscape will always remind me of my first tastes of responsibility, danger and freedom. Plus, Colossus still rules.

Jeremy Pughhttps://www.saltlakemagazine.com/
Jeremy Pugh is Salt Lake magazine's Editor. He covers culture, history, the outdoors and whatever needs a look. Jeremy is also the author of the book "100 Things to Do in Salt Lake City Before You Die" and the co-author of the history, culture and urban legend guidebook "Secret Salt Lake."
Previous article
Springing Back: The good old days bubble up every year around this time.
Next article
No-Kill Utah Super Adoption