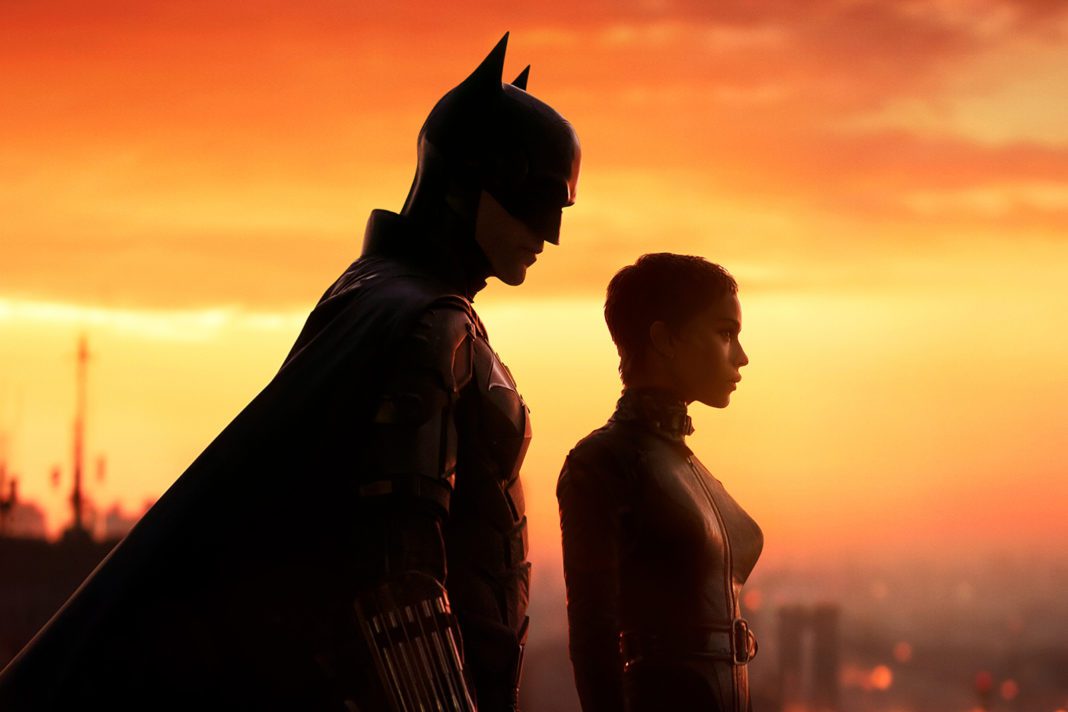 ‘The Batman’ Comes SO Close To Sticking The Superhero Landing

Let’s talk about Batman. Specifically, let’s talk about The Batman. The latest film to adapt the DC Comic title takes place two years into Batman’s (Robert Pattinson) vigilante mission, and he’s the darkest and grittiest and My Chemical Romance-iest he’s ever been on screen. It’s also one of the more compelling and coherent adaptations—not that it has much (or any) competition in that latter category—but, as solid as it is for the first two-thirds of its nearly three-hour runtime, the film struggles, in the end, to address the implications it raises and loses the thread entirely in the third act. Fair warning, there are spoilers ahead.

The Batman begins with the brutal murder of the mayor of Gotham City and not Bruce Wayne’s parents getting shot in an alley (which has been done enough). And, just like that, I was ready to let this movie do whatever it wanted to me. Also setting the movie apart from its forebears, Pattinson’s Batman is all Batman, almost entirely eschewing the alter ego of rich playboy philanthropist Bruce Wayne. Batman also gets to be a detective in this one. Not quite the World’s Greatest Detective, but, with the help of butler/father figure Alfred (Andy Serkis), a young Selina Kyle/Catwoman (Zoë Kravitz) and not-yet-commissioner James Gordon (Jeffrey Wright), Batman unravels the mystery laid out by The Riddler (Paul Dano), who’s been given a modern update with some internet-troll-meets-viral-conspiracy-extremist flavor. The Penguin (Colin Farrell) is here, too, but mostly to remind you that he has an HBO Max series coming out.

Like his predecessors, Pattinson’s Batman utilizes his money and gadgets and trauma-fueled determination to fight crime and addresses its systemic causes by punching poor people in the face. The Batman calls this logic into question, having Catwoman go as far as to suspect that Batman must have grown up rich. We also know that, during his two years as Batman, crime has gone up, and the film draws a straight line to that from corrupt city officials who use city coffers to pad their own pockets and leave Gotham’s most destitute with no choice but to turn to crime (and eventually get punched by a billionaire in a bat suit and thrown in prison). And it’s not the Caped Crusader who discovers this corruption but the film’s main villain.

Dano’s Riddler casts himself as a vigilante bent on exposing corruption by violently murdering dirty cops and politicians and leaving riddles and ciphers for Batman at every crime scene. The film is at its best while Batman and friends follow Riddler’s trail of clues, exposing (sometimes inadvertently) the deeply rooted corruption in Gotham’s government and police. Alfred, Catwoman and Gordon serve various purposes throughout the film. Largely, Alfred reminds Batman of his humanity, Catwoman reminds Batman of other people’s humanity and Gordon reminds him that there are those within the system and city who are still trying to do what is right.

Where the film is not at its best (spoilers ahead) is in the third act when Riddler spontaneously stops obsessing about corruption and how the city had abandoned orphans like him and decides to murder a lot of poor people by flooding the city. At the end, The Batman swings wide with the large explosions and unexamined repercussions of an action movie, instead of staying focused on the moral murkiness and Se7en-inspired neo-noir storytelling. It also throws in a radical tonal-shifting Joker cameo that serves no purpose (other than to remind us that, much like Batman, we will never, ever be free of this character for good).

The Batman finds Batman doing both what he does best and what he does worst and abandons the very questions it raises about those things in favor of spectacle. It’s frustrating, given how much I enjoyed the first two hours of this movie, but The Batman is still worth a watch in theaters. Fans of David Fincher will find a lot to like here, as well as fans of the comics Batman: Year One (written by Frank Miller, art by David Mazzucchelli) and Batman: The Long Halloween (written by Jeph Loeb, art by Tim Sale) and Batman and adjacent titles by writers like Grant Morrison, Tom King, Scott Snyder and many others.

Highlights also include the casting—Serkis, Kravitz, Wright and Dano make for a strong supporting cast, along with my favorite Skarsgård brilliantly chewing the scenery as a skeezy DA, and Robert Pattinson knows how to play a brooding young man full of anger and self-loathing. Compared to Bats past, “Battinson” is closest to Christian Bale in approach, but he’s (thankfully) not nearly as growl-y. Now, I have watched every live-action adaptation of Batman (and probably close to every animated one as well). As far as where The Batman ranks compared to other Batman films, they’re honestly hard to compare (the Schumacher films had ice puns and bat-nipples, after all). It strikes a tone most similar to Nolan’s films, but, thanks to the cast and sensical plot, I think I’d rather watch The Batman.

The Batman opens in theaters March 4, 2022; directed by Matt Reeves; screenplay by Matt Reeves, Mattson Tomlin, Peter Craig; 2h 56m run time. Official synopsis: Batman ventures into Gotham City’s underworld when a sadistic killer leaves behind a trail of cryptic clues. As the evidence begins to lead closer to home and the scale of the perpetrator’s plans become clear, he must forge new relationships, unmask the culprit and bring justice to the abuse of power and corruption that has long plagued the metropolis.

Christie Porterhttps://christieporter.com/
Christie Porter is the managing editor of Salt Lake Magazine. She has worked as a journalist for nearly a decade, writing about everything under the sun, but she really loves writing about nerdy things and the weird stuff. She recently published her first comic book short this year.
Previous article
Snowbird Gets New Wings with Updated Tram Cabins
Next article
Road Trip: Washington