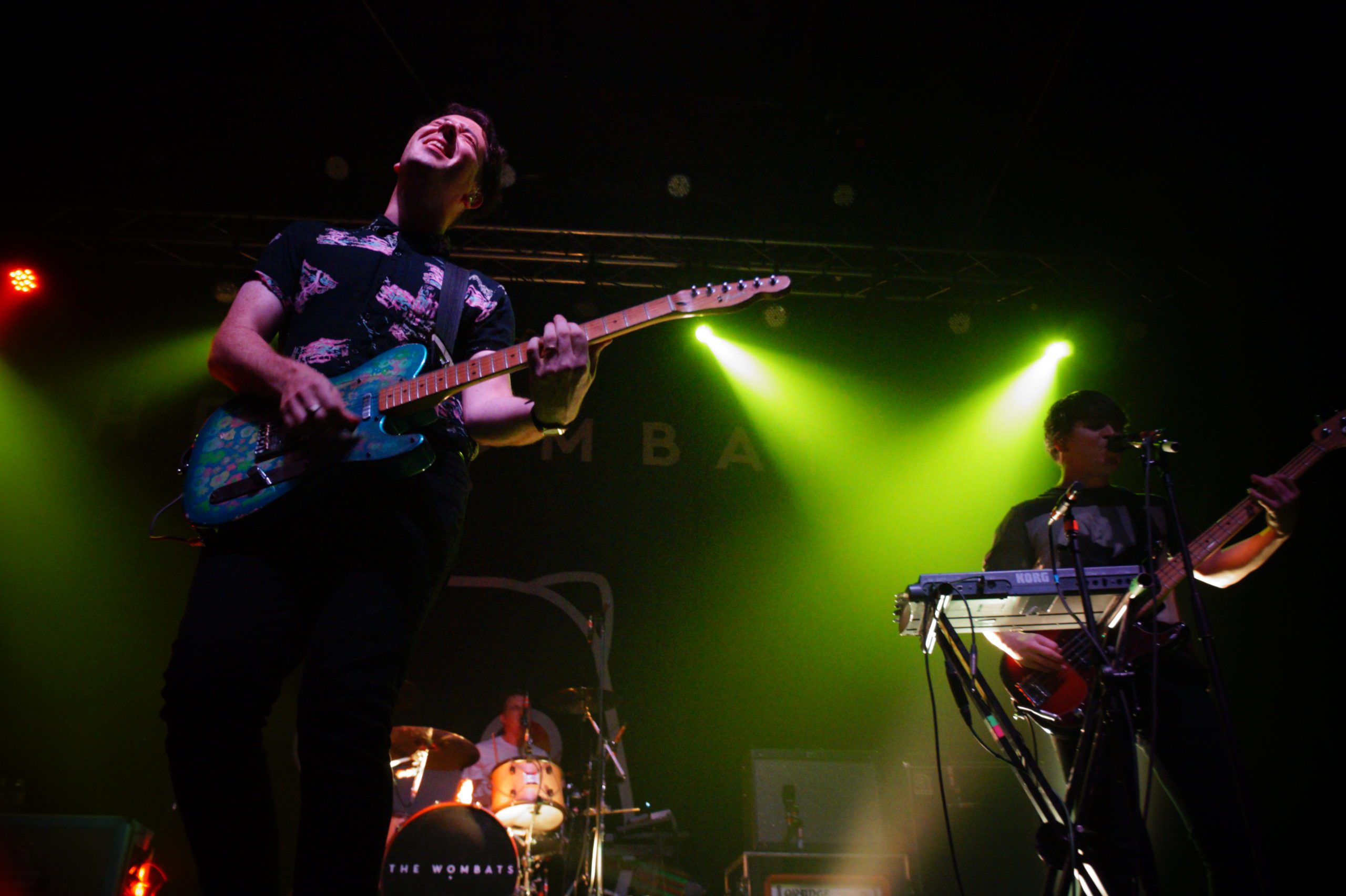 The Wombats and Barns Courtney Stun at The Complex

Last night at the Complex gave us a mix of old and new faces of indie rock that both hopefully give us many more years of music. The sold-out show seemed to draw fans of   Barns Courtney and long-awaited headliners The Wombats. Both were refreshing reminders that indie is still lyrical, honest, and thriving.

Barns Courtney and his bandmates gave the performance of seasoned artists, and it largely had to do with the music itself. True, the frontman has the swagger of young Julian Casablancas, which effectively drove all the girls nuts. His every move – from when he took off his jacket, to when he took a long swig of water and spewed it in the air (Sidenote: is that a new thing that rock singers are doing, or something?) was met with uncontrollable swoons.

Yet what’s even more remarkable than his wooing abilities is his delivery of indie rock with an old soul. The creeping, slow march of “Glitter and Gold” and the melancholy slice-of-life (hearkening Leonard Cohen) “Little Boy” is a prime example of what sets Courtney apart from his fellow long-coiffed, skinny-jeaned “bad boy” counterparts.

Any sour feelings about The Wombats show cancellation earlier this year was seemingly dispelled for attendees. They certainly were on my part, starting with their second song, “Give Me a Try.” At the risk of sounding trite and gushy, there is seriously an earnestness and sweetness to the track, lyrics, arrangement, and all – that makes it timeless. (It was hard to maintain my composure and camera steady, which may explain some of the blurry pics.) Indeed, hardly a song started where the crowd didn’t go into a frenzy. There was “Let’s Dance to Joy Division,” which was there to cheer up nihilistic millennials when they were younger, and newer fare like “Turn,” sans Halsey. “Oldies” came with “Bee-Sting” and “Tokyo – Vampires and Wolves.” Murph prefaced “Patricia the Stripper” by insisting to his absent mother, also named Patricia, for the umpteenth time that it wasn’t about her.

Murph’s dry English humor landed particularly effectively when after a song, he turned to his mates Dan and Tord and admitted there was an entire part of the song he’d skipped. “Somehow we’d skipped the chorus and went right to the outro,” he muttered, and they all shrugged. The exchange carried out for a good minute.

“What’s going on?” asked a guy behind me, to his friend.

“Who knows,” his friend replied, in an amazing monotone.

“This is our fake last song,” Murph said sarcastically before playing their fake last song and hardly disappearing before reemerging. Admittedly, I wish they had performed “Your Body is a Weapon” during their encore, because I imagine it would have been explosive live, but “Greek Tragedy” wasn’t a bad runner-up. A dude in the wombat suit even emerged out of nowhere and romped about with the guys.

For more photos from the show, go here.

Charissa Chehttps://saltlakemagazine.com
Charissa Che was born and raised in NYC and has been a journalist for over 12 years in news and arts and entertainment. She is a music contributor for Salt Lake Magazine. Additionally, she holds a Ph.D. candidate in Writing & Rhetoric at the University of Utah. She prides herself on following the best cat accounts on Instagram. Calicos preferred.
Previous article
Influential Women In Business: Liz Findlay
Next article
Utah’s Cheese Whizzes