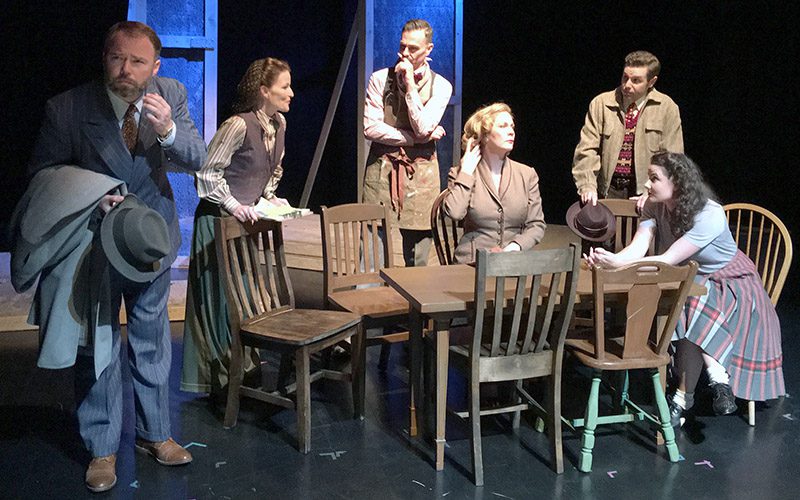 Eric Samuelsen’s play The Ice Front will make its world premiere at Plan-B Theatre Company on Nov. 9  and its WWII setting promises to be an examination of issues of ethics and morality. Set in Norway during the German Occupation, The Ice Front is a tense examination of the moment that Norwegian National Theatre company actors are “asked” to perform a piece of Nazi propaganda by their occupying masters.

What would you do? Of course, you have the benefit of historical hindsight to answer that question. The actors and the theater company in Samuelsen’s play have no such give.  They have struck an uneasy balance with the Nazi cultural authorities and their day to day survival depends on their willingness to go along, to, and this is a big word, collaborate. Do the players collaborate or do they risk their lives and resist?

It’s easy to throw around words like “collaborate” and “resist.” At this point in the now, they are just words. Big words, sure, but for now they remain part of a romanticized version of history that I think many Americans have failed to internalize.  For Western European under the boot heel of the German war machine, those words meant life and death. Samuelsen’s play promises to take us into that world and remind us of just how perilous peril can be, a glass of historical cold water to wake us out of our reverie.

The play runs from Nov. 9–19 at the Rose Wagner Theater.

Achtung baby! The play is already sold out, which a dilemma for this preview. But we have ways… of getting you into the show.

First. Plan-B’s wait list is a good bet. To get on the list, go to the box office at the Rose Wagner, one hour before show time. They go hang out at Squatters or something until five minutes before showtime.

Next, a $20 donation to the Utah Film Center will get you into the first preview night on Nov. 7.

And finally a $20 donation to the NOVA Chamber Music Series, will get you into the second preview night on Nov. 8.

Jeremy Pughhttps://www.saltlakemagazine.com/
Jeremy Pugh is Salt Lake magazine's Editor. He covers culture, history, the outdoors and whatever needs a look. Jeremy is also the author of the book "100 Things to Do in Salt Lake City Before You Die" and the co-author of the history, culture and urban legend guidebook "Secret Salt Lake."
Previous article
Exotic Cats Dropped From Dirk Arthur Show in Las Vegas
Next article
13 Days of Sweets