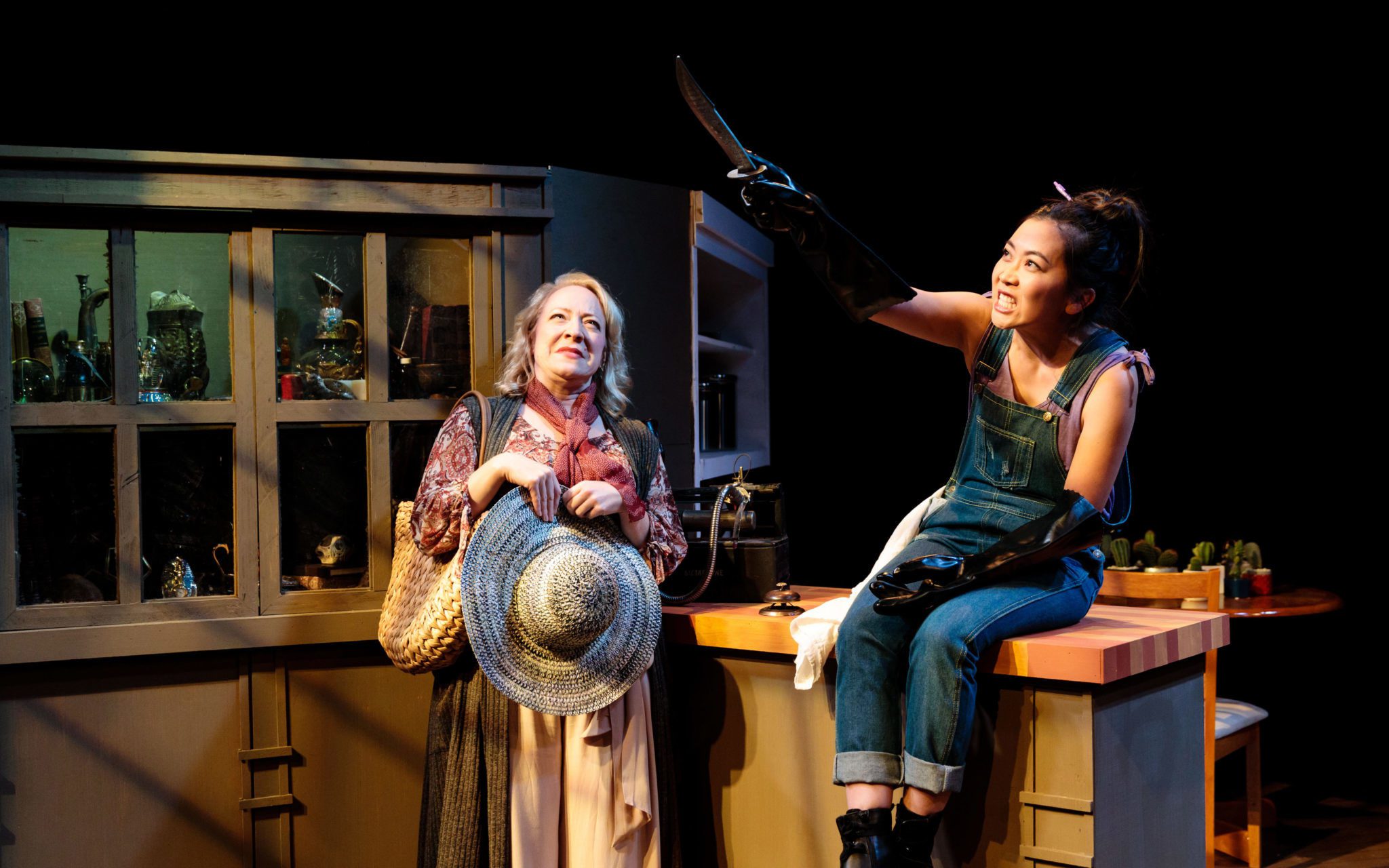 There are many plays out there that fall into a category that I like to call: “Alvy Singer rewrites his relationship history with Annie Hall.” Mercury, onstage now at Salt Lake Acting Company, falls into this category, only with more blood and a disemboweled bear.

I’m talking here about the propensity  of playwrights to fill their work with what always seems to me like the ghosts of arguments they’ve had in past relationships. They want to rewrite the fight to say all the things they should have said. Woody Allen’s character, Alvy Singer, in Annie Hall, is workshopping such a play at the end of the film and that’s where my mind goes whenever I see a piece that swims through these particular waters.

And here we have  Mercury the tale of two such revisionist couple fights. The first is between a pair of idle housewives who have been conducting an affair together under the noses of their absent husbands. Heather (Brighton Hertford) ends the liaison and her erstwhile lover Pamela (Dee-Dee Darby-Duffin) doesn’t want it to end. Elsewhere, another couple argues about the choice to move out of Portland to be closer to Nick’s (Max Huftalin) ailing mother. Nick’s partner Brian (Tito Livas), isn’t happy with the move. Meanwhile the neighbor lady downstairs, Olive (April Fossen), doesn’t care to much for the codependent arguments coming from upstairs.

Somewhere among the way, we meet Alicia (Lily Hye Soo Dixon) an eye-rolling curiosity shop owner who sells occult items that can be used to send people to hell, which is where playwright Steve Yockey is certainly going after drafting such a devilishly insidious play. (Sorry, I let the cheesy critic out for a minute and that sentence just had to be written.)

I’ll leave the plot recap unfinished but do keep an eye out for the disemboweled bear.

The battles among the couples, which includes Alicia and her boyfriend “SAM” (Aaron Adams) are the meat (excepting the bear thing) of this play and they unfold out like Yockey is channeling one of Dan Savage’s advice columns. And certainly each of these people could qualify for a DTMFA ruling at some point. We watch these three couples at their worst, their bloody worst. My favorite bit was Alicia’s argument with “SAM” in which she parrots some past couples-therapy session advice to win the day (with a demon of the underworld).

The whole cast is awesome as is the staging, a clever lazy Susan turned by a toiling Alicia for every scene change. Mercury is a master class on winning a fight with your significant other. It’s funny as f***, dark and super bloody.  And at some point there’s that dead bear. Skip the Nightmare on 13th and head over to Salt Lake Acting Company where the ghosts of the fights of relationships past are waiting to haunt you. Boo!

Jeremy Pughhttps://www.saltlakemagazine.com/
Jeremy Pugh is Salt Lake magazine's Editor. He covers culture, history, the outdoors and whatever needs a look. Jeremy is also the author of the book "100 Things to Do in Salt Lake City Before You Die" and the co-author of the history, culture and urban legend guidebook "Secret Salt Lake."
Previous article
Connect with Top Business Schools at The QS World MBA Tour Event
Next article
Giveaway: KUER's Snap Judgment